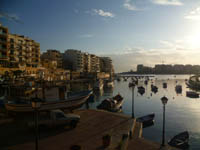 My name is David, and I am a sun-seeker escaping from the present gloomy climate (in more ways than one) in Ireland. I moved to Malta in 2011, for the reasons outlined above.

Relocating to another country is always going to present a certain amount of challenges. The fact that we did so within 2 weeks of making the decision to move did not make things any easier, but had the advantage of focusing the mind on the task at hand. I am still not 100% certain that my electricity account in Ireland has been closed but I prefer not to think about that too much.

We had booked a cheap hotel for the first week of our arrival, so that was how long we had to find a suitable apartment to rent. A lot of visits to estate agents ensued, and we were driven around the labyrinthine backstreets of Sliema and Gzira and St Julian’s looking at various options. Eventually, with the clock ticking down to midnight, we made our choice. In retrospect, we probably ended up paying more than was sensible but hopefully will not repeat that mistake in future.Are there many other expats in your area?

There are British and Irish expats all over Malta, particularly around the St Julian’s/Sliema area where we live, so they are not hard to find.

At first I found Maltese people to be direct bordering on rude. But I’ve come to appreciate that this is just the way people speak, and once you get to know them it is hard to find more friendly or hospitable people than the Maltese.

One of my main reasons for moving to Malta was where it appears on the map of the world. Or to put it another way: because the sun shines here more than just about anywhere else in Europe. I love hot weather and from April to the end of October that’s what you get here. Also, for such a small island it is surprisingly rich in culture and history.

Malta in winter can be a little glum. The whole country can sometimes give off that ‘after the Lord Mayor’s show’ vibe, like it’s just waiting for high-season to kick in again.

The British influence remains strong in Malta, so it is not massively different from home in many regards. However in the summer months, when the sun is beating down, there is definitely no confusing Malta with a cold and windy island on the edge of the Atlantic Ocean! Culturally speaking, it’s a small country so your options are necessarily limited. In saying that, I think Malta certainly punches above its weight in that regard.

Just about everything here is cheaper than it’s equivalent back home, so I can’t complain too much on that score, although it is slightly less cheap than I had anticipated before I got here.

Maltese food is heavily influenced by Italy, so pastas and pizzas are here in abundance. And the British are represented by the ubiquitous fry-ups (a particular weakness of mine). One Maltese speciality I’ve grown to like are the pastizzi’s: fried pastry with cheese or pea filling – not exactly good for the cholesterol levels. Maltese wine is surprisingly decent too, although I tend to stick with red rather than white.

For the survival guide on how to live, work and holiday in Malta visit David's blog How to Get By in Malta .