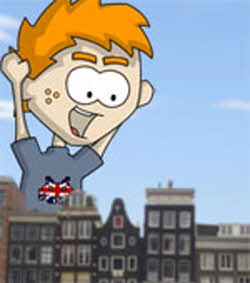 My name is Stuart. I’m an Englishman in his early 30s with a well documented reputation for accident proneness and bizarre situation finding. I moved to Holland to start working as a designer in the computer games industry. Originally this was only supposed to be a stay of sixth months but the tempting lure of “lekkere bitterballen” and good beer has turned it into a much longer stay.

My favorite colour is army green, my lucky number is seven and when I grow up I want to be a Ghostbuster.

I moved to Holland in the summer of 2001 but it was not really planned. It was kind of an accident but a happy accident none the less. A short while after I had finished college I tried to find a job in the computer games design industry so I could use my education as an excuse to play computer games all day.I was not having much luck in my search until I found a job advert in a computer game magazine. It was the strangeness of the cryptic job advertisement that caught my eye. It had no address, no phone number and hardly any other important detail printed upon the page. All it really had was a dot com email address to which I applied.

I waited for a reply while wondering if the strange cryptic nature of it all could lead to a situation where I wake up in a bath of ice in a basement somewhere having fallen victim to a gang of black market human organ dealers using a games company as a front for their diabolical scheme.

Since there had been no address in the advertisement or any indication of its location upon the globe I simply assumed the job was in Britain (since it was in a British gaming magazine). Not wanting to turn down a free day trip to another country I went for the interview, not really knowing what to do if I was offered the job… which I was.

All these years later I am still living and working in Holland. Plus I still have both my kidneys which is a bonus.

My company sorted out a lot of things for me during my move so I had very few difficulties other then mild culture shock. There are not any really big cultural differences from where I came but there are lots of little ones. The biggest challenge for me was homesickness. I’d never lived away from home until that point so it hit me doubly hard. However, moving to Holland has proved to be the best experience I could have ever had.

The language has also proved to be a big challenge. “Ik heb geen idee wat u zegt” (which translates as: “I have no idea what you just said”) was a sentence I used a lot in my first few years of living in Holland. My attempts to learn the language were slow at first mainly due to working for an English speaking company. I first learned to count to ten in Dutch by listening to the phone numbers for porn chat lines being read out by barely dressed excitable young ladies on late night TV. This is why I can count in a very sexy voice. However, I later found out there was no need to moan between each number. I decided it was best to start taking Dutch lessons but sadly these turned out to be far less visually interesting.

I’ve been very lucky. My first apartment was found for me by my company. Since then I’ve moved to different apartments and rented. It has been easy because every time I need to find a new place to live a friend of mine has been looking for a new house mate. For the past year I have been living with my Dutch girlfriend.

Amsterdam has a big expat community. My office is made up of maybe 50% Dutch and 50% other. I’ve also made a lot of expat friends outside the office from a lot of different countries.

Good. They have not chased me out yet.

I like how everything is much more laid back in Holland compared to how I (personally) find it in London. The atmosphere and character of the country is great. I’ve also had some great experiences and adventures while living in Holland, most of which I’ve written about on my website www.invadingholland.com

Don’t be afraid to ask for help and don’t be afraid if things do not go well at first. I almost gave up on living in Holland after a few weeks because I was feeling terribly home sick. If it had not been for the advice of a very good friend of mine I might well have gone home and never came back. He said to me, “Don’t be an idiot. You can come back anytime you want. Give it a few weeks before you make a stupid decision.” I’m very happy he said that because once I had worked through it and got used to Holland I discovered that I was extremely happy here and I continue to be so.

I always thought about staying in Holland. I just didn’t know for how long. Since I met and fell in love with my Dutch girlfriend two years ago I now know for sure that my future lies in Holland. We are currently looking for a new place to move to so we can start a family.