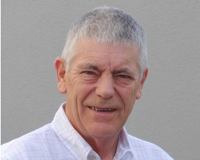 My name is Raymond Edwards and I live on the east coast of New Zealand in an area known as Hawke’s Bay, the main towns in this area are called Napier, Hastings and Havelock North.

I am a retired IT Project Manager having spent over 40 years in the industry working for Defence, Government and large corporations mainly as a consultant working for either myself or large consulting companies.

I am English born, moving to Sydney, Australia in 1968 when I was 21 years old and where I lived for 43 and a half years.I left England as I was sick of the inclement weather, the class issues that were prevalent at that time, and I felt that there were greater opportunities abroad (I also considered Canada and South Africa).

I believe that this was one of the best decisions that I have made. I lived in Sydney, Perth, Melbourne, Canberra and finally Brisbane and became an Australian Citizen in 1982. I consider Australia to be my home and where my heart is. However, in 2000 I met and fell in love with my now wife who was also living in Brisbane (we married in 2006). She is a New Zealander and, while we dated and enjoyed living in Brisbane for 12 years she always yearned to return to New Zealand, her real home and to be near her two children and, probably more importantly, her grandchildren.

As a consequence, we moved to New Zealand in early 2012.

In all honesty, there were no significant issues related to the move. Of course, we made some mistakes in deciding what we should and should not bring with us. We were downsizing from a very large 5 bedroom house (with a large mortgage) to a smaller 3 bedroom townhouse and so we had to unload a lot of stuff and make some hard decisions as to what we really needed. As it turned out we still brought too much and so for the first year we sold a lot of items on eBay and TradeMe (a New Zealand version of eBay), which helped pay for those unexpected expenses that always occur when you move.

The transportation of our goods went really well with no need to consider an insurance claim and only some very minor damage to fragile items as a result of the move from one country to another.

Initially we decided to live in the same city as my wife’s children (Nelson, South Island of New Zealand), we had visited Nelson (on the South island of New Zealand) several times before we made the ’big decision’ and the last time we came in the middle of winter (July) and found that it was VERY cold and often below zero degrees centigrade in winter, a big shock after living in hot and humid Brisbane. So my wife and I researched the weather patterns over New Zealand to determine the best and most suitable weather and realised that Hawke’s Bay was the best climate, without going too far North of Auckland. In addition, the price of houses was less than Nelson and certainly much less than Auckland, which is ridiculously priced.

To confirm our decision we took a holiday in Napier and looked at many properties in the Hawke’s Bay area deciding on Havelock North as we loved the village lifestyle and the fact that, in two minutes, we could walk to the centre of the village with many restaurants, shops and a supermarket and there is a large town (Hastings) only 7 minutes away by car. So we put in an offer on a modern townhouse that we liked, which was accepted.

There are a lot of people from England here in New Zealand; I guess they were all fed up with the weather in England as I was. They certainly seem to be in the majority, not many Australians though as I believe that many New Zealanders are moving to Australia (647,863 New Zealand citizens were living in Australia in 2012) looking for greater job opportunities, higher income and better weather, rather than the other way around.

Note that in 2011 the current population of New Zealand was 4.5 million. In addition, there are numerous different nationalities, including Indian, Korean, Chinese, Taiwanese, American, etc, but they are in the minority. In 2012 there were 682,200 Maoris living here in New Zealand (around 1 in 7, according to Statistics NZ’s latest estimates).

The locals here in Havelock North are VERY friendly and we have made several friends here, which at our age (over 65) is encouraging (I have found that the older you are the less friends you tend to make – my wife and I still have lots of friends we met at an early age).

We walk most days and it is so refreshing to say hi to the people we meet and get a great response. In addition, when we go into shops and restaurants we also get a very positive response. We find that people are usually willing to have a chat and spend time, something that we didn’t experience in the hustle and bustle of Brisbane; probably because of the size and pace of the place.

We love the slower pace of life, no rushing from here to there, getting stuck in traffic for hours travelling to, or from work, or going shopping. In addition, we now get to experience the four seasons of the year (in Brisbane you only seem to get summer and winter). I just love watching the trees changing colours, especially in autumn.

We also like the convenience of walking to anything that we need, although I do have an electric bicycle, which means that I can get to anywhere I want in next to no time.

The friendliness of the local people that we meet each day is just great.

There is a greater emphasis on the cost of health care (and most all government services here) and, as a consequence, lower levels of care than I am used to in Australia.

In general, the cost of living is relatively high (especially the cost of petrol, electricity and groceries), but the average income is low, resulting in a lot of people living in a less than ideal situation. There seems to be a far too big a gap between the rich and the poor and the current government hasn’t addressed this problem. New Zealand seems to be split in two – those living in Auckland (1.5 million in 2012) and those who live in the rest of the country. From a lot of perspectives, they seem like two totally different places to live, but both very ‘liveable’.

There is an ongoing concern regarding the possibility of a significant earthquake as there was in Christchurch (February 2011), many, many people have still not been able to rebuild their homes due to issues relating to the lack of payment by insurance companies so that work rebuilding homes and offices can commence. There are also failings with the New Zealand Earthquake Commission, an ineffectual New Zealand Government agency providing natural disaster insurance to residential property owners. Of course a side issue of this is an increase in the cost of all housing insurance to all New Zealanders.

The number one consideration for anyone moving from one country to another is ‘do your homework’ and plan every little detail relating to the move. Also, make sure that you document all the things that you like and the things that you dislike about your current situation and do the same for the new location ascertained by undertaking thorough research. Naturally, if you have a partner it has to be a joint decision, and you both need to commit sincerely to the move.

In particular, understand your financial situation and be aware of any house price fluctuations (we lost about $100,000 on our house in Brisbane as the prices dropped significantly, this was to be our retirement fund, so now we both need to work as we have found that you cannot live on the pension alone, even though we have a freehold home).

As mentioned, we will need to continue working just to make ends meet. My wife is working as a wine demonstrator and I will continue with my internet marketing venture.

Our goal is to make enough money so that we can see our daughters and our grandchildren on a regular basis. In addition, we would love to travel both within New Zealand and overseas and also do some badly needed maintenance on our house. In addition, my wife will continue with her interests in gardening and painting and I will continue my interest in radio controlled model aircraft.