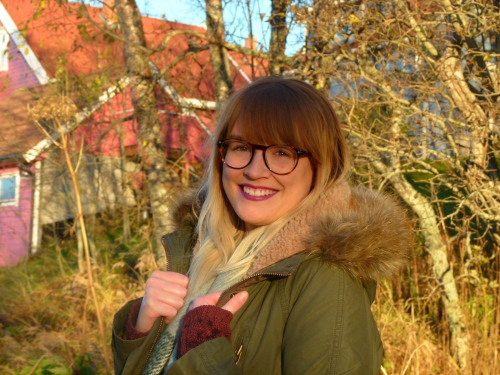 My name is Vanessa and I’m a 25 year old German who moved to Tromso in Northern Norway 2 years ago. I’ve just finished grad studies and am now working as a consultant for digital marketing and blog about my life and travels in the North at Snow in Tromso.Where, when and why did you move abroad?

I moved to Tromso in 2014 to pursue grad studies at the Arctic University of Norway. I’ve always wanted to live in Scandinavia and found the perfect master program in Tromso.

My biggest challenge in Tromso was finding adequate housing. The housing market in the city is very tough and I had to live in tight student dorms where I had to share the kitchen with 20 other students at first, before I could move into a flat-share.

Yes definitely and I was so surprised about that. The Arctic isn’t exactly your typical relocation destination but there are lots of expats in town, either studying at the university or working in one of the many international science centres in Tromso. And not just people from the neighbouring countries – I have friends from Canada, Nepal, Ghana and New Zealand!

I like the slower pace of life. In Germany, life was always stressful and hectic and people were rushing from one place to the next but in Norway, life is a bit slower. Work-life balance is very important here and even though I work full-time, I still have enough time to blog which is something I probably couldn’t do to this extend in Germany.

I also like that nature is just off your doorstep here in Tromso – no matter where in town you live.

We’re surrounded by beautiful fjords, mountains, and even beaches! Plus there’s nothing better than watching the Northern Lights in winter!

Tromso is not the cheapest place to live in, nor is it easily accessible. I wish I was able to travel more easily but there are few direct flights to/from Tromso making travelling more expensive and time-consuming. The tough and expensive housing market and the lack of variety in supermarkets are other things I dislike.

Like I mentioned, there’s a slower pace of life here in Norway. I get to enjoy more freedom at work and Norwegians aim for everyone to feel at ease and get along with each other. Conflict is not something you encounter in Norway very often and although this can be difficult to get used to if you come from a culture where problems are openly spoken about, the Norwegian way of handling things could definitely be described as more peaceful and relaxed.

Be prepared for a tough housing market. Start to look for available flats as soon as you arrive and lower your expectations. A 2 bedroom flat for under 10000 NOK probably comes with some major downsides. Also look into buying a car. Even though there’s public transport in Tromso, busses often run late which can be an incredible pain in winter especially, and there are almost no connections to places outside of the city. So if you want to go hiking in the mountains or try to spot a whale in the fjords, it’s pretty much a must to have access to a car.

I plan on staying in Norway for the foreseeable future but would like to move to the south to be able to travel more easily. I’m in my third year of living in Tromso now and even though I really like the city, its location in the Arctic makes it lacking things you have easily available in other, more southern, Scandinavian cities.

You can keep up to date with Vanessa's adventures on her blog, Snow In Tromso.