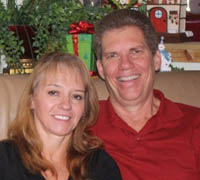 We are Clyde and Terry Coles from Corpus Christi, Texas.

Being a fire-fighter for 26 years was the best job in the world according to Clyde but it is not a job for an old man. At the age of 57 he decided it was time to leave the department but was still young enough to want some fun and adventure. I was happy to check out of the working world at age 51, but wasn’t ready to sit in a rocking chair. We pulled off our cowboy boots and put on our salsa shoes to dance our way into a new life in Panama.

With the sky-rocketing costs of healthcare in the U.S., an ex-wife that was entitled to part of his retirement, and so many other expenses to eat up his pension, Clyde searched for a better way. He read a few articles about baby boomers retiring early and moving abroad and asked me what I thought. Sceptical at first but if the option was to keep working for another 15 years; I was willing to make a change. He looked into other countries like Belize, Costa Rica, and Equador before focusing in on Panama.Panama boasts that it offers one of the best retirement packages in the world and makes it relatively easy for foreigners to move into their country. Anyone with a pension can apply for a “pensionado visa” which offers all types of discounts on travel, healthcare, utilities, meals and more. This type of residency visa allows us to stay in the country for as long as we want while maintaining U.S. Citizenship.

Since we have only lived in Panama for a little over three months now, we still have much to learn. Despite a few bumps in the road we have embraced the changes with open arms.

Clyde turned 57 on September 3rd, the same day we arrived in Panama to begin our new lives. Within a few hours of our arrival he lost his passport somewhere between a hotel lobby and a grocery store. We had to file a police report the next morning and then find the American Embassy to apply for a new passport. When living abroad the passport becomes a lifeline and the only real form of identification that matters. Even though we had a copy of his passport, losing the passport made us feel helpless and alone with no one to turn to.

On our first trip to Panama we decided that we wanted to live within an hour of Panama City. Later that year on an expat board someone posted a house for rent in Capira for $300 a month. Clyde sent an email for more information and pictures of the house. The little town of Capira sits about 45 minutes from Panama City at the foothills of the Campana Mountains. It’s a fifteen minute drive from both the beaches and the mountains and 30 minutes from Coronado. After researching all that we could find out about the area, we saw pictures of this lovely three bedroom, two bathroom house and decided to seize the opportunity. We signed the contract on the house in June and moved in September 2010. We thought it would be a good idea to rent at first to make sure that Panama was right for us, and to decide just where we wanted to live in the country.

To our surprise there are many other expats in the area from all over the world. Capira is located fifteen minutes from La Chorrera, the second largest city in Panama. There are about 60-80 expats in La Chorrera and we have the opportunity to meet once a month at mixers. Thirty minutes in the other direction is the beach community of Coronado where about 100 expats live. Our lives have been enriched with a new circle of friends from all over the world.

In any country a smile goes a long way. We have discovered that when we approach the locals with a smile and attempt to speak some Spanish, we are accepted with open arms. Usually we start out telling them in Spanish that we are learning the language, which makes them laugh and speak slowly trying to bridge the gap between us. Some locals that know a bit of English will try to speak it to us. We live in a small Panamanian neighbourhood where no one speaks any English. We’ve introduced ourselves to our neighbours and they were all impressed to see that the gringo’s do speak some Spanish.

We love the simple, laid back lifestyle, fresh air, cheap produce and low cost of living. Our last electric bill in Panama was $22.00 compared to our last one in Texas that was $249.00

We regret not knowing enough Spanish yet to chat with the locals. We both like people and want to get to know them and find out what makes them tick. But with hard work and determination we know in time we will speak more Spanish and be able to submerge ourselves more into Panamanian culture.

Because Panamanians don’t make much money, they’re lifestyle is much different than that of an American. Houses are small with only cold water, no air conditioners and some don’t even have windows. Instead of windows some homes have cement block pavers in them just to let a little light in. Even the Laundromats in Panama have washers only, no clothes dryers. Many locals don’t drive instead they walk, ride buses, horses or bikes.

Although there are plenty of big grocery stores, we love to shop at the roadside produce stands. Fruits and vegetables are so cheap and fresh at the little stands. We can buy a weeks worth of produce for a few dollars. And we love to drink fresh coconut water right out of a green coconut for a mere 60 cents.

Clothes are cheap compared to the U.S. and I love to buy $2.00 shoes and jeans for $4.99. But like the saying goes, “you get what you pay for” and we have noticed that stuff here is made cheaper and clothing is not made to be dried in a clothes dryer since the locals hang clothing out to dry. But who cares how long the shoes last when they cost so little.

The biggest shock in the grocery stores is the absence of packaged, processed foods. When we first moved here we noticed our clothes getting looser since we were eating fresh foods and nothing that came out of a box. And they don’t merchandise like they do in the states so we had to figure out where to find things. For example, I wear rigid, gas permeable contact lens and usually buy lens solution in any drugstore or department store. I couldn’t find it here and finally asked a pharmacist and was told to go to an optical store where they sell glasses. There it was for about half the price I was paying in the U.S.

What do you think of the food in your new country What are your particular likes or dislikes?

Coming from south Texas where Mexican food was a staple in our diet, we’d become accustomed to hot and spicy food. Panamanian food is bland with little to no flavour. A typical meal for the locals is white rice covered with pinto beans with some meat thrown on top. But with a little patience we have been able to find many types of food including Mexican, Italian, Columbian, Cuban, great fresh seafood and anything else you could imagine.

Learn Spanish first!!! We know enough to get by in every day situations, but still every problem we have had has been due to a misunderstanding due to the language barrier. Another suggestion is to not bring too much stuff from the states. We shipped a living room set, Clyde’s tools, clothes and about 30 boxes for a cost of $6000. It took two months for the stuff to get here so we had to buy similar stuff in the meantime. If we had to do it all over again we would have come with a few suitcases only, and sold the other stuff back in the states.

We plan to travel and write about our experiences along the way. Maybe someday we’ll find an inexpensive house to buy, but for now we’re enjoying our cheap rent house and exploring our new country. Moving abroad is not for everyone, but for those willing to embrace the change it can be a rewarding, life altering experience.

Clyde and Terry share more information about life in Panama and the challenges they face through their blog Along The Gringo Trail.