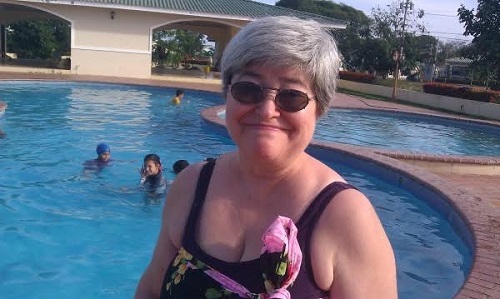 I’m Susanna Perkins. I’m a writer. Married, with 5 grown kids and 1 granddaughter. Interested in music, mysteries, language, and anthropology, and of course, travel. I have an undergraduate degree with a double major in English and Comparative Mythology. (I’ve never been content doing things the easy way.)Where, when and why did you move abroad?

I always tell people to use my experience as a cautionary tale – do as I say, not as I did!

In March, 2009, I lost my job. I’d been writing reports for a lawyer who monitored compliance in the banking industry, and our single client was a multinational bank under orders from the FTC to maintain this compliance monitoring program.

We thought we were safe. Until the morning my boss got the call from corporate headquarters saying, “They held a meeting in England yesterday, and they’ve decided to close down all consumer lending in the US. So they’re shutting down the program. Sorry.”

My boss scrambled to find other clients, but with the economy falling apart, he couldn’t. His business folded, and we were all out of work.

After that, I applied for over 200 jobs, and garnered a single interview.

Meanwhile, my husband, who had gone back to school for his Master’s Degree and graduated the previous May, was unable to get a teaching job because the schools in our area laid off more than 3,000 teachers.

The situation was desperate and rapidly getting worse.

I’d been dreaming for most of my life about spending time in another culture, and before this happened I had started reading online about retiring overseas. We decided to pursue living abroad, and quickly narrowed our country search to Panama. It was close to the US, and we could afford to live there on a single Social Security check.

We went for a quick visit, spending a week looking at David, Boquete, and Las Tablas. We fell in love with Las Tablas as soon as we pulled into town.

After returning home, we sold off everything we owned, and found a good agent to handle renting out our house. (The market had tanked so badly that the house was worth less than we had paid for it 12 years before.) It took about a year to do all this, and in March, 2012, I headed down to Panama to find us a place to live.

I was able to find a pleasant three-bedroom furnished house in a nice area for $400/month, so my husband shipped the dogs down and joined me.

Our biggest challenge was the transport for our three dogs. The airlines have strict rules about not flying pets when the temperature on the tarmac is going to be 85 degrees or higher. Since we were flying them from Orlando to Panama City, in April, there wasn’t ever going to be a day when one place or the other wouldn’t be hotter than that.

We finally hired a pet mover to help us. It wasn’t cheap, but they actually picked up the dogs and drove them to Miami, then flew them on a cargo plane at night and delivered them to my husband’s hotel in Panama City in the morning.

Las Tablas is a smallish town, with a population of around 10,000 during most of the year. (At Carnaval it explodes to over 100,000!) There’s no expat organization there, but I estimate there were about 100-150 expats there, depending on the season. During the winter months, there’s a big influx of Snowbirds from Canada and the northern United States.

What do you like about life in Las Tablas?

People are very friendly, and it’s easy to make friends – expats and locals. We had a busier and more satisfying social life there than we’ve had anywhere else. Partly that’s because eating out is so inexpensive that it’s no big deal to impulsively meet friends for lunch or dinner.

It’s also pretty normal for people to just stop by, something that almost never happens where we’ve lived in the US.

Our house was about 10 minutes from the beach in one direction, and 15 in the other. Beaches near us were usually deserted, except on Sundays. If we wanted to cool down, the mountains were just a few minutes to the west.

The food in Panama is very bland. You’d think it would be spicier, more like Mexican, but it’s not. Also, the only movie theater in our area (about 30 minutes away, in Chitre) didn’t show movies in English. If they were showing an American film, it was usually pre-dubbed in Spanish (without subtitles). So we never saw a movie in Panama.

Other than that, my only complaint is the lack of chiropractors in the country. I’ve had some ongoing back/neck issues, and there was no way to get them treated there.

What is the biggest cultural difference you have experienced between Panama and life back home?

Panamanians are noisy. Since the country is hot and air conditioning is uncommon, people live with their doors and windows open, and many have large outdoor living spaces where they eat, watch TV, etc. There’s no way to not hear your neighbors, unless you live way out in the country. Most of the time it’s not a problem, but if you have a neighbor who loves music you don’t, it can be an issue.

There’s litter pretty much everywhere. It’s a lot like the US was before we developed an environmental conscience in the mid-60’s. They are starting to educate the kids about litter and garbage, and there’s a growing awareness of the problem, but it will take a long time to improve.

What advice would you give to anyone following in your footsteps? What are your plans for the future?

Take more time to find a good place to live. We were desperate, and made a hasty choice that turned out alright, but I’ve heard plenty of stories from others who weren’t so lucky. Even if you take more time, rent before you buy, for at least 6 months and preferably a year.

We are actually in the US right now. We returned because my husband wanted to be closer to his elderly parents (they’re both in their 90s). We figure we’re here for another 2-3 years, and then we’ll head overseas again so I can actually retire. Not sure whether we’ll go back to Panama or try someplace new. Panama’s attractive because it’s close, but it’s a big world out there and I’d like to experience more of it.

You can keep up to date with Susanna's adventures in Panama on her blog, Future Expats.