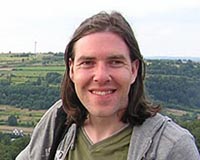 I’m Anthony Casey. I was bored with the UK, struggling to find work in my own field as a freelance writer, journalist and editor, and wanted something new. So I came to Kraków, Poland.

The ‘why?’ has many answers. I loved the Top Trumps card game as a child, and my favourite set was ‘Cities of the World’; in that set, my favourite card was Moscow – the domes of St Basil’s looked, to a five year old, like sweets. And that’s probably where a fascination with Central and Eastern Europe began. It helped too that my uncles were giving me Solidarity badges in the 80s, when I was far too young to understand what was happening… to cut a long story short, many, many years later, I visited Prague, then Moscow and St Petersburg and more… and through a friend I met in Russia I came to Poland.It was love at first sight; most of my non-Polish friends came to Kraków because they fell for a Polish girl – I fell for the whole country. Poland is not the easiest of mistresses at the best of times, but it’s the most rewarding.

Very few. I think I was extremely lucky to choose the right city, the right hostel for the first month, and the right time. I know that most new expat experiences are spotted with ‘we’ll laugh about this later’ mishaps, but really, it went like a dream. I packed what I need into a bag, gave the rest away, and got on a plane.

Gumtree. This global network should be better utilised! Of course, there were language problems, but they were not so difficult to overcome. And there’s no agents’ fee if you deal direct with the landlord.

Loads, and I’m in two minds about that. Kraków can sometimes be a bit cliquey in that expats form their own communities. On the other hand, everyone needs to feel that there’s someone they can relate to.

Well, most of my friends are Polish, but generally it depends on where I am. In the suburbs and villages, there’s still a sense of awe about ‘the West’, and I find that very unnerving. On the other hand, if you’re about to be mugged, use your very best English accent – your potential assailant will run a mile rather than risk making a mistake in a foreign language. I really must add, though, that you are very unlikely to encounter violent crime in Polish cities, unless you really, really push your luck. It’s one of the safest countries in Europe that I know.

Nothing – in Poland, I’m home.

Religion. Whether or not Poles are Catholic, they’re still in my experience kind of genetically Catholic. This pervades everything, and you’d be hard-pushed to find a Pole even in Kraków who, though they are absolutely and completely ‘atheist’, does not still hold on to at least some traditions. It’s easy to understand, as church and state in Poland are connected through Pope John Paul II’s efforts on behalf of Solidarity and many other struggles – but my experience is that it runs much deeper than that. For example, this is a country in which vasectomy and abortion are still illegal – and whatever your own personal views on these issues, it does set Poland aside from the rest of Europe.

Good quality clothes and shoes are much more expensive in Poland. Good quality, locally produced food is much cheaper. I guess it evens out.

Polish cuisine rocks! I haven’t found anything I don’t like, and the latest reports even suggest that Poles eat more fruit and veg than any other nation in Europe. True, they eat an awful lot of meat too, but vegetarians are well-catered for, in the cities, at least.

Pick the country you love, walk to the edge, close your eyes, and jump.

Read more about life in Poland at http://inside-poland.com/krakow.html or contact Anthony by email:krakowpolska@anthonycasey.pl