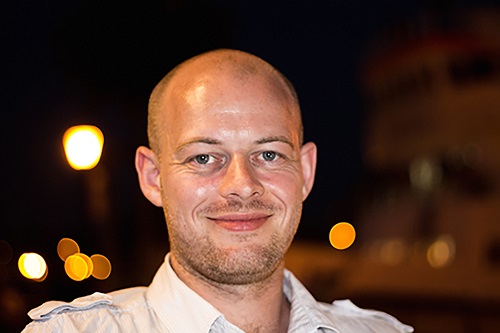 My name is Matt Sutton, I’m 36 years old and originally from Surrey, UK.

I came to Krakow, Poland in January 2011 just after my 30th birthday as I was working for a large online travel company who were moving their operations to Poland.I was initially due to be out here for a 9 month contract and then go back to the UK, but plans changed and my contract was extended and eventually made permanent. Despite arriving to -20C temperatures, I quickly grew to love the culture and atmosphere in Krakow, and Poland. I decided to stay for many reasons, but the main one was that I had met a lovely girl who would later become my wife.

The move was actually fairly straightforward as I was relocated by my company so I initially had a company apartment in the city centre and paid expenses, along with my UK salary. When I was moved to a Polish contract I obviously lost all of that, so the adjustment was a challenge. However, this also caused problems with the tax office in Poland, and I ended up with a huge tax bill which was eventually paid by my company. I’d definitely advise anyone in a similar situation to get professional help on their taxes. You also need to register for temporary residency if you intend to stay over 3 months, and eventually permanent residency and the queues can be huge, so don’t leave it until the last minute.

One of the great things about having so many shared service centres and outsourcing centres in Krakow is that it draws in people from many different places, so there are a lot of expats. Most of the places I’ve worked have included people from all over Europe and sometimes further afield. There are also a couple of very active Facebook groups for expats in Krakow and Poland.

I love the culture in Poland, they have kept hold of a lot of traditions which I feel we have kind of lost sight of in the UK. Holidays like Christmas & Easter are more traditional and less commercial. The weather is excellent, you get used to -20C temperatures in the winter and it can get up to 40C in the summer. I also really enjoy living close to the mountains, which I still find breath-taking every time I see them. There is so much to see and do in Poland, and it has such an interesting and diverse history. You are also extremely close to many other countries, within a few hours I can be in Germany, Slovakia, the Czech Republic or the Ukraine.

I really hate driving here, I used to love driving and fast cars in the UK but now I despise driving far. The standard of driving is really not good and actually quite aggressive, almost to the point of being bullied by other drivers. I also miss the diversity of food in the UK, it’s a lot more seasonal here and you tend to always buy the same things. I’d give anything for a decent curry!

The bureaucracy is also pretty bad and there isn’t much that can be done online, you have to visit the local offices and hope the staff are in a good mood that day. It’s also really useful if you learn Polish as not many of the older generation here will speak English. It’s normally ok in Krakow and larger cities, but if you move out to the countryside there will be a lot fewer people speaking English.

Of course I also miss my family, despite having a new family here in Poland.

I’m a bit of a foodie, so I’d have to say the food is the most different. It’s a lot more hearty and warming here, which is great in the winter months, like Smalec which is pork lard with salt and pieces of sausage & onions spread on bread, or Golonka which is pork knuckle. In the UK, I could go to the local supermarket and buy all kinds of international food, like Mexican, Indian, Chinese and many more, but in Poland it’s pretty much just Polish food. Although some of the supermarkets are starting to get more Asian and Mexican food, and I can even buy some English food from my local supermarket now.

It would depend on why you are coming to Poland? Is it for studying at one of the many top class universities? Or to work and live? Krakow is a University city so it’s vibrant and full of life except when the students are on holiday, then it’s much quieter and pleasant. The nightlife in the city is amazing, and there is something for everyone. If you are coming to work here, then there are a lot of opportunities thanks to all the companies who have moved here in recent years. If you have a finance or IT background then you shouldn’t have any issue finding something. But be aware the average salary is a lot lower than the UK, unless you are specialised or in a management position, and the cost of living is not as cheap as it used to be.

In the past 6 years, I’ve seen prices for rental properties in the city almost double, so you either need to be prepared to spend more or move outside the city limits. The cost of other living expenses is also not as low as you might think, plan ahead for your heating bill in the winter and buy clothes before you come as they are actually more expensive here than in the UK.

If you can, try and rent here for at least a year before you fully commit as you need to experience all the seasons and see if it is something you could handle on a longer term.

I’m happily married and own a house here now, plus I have a great job so I have no plans to leave Poland. It will depend on what happens with Brexit, but I’m already planning ahead for that and will do whatever it takes to stay.

You can keep up to date with Matt's adventures on his blog, Targowiskoklaj.

Would you like to share your experience of life abroad with other readers? Fill in the questions here to be featured!