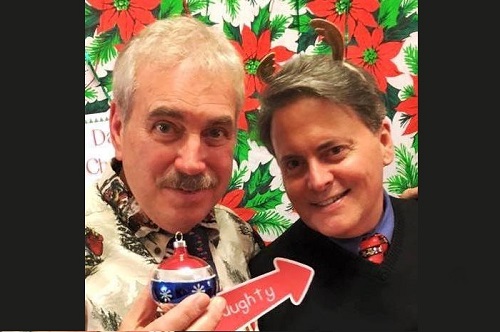 My name is Bruce Joffe. My partner (husband) is Russ Warren. On January 25th, we celebrated our 30th anniversary. A “retired” university professor, church pastor, public relations executive, and publisher (six books, six magazines) – I do like alliteration – I retired four years ago and moved with Russ and our three dogs to Portugal. Fifteen years earlier, we had purchased a vacation bolt in southern Spain … which we visited twice each year for about three weeks per visit. When it came to permanent residency, however, we decided that Portugal was a better move for us than Spain.

We purchased our home in central Portugal (Castelo Branco) after several “scouting” expeditions five years ago. Early in March 2017, following Donald Trump’s inauguration, we packed up and moved to Portugal. We wanted peace in our lives and to be around peaceful people. We love the beauty and history of Portugal, as well as the character of the Portuguese people.

The usual bureaucracy, complicated by moving our three dogs with us in the airplane’s cabin. The day of our flight from Green Bay, Wisconsin > Milwaukee, Wisconsin > Chicago > Pittsburgh, all airports shut down (for two or more days) because of blizzard conditions and tons of snow. Ultimately, we had to “live” in our airport motel for almost a week before new travel arrangements could be made for the five of us. Good thing we had purchased travel insurance!

Given the time restrictions on our pets’ passports, we had to go back to where we’d lived and have all of the paperwork redone. We landed in Madrid and rented a car for the drive to Portugal. En route, we learned that the law required dogs to be tethered in the back seat of the car using small leashes attached to the seat belt buckles. We also discovered that we needed a “Via Verde” pass to transverse Portugal’s highways. Securing the latter (without any knowledge whatsoever of Portuguese) was a bit of a challenge!

We obtained D7 residency visas, working through the Portuguese embassy and consulate in Washington, DC. Churning out the paperwork proved easier and less cumbersome for legal (i.e., tax) residency in Portugal than Spain.

Let’s put it this way: We have no debts – no mortgages, car payments, or credit cards to pay off – and we’ve been able to divide our time between three homes – our original expat getaway in Andalucía, Spain … our first home in Castelo Branco, Portugal … and a second home that we purchased on the border between Portugal and Spain, in Elvas (near Badajoz). We live on my meagre social security payments – about US $2,000 per month. Our costs are about $1,500 per month, including upkeep, utilities, and maintenance on all three of our properties. We live comfortably, if not frugally, and believe that anyone who truly wants to can live abroad as an expat or immigrant.

Yes. We have accounts at two Portuguese banks and still use our two USA credit union (bank) accounts. Transferring money monthly between accounts has become a game of cards, a game of thrones.

We knew where we wanted to live. We knew what we were looking for. We knew how much we were able to spend. From back in the USA, we explored available properties through such property portals and search engines as Idealista, OLX, and several others. Once we narrowed down our options, we contacted the property agents for each and made plans to fly over to see the properties. All told, we made three exploratory trips before purchasing our property. All things considered, we made the right decision to engage a Portuguese immigration attorney to handle the purchase of our homes, obtaining our NIFs, and opening a bank account.

Enough. We chose not to live in an expat “ghetto,” so that we could be closer to the locals and their culture. It also facilitated learning Portuguese – not the easiest language … even though I am fluent in Spanish.

Excellent. We are good neighbours, as are they.

What’s not to like … except, perhaps, the lack of certain foods, ingredients, and restaurants. We live in what could be called a suburban community – ten minutes from the city centre, yet a world apart in many ways.

Missing family and friends. The divide as well as the divisions.

Timeliness. We rely on church bells, not tick-tocks or mobile devices, to tell the time.

Take it slow. Don’t be impatient. Perhaps, begin studying the language and culture of the country where you’ll be living. Be realistic. This isn’t the USA … but, then again, why would we move if we wanted the same cultural norms that caused us to leave in the first place?

I publish Portugal Living Magazine, the only multi-spectrum, English language magazine that covers all of Portugal … not just the Algarve and two major coastal cities. Along with the magazine itself, we’ve spun off a website, YouTube channel, Facebook Page, and other social media accounts. In my spare time, I serve as a pastor online to a progressive, nondenominational congregation that spans the globe. We enjoy spending time with our friends, eating out, taking day trips, and continuing our efforts to learn the language.