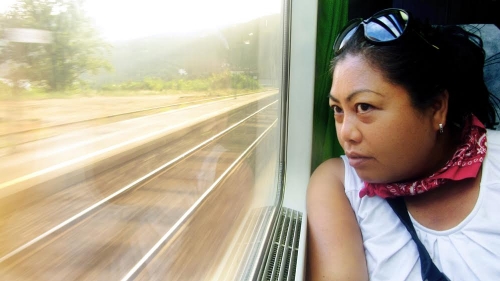 My name is Gail Aguiar, I’m a Gen-X Canadian who’s moved around a lot. I’ve lived in half of Canada’s provinces, and a bunch of countries. I hate moving (the un/packing), but I love exploring.Where, when and why did you move abroad?

I was a first-time tourist to Portugal in 2011, a birthday trip. It’s a tradition for me to travel solo to a new country every year for my birthday. I use hospitality exchanges wherever possible, and on that trip I was hosted by my now-partner, but we didn’t become a couple until we travelled together in 2012. We got married on my next birthday, and I moved to Portugal a few months later, after I finished packing up my life in Toronto – a feat in itself.

From an outsider’s perspective, the economic arrows pointed to Canada rather than Portugal. But I don’t really operate that way. This is my fourth migration, and I’m in the tiny minority of expats who has never moved for work, study, or as a trailing spouse. I chose to move to Portugal because the country and the culture intrigued me from the first day I arrived in 2011, and for me that’s more of a motivating factor. It doesn’t mean life here is always easy – to the contrary! – but it will continue to hold interest. In Portugal I’m in a privileged situation where I can be a freelancer full-time (in Canada I was 50/50 self-/employed), so here I am.

There were many roadblocks, the biggest being the steaming pile of bureaucracy that is Portuguese marriage law. But I should mention the paperwork came from five countries; it would’ve been fairly straightforward had it been just between Canada and Portugal. There were more details than we could ever remember, so now it’s all written out in a post on my website for posterity and the benefit of any poor lost soul searching for this particular information.

There were other challenges, but the marriage paperwork was the one where I had the least control over the process and the outcome. You can throw money at most problems to make them go away, such as outsourcing tasks or purchasing conveniences, but when it comes to paperwork there’s no way around it – you really just have to suck it up and deal with it.

Yes, and the numbers are increasing. Portugal has been growing as a tourist and expat destination in the past few years, and the changes are visible.

I moved to Portugal to slow down from my previous life in Toronto, and that’s exactly what happened. I live like a retiree here compared to the pace I was clocking before. On the other hand, I’ve enjoyed opportunities that I didn’t have before, I travel far less expensively both domestically and abroad, and I don’t have to shovel snow ever again (at home, at least).

I generally enjoy figuring things out, but deciphering information on a constant basis can get tiresome and frustrating. Language learning is not fun for me. I’m always looking for ways to make it more fun, but so far I’ve not found any that stick. It’s slow going.

I moved from a young country full of immigrants from around the globe and an evolving national identity to an ancient country of longstanding traditions, nine centuries of history, and one major religion. Portugal isn’t completely homogenous, but there’s a pretty clear idea of what is Portuguese food, and what Easter and Christmas involves. In Canada, multiculturalism gives these things a plurality.

A good example of the difference is Portugal’s registry of approved baby names. Only babies with at least one foreign parent can have a name that diverges from that list. Even then, they still have to prove that the baby’s name is officially recognized by the parent’s country of origin. In contrast, it’s sort of “anything goes” in Canada’s most populous province, Ontario, which excludes only numbers and symbols in baby names (BC and Quebec are stricter).

When it comes to migration, it’s best to adopt a Buddhist philosophy, even if you have no plans to be one: accept that there is suffering in life, nothing is permanent, give up useless cravings, and live in the present. Oh, and be compassionate and practice good karma.

I’m not a Buddhist, but I find it amazing how well the Buddhist philosophy applies to the expat experience. (I’ll bet Buddha was an expat 2,500 years ago.)

My overarching goal since arriving centres around raising Portugal’s profile abroad, mostly through media. I’ve been to all 18 districts on the mainland plus Madeira and one Azorean island (there are nine), but there’s still PLENTY I haven’t seen yet. The country looks deceptively small on a map, but there’s a huge regional variety of landscapes and products and customs. I want to keep travelling around the country, photographing and writing about it.

I don’t know if mastery of the Portuguese language is possible in my lifetime, but that’s probably my most ambitious goal at this point.

You can keep up to date with Gail's adventures on her blog, Gail At Large.

Would you like to share your experience of life abroad with other readers? Fill in the questions here to be featured in an interview!