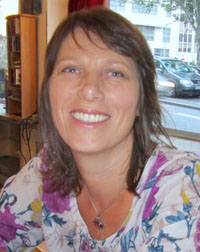 My name’s Julie and I’m a writer, a traveller and a teacher as well as being a serial expat. I’m originally from the UK but have lived abroad for over ten years now.

I had something of a mid-mid-life crisis in my late twenties which resulted in me trading the depressingly dull job I had in a bank in exchange for a backpack and a seemingly incurable dose of wanderlust. After 16 months of travelling, I came back to the UK and quickly realised that I didn’t want to live there for the rest of my life.

I had to find a way of sustaining a new life abroad so I set about getting myself a degree and training to teach English as a foreign language. I did the teacher training course in Barcelona in 2002, fell in love with the city and stayed there for two years. I’ve lived in several countries since then including Tanzania, Venezuela and now PortugalWhat challenges did you face during the move?

Shipping has been a nightmare each time I’ve done it – so much so, that if I had to move again, I’d be seriously tempted to leave everything behind and start from scratch! My possessions have been delayed, damaged and ‘lost’ several times, which adds to the stress of starting a new life and job in unfamiliar territory.

It’s always difficult to get officially settled in a new country, especially when you don’t speak the language or know the systems. I’ve had help from my employers with the bureaucracy of getting residence permits and so on but I’ve still had to organise utilities and doctors and the like, which can be a real headache.

Apart from my husband, who’s also English, I’m the only the foreigner in the village. We live in quite a rural area of central Portugal but there are expats scattered around the nearby towns and villages who tend to congregate at weekly markets or car boot sales to socialise and network.

Lots of things! I know everyone talks about the weather but it makes such a difference to my mood when I see blue skies and sunshine and that happens most days in Portugal.

I also enjoy not having to set an alarm clock to get up in the dark every day for work. My teaching schedule is mostly afternoons and evenings, which means I have plenty of time to do the things I want to do during daylight hours, such as establishing my freelance writing business or walking the dog.

I wrote an article about some of the other reasons why I particularly like living in Moura Morta. You can read it here if you like.

Christmas! We’ve just been going through the annual trauma of booking flights back to the UK to fulfil family obligations. All I really want to do is stay here and relax during my time off work, or go on a short holiday but it’s one of the few times when everyone is off work and school at the same time so we have to go back and try to fit everyone in. It’s great when we finally get there but I hate all the organising, not to mention expense, that’s involved. Bah humbug!

Clothes shopping is quite straightforward, except for underwear and shoes. I can never find my bra size here and I gave up asking for size 8 shoes a long time ago. The only place I’ve found them is Decathlon, which is fine for trainers and walking shoes but not for pretty leather ones. I always stock up in Clarks and Marks and Spencer’s when I’m back in the UK.

Whilst you can get all the basic foodstuffs in any supermarket, there is a distinct lack of variety when compared with the range of international foods available in the UK. Portuguese people like Portuguese food and that’s reflected in what you can buy in shops, especially away from major cities or expat enclaves. I’m not complaining too much but it would be nice to have a bit more choice.

I’m very happy living in Portugal and have no desire or intention to move back to the UK. I might consider a sabbatical in another country for a year or so but I consider this to be my home now.
I’ve been blogging about living and travelling in Portugal for over a year, which has given me an excuse to find out more about the culture and customs of the country and to find interesting places to visit. I thoroughly enjoy doing the research, travelling, photography and writing and will be building on this in the near future.

You can find my blog, Julie Dawn Fox in Portugal, at http://juliedawnfox.com. You can also follow me on Twitter @juliedawnfox and my Facebook page: Julie Dawn Fox.
If you’d like to contact me with any comments, suggestions or freelance writing proposals, here’s my email address: juliedawnfox@yahoo.co.uk