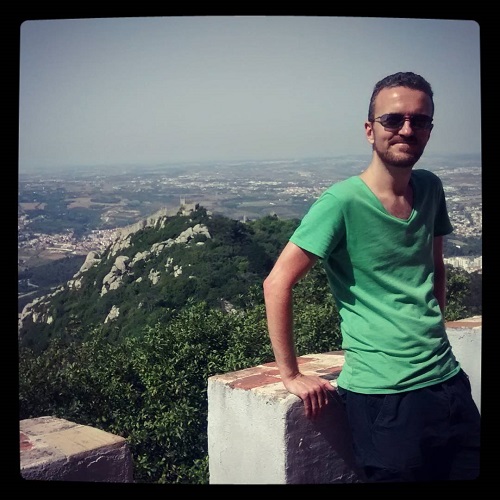 I’m a 36 year-old English language teacher, living and working in Lisbon, Portugal. I grew up in Surrey, in south-east England and lived in London, Birmingham and other UK cities before moving abroad.After university, not knowing what I wanted to do, at all, I started a career as a financial analyst, which went on for 9 years. I’d become quite seriously dissatisfied with life a long time before that, but it took me a long time to figure out what to do. Eventually, I was offered redundancy and took it. Then I qualified as an English language teacher and the rest is history. I’m also a part time writer, writing fiction as well as articles for online magazines, and of course my two blogs.

After qualifying to teach English, I still had five months to wait for my redundancy to actually happen. But when it did, I already had a teaching job abroad lined up. That was based in Çaliş in southern Turkey, not far from the tourist town of Fethiye. I finished my work as an analyst on the Friday, boxed up my life over the weekend (leaving it all in a kindly friend’s attic!) and took a Sunday evening flight to Dalaman. That was in May of 2011.

Well, the job in Turkey turned out to not be strictly legal. The school I worked for was tremendously well funded, with a state of the art campus etc, but they told us when we arrived that it was cheaper for them to bribe the police in the event of an inspection, rather than buy us all work visas. It was a shame, because it was a great place to live, with great people, incredible scenery and nature and I really enjoyed teaching there. Nevertheless, I stayed just three months, immediately looking for a way out and hence, ended up moving to Poland.

Lisbon, where I live now, is a thoroughly international city and people I know there tell me it’s always been that way, since the age of the discoveries, with people coming and going from the colonies, etc. I suspect that there are more expats there now than ever, though, as Lisbon has been featured as the new “place to be” in a lot of magazines, newspapers and lifestyle guides. I have friends from Brazil, Germany, Austria, the UK, Ireland, Cape Verde and various other places.

Lisbon has always been known as the city of light and being there, it’s easy to see why this is. But it’s more than that. You have the Tagus river, running out to the Atlantic Ocean, and that really defines the city in many ways, with so many people, myself included, living out their free days near the water. Apart from that, there’s the low cost and high quality of living, with cheap and excellent food and drink of all varieties readily available and the beauty of the city is something hard to describe. It’s run down and dirty in places, in the best possible way, though there is a general endeavour to clean it up. People are friendly, helpful and interested in an outsider’s experiences there, too.

The biggest thing for me is, naturally, the friends I left back home. I have a really close-knit social group and it’s difficult to not have that. They’ve been really good though, coming to visit me when possible and I return the favour when I can.

Perhaps the biggest problem I associate specifically with living in Lisbon is that everyone speaks English so well. It sounds like a strange problem but, in fact, it makes learning and practising Portuguese extremely difficult. I’ve spent some time in lessons, and I’ll be taking more this autumn, but it’s difficult to practise in real life situations when both you and the person you’re speaking to are so aware that their English is so much better than your Portuguese!

The biggest cultural differences are the pace of life – everyone is late in Portugal. It sounds like a cliché, but it’s a fact. Being on time is almost a pointless endeavour, in social situations, at least. I’ve learned to relax and taken that relaxed approach into other areas of life too, which has been extremely good for my mental health, in particular.

Another thing is the connection with family. I’m sure it’s not universal, but so many of the friends I’ve made in Portugal are really closely bonded to their families in ways that is much rarer at home. With my girlfriend, who is Portuguese, I’ve come to be a part of that and, for me, it’s a surprise.

Finally, there is the culture of enjoying oneself. In Portugal, it’s much more about food – which is a priority in so much of life and one that I can easily get on board with. If you ask your friends to come over, it’s never just for drinks. Always food. The same when you go out. Sure there are crazy parties that end at breakfast, but they always start with a dinner.

My first piece of advice would be to learn a bit of the language. Even if you’re not much of a linguist, just having a basic command will keep you out of trouble and make a favourable impression with a lot of people.

My second piece of advice would be to try not to stay within expat groups too much. I have some colleagues who seem to live in a parallel city to the one I occupy, as they only ever speak to other Brits, in some cases, only other teachers. It seems a shame to live somewhere and not get to know the people.

Finally, explore! Wherever you are, there is probably a lot to see and, in Portugal, Poland and Turkey, I’ve found some amazing places, often where expats never dare to tread.

Well, it’s all a bit sudden, but I’m actually getting married next year. I’ve met the girl of my dreams, as cliché as it might sound, and Lisbon resonates with me in so many ways. I’m also working at a really good school that offers me high standards, development within my career, but short enough hours that I can work on my writing and give it the time it needs. With the concerns thrown up by Brexit, I’ll be looking to try to get Portuguese citizenship in the coming years, but that was already part of the plan, as I’d already started planning my wedding when the out vote happened.

So hopefully, I’ll live out the rest of my days on the banks of the Tagus river, teaching and writing!

You can keep up to date with Kev's adventures on his blog, Um Lisboeta Inglés.