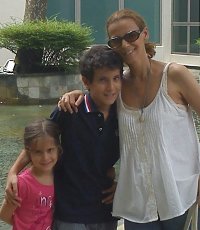 I’m a writer, university lecturer, and a mom. Spent childhood in Verona, studied philosophy at Vassar and got a PhD after my first son was born. I now live in Singapore with my husband Michele and two children Alexander and Eliot. I also write a blog called Diary of An Expat in Singapore.

I first moved abroad (to Dublin) because of my husband’s job. I was working as a producer for RAI television in Milan at the time but the commute was too long (especially when a few years later we had to move to Sydney). From there, it was Singapore – about 6 years ago.What challenges did you face during the move?

My biggest challenge was moving to Sydney with a two year old. It literally felt like the other side of the earth (from my hometown of Verona, Italy), after that, Singapore actually felt much closer. Of course, if you have children the most important thing is getting them settled into their schools and routines. Then, you can focus on yourself.

There are many expats in Singapore. The best part about living here are the many interesting people you get to meet. Unfortunatley, I don’t have much interaction with local Singaporeans because my children go to International Schools, however, lecturing at SMU was a great way to meet local college students and professors and garner their point of view.

Unlike most people who complain about the weather, I’ve grown to like it. I love the international feeling and exotic foods I get to eat here in Singapore. It’s a soft landing, everybody speaks English, and it’s a safe place to bring up your children.

What do I dislike? I sometimes miss the seasons, especially Autumn. See, my first contradiction. Expect contradictions from expats! Also, I wish there were more bookshops – I’m a veritable reading addict.

Biggest cultural difference is probably the feeling of being sheltered – one step removed from what’s really happening on the ground floor (politically and socially speaking). In a way, you feel like a guest and you don’t really need to get involved in the nitty gritty of how things are running.

I’m not a big shopper at all whereas here it is a national sport. Especially on the weekends. Groceries (the kind expats are looking for: wine, coffee, pasta) are all very expensive. On the positive side, you can buy an entire delicious meal at the local food court for the price of one coffee at Starbucks!

Mostly I cook Italian food at home so that hasn’t changed very much since you can get the same brands of pasta I used back in Verona here. Things like prosciutto and cheeses are very expensive though. And, the biggest difference, is going out for pizza here. In Italy, it’s something you do with your friends when you don’t want to spend a lot but here it’s like going out to a fine restaurant back home. You’ll get a shock when the bill first comes.

My advice would be to get housing and school costs, if at all possible, covered by the company moving you here. Pick housing that has good transportation options so you don’t need to get a car (which has an exorbitant tax). Taxis are very cheap here, anyway.

No current plans of moving for the future as we are very happy with our life in Singapore but as an expat…one never knows.

Jennifer Gargiulo's blog, Diary of An Expat in Singapore, features musings about the life in Singapore of an expat mom and writer from Verona, Italy. Humor included!