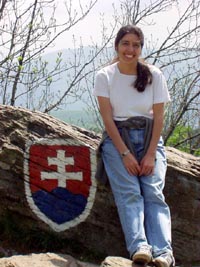 My name is Margarete Minar. I’m a native Californian who decided that I wanted to have a year abroad to experience life from a different part of the world, and to gain a new perspective on how things can be done differently. My year abroad turned out to be five years in total. I simply loved it and one year wasn’t enough.

I moved to Slovakia in central Europe in 1999 and stayed until 2005. I chose Slovakia because I had known some Slovak Americans (Americans of Slovak ancestry) in my home town and was somewhat familiar with the country. Also, I wanted to teach English and knew that my chances of finding work would probably be easier in “Eastern Europe” rather than in the west of Europe.What challenges did you face during the move?

I faced A LOT of challenges. First off, I didn’t know anyone when I arrived in Slovakia. My job as a teacher was secured before I moved and so I had to rely on the principal of the school to help me get settled. That was fine, but I didn’t speak a word of Slovak and was on my own quite a lot at first. Also, I moved to a small town where everybody could tell I was a foreigner and probably knew I was the new English teacher. It was pretty tough in the beginning, feeling alone and a bit intimidated by my new surroundings. After a few months I made good friends with several of my adult students and they helped me get acquainted with life in my small town and more comfortable with things.

For my first teaching job the living arrangements were already taken care of. I had an apartment that I shared with another teacher and it was very comfortable. When I moved to the capital, Bratislava, a year later, I was responsible for looking for my own place. I looked at real estate sites on the Internet and found something very decent. I decided I would pay a bit more and live in the city rather than on the outskirts, and I’m glad I did. I traveled a lot to different places to teach and it was good that I was centrally located.

Not really. Bratislava isn’t that popular of a destination compared to Prague or Budapest. At first I was a little dismayed that there isn’t a large expat population in Bratislava, but soon after I was really glad. It’s so important to be around the local people, to hang out with them, and to make good friends who are natives. You gain so much insight into the country and the people that you wouldn’t otherwise get if you only surrounded yourself with “your own” people.

Great! I taught English at several large companies around Bratislava and made some very good friendships that I still maintain to this day. And since I travel back to Slovakia at least once, if not twice a year, I have lots of people to visit with when I return.

What did you like about life when you were there?

Slovakia is a small country. It has 5.2 million people and is land locked by 5 other countries. I love that being in Slovakia and central Europe you really are aware of other people and other cultures and countries around you. Also, outside of the capital, I really loved the small town lifestyle. I loved that I could walk across my entire Slovak town in 20 minutes and walk to everyplace I wanted to go. And though I was always cautious, I never worried about violent crime as I had in other places. It was very liberating.

There are times when you can and will get lonely being outside of your country. You simply miss being home. Yes, you miss your family and friends, but you also miss hearing your native language spoken in the streets, being able to relax and watch a TV program in your own language, the weather, you name it.

Living abroad from your own country can be the best experience of your life. You gain so much knowledge and on so many levels; it’s amazing. Not only do you learn new things about the people and your adopted country, you learn about yourself, which can be just as important or even more so. It’s an amazing opportunity to become aware of who you are and discover for yourself the significance of where you come from.

Though I am back in California, I still really love Slovakia and want to help other foreigners learn about Slovak life and its people. I wrote a book called “The Foreigner’s Guide to Living in Slovakia” and also maintain a website called The Foreigner’s Guide to Slovakia at www.fgslovakia.com that is a follow up to the book. I want to make available everything I learned about living in Slovakia to help others acclimate to life there.

I am married to a Slovak and we often travel back. This is great because it allows me to maintain my close relationships with good friends and with my in-laws. I’m always learning something new about Slovakia and Slovak life. I hope I never lose interest.