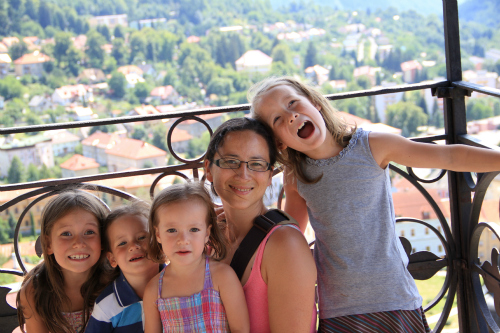 My name is Naomi, I’m from a small mountain village in British Columbia, Canada. I’ve lived in Slovakia for 10 years with my husband and (now) four children.

My husband and I met going to college in the USA. I finished my last semester of college in Austria on a study abroad program and then came to Slovakia in 2004.We were engaged at the time and he wanted me to experience Slovakia before we got married, to have a better understanding of where he was coming from.

I think one of the hardest things was loneliness. My then-fiance was working in Austria and I was alone in Bratislava, teaching English. When teaching I would go out to businesses so it’s not like I had a place of work where everyone convened. The owner of the company did a good job of trying to create a community for the teachers, but I was often gone on the weekends and so didn’t really get to know many people.

There are quite a few in Bratislava, but now that I live in a small town an hour away, there are only a few.

As a parent, I appreciate that there is still some freedom for kids – people aren’t expecting a predator around every corner (or in a friend, for that matter). A friend was visiting from DC and was floored that so many kids were playing outside unsupervised, though we are in a small town.

It’s really hard to get to know people. Slovaks, at least in the West where I live, are quite reserved although they will do anything for you once you get to know them.

Don’t be afraid to approach a stranger and introduce yourself, even if you feel like an idiot, because nobody will approach you. I’m terrible at following my own advice, by the way.

Also, keep an open mind that sometimes things are done differently or thought about differently, and that’s ok.

The future is an open door 🙂

You can keep up to date with Naomi's adventures on her blog, Almost Bananas.