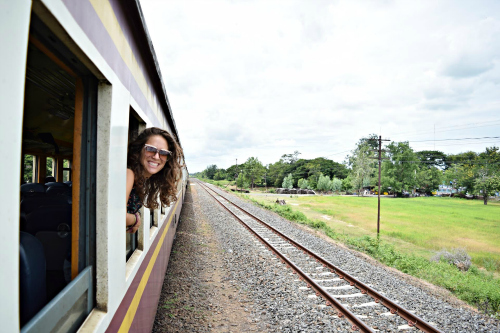 My name is Laura. I’m a blogger over at Collecting Labels and I’m originally from New York.

I moved abroad just over five years ago. I graduated from college and wanted to spend a year traveling. My boyfriend and I started in New Zealand and accidentally stayed there for a whole year.We spent two years there then moved to South Korea for a year. Now we’re splitting our time between his home country -the UK, mine – the US, and the rest of Europe looking for a new place to call home.

I think because I didn’t realize it was going to be “a move”, that I didn’t worry too much about it. I simply thought I’d be traveling for a year and the thought of picking up and moving didn’t even occur to me until we did it in Australia.

In every country I’ve lived there have been so many expats. Some from the US, but many from all over the world. It’s one of my favorite things about living in a different country, you open yourself up to a totally different community of people than if you just stayed at home.

What do you like about life in South Korea?

There is a lot to like – getting to know a new culture, a new language. I love meeting people from all over the world and learning about their country and hearing their stories. That’s probably my favorite part.

The worst thing about living abroad is being far away from family and friends. I have new nieces and nephews that have been born since I’ve been away. They are growing up and they hardly know who I am. My parents are getting older, friends are getting married, people’s lives are carrying on and I’m not there for a lot of it.

What is the biggest cultural difference you have experienced between the various countries you've lived in and life back home?

I think Korea was the biggest adjustment for me. I had to learn a totally new language and the culture really was completely different. People don’t speak out about things when they are unhappy. I found that really difficult both in the workplace and my social life. It’s viewed as being aggressive and is really frowned upon. I found the hierarchy in the workplace a really difficult thing too.

Just do it. Get out of your comfort zone. You will grow in so many ways. It’s an experience that I love so much, I simply keep reliving it.

In the next few months I’ll be exploring Europe. I’ve got plans to spend a month in Denmark and after that my plans are wide open. My boyfriend and I are hoping to look for a new place to call home in the second half of the year – we’re open to suggestions!

You can keep up to date with Laura's travels and adventures on her blog, CollectingLabels.