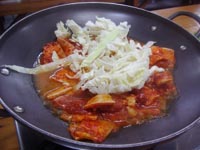 South Korean food may be an acquired taste, but once you get used to it, it can be pretty addictive. The food here displays definite influences of Chinese and Japanese cuisines, but it still retains its unique flavor palette of spice and garlic combined with mild flavored ingredients such as raw fish.

Some amount of culture shock is almost inevitable, so the best thing to do is embrace the change and try to get accustomed to the new foods and beverages to ease your transition. South Korean fare generally has few bread and white flour products, and instead, rice and dishes with strong spices are common. Traditional Korean foods are low in fat but high in salt, so if you are on a low-sodium diet, you need to keep an eye on your salt intake.Dining out can be quite cheap, as food and booze are not very expensive across the country.

A South Korean meal centers around soup and rice, which are served along with several side dishes. Typical side dishes include bean sprouts, sautéed fishcake and pickled cucumbers. These are the top 3 specialties in South Korea.

1. Kimchi: This is the Korean national dish, and is generally made from fermented cabbage and chili. There are countless varieties of kimchi, as it can be made from just about any vegetable that can be pickled. Some kimchi recipes call for scallions, cucumber or radish instead of cabbage. The dish is low in calories and high in dietary fiber, and is almost always sour and very spicy – with the exception of white kimchi, which is seasoned without chili pepper. Kimchi frittatas, kimchi pancakes and kimchi pizza are just a few of the new fusion dishes that have become very popular in South Korea.

2. Bulgogi: This Korean dish consists of grilled marinated beef and it has been listed as one of the World’s 50 most delicious foods. A charcoal brazier is placed in the center of the table and patrons cook their choice of cuts of marinated meat – generally sirloin cuts of beef, though chicken and pork may also be used. Once the meat is cooked, it is placed on a lettuce leaf along with other greens and sauces which is left to the taste and discretion of the customer. It is considered an affectionate gesture to make a small lettuce wrap morsel and feed it to a close friend or relative. When used in the context of dating, this gesture is used to display a definite interest in the other person. When placing your order, keep in mind that the “b” in the word Bulgogi is pronounced as a “p”.

3. Bibimbap: this is a simple but delicious dish when cooked correctly. The dish is served as a bowl of cooked rice topped with an assortment of vegetables, chili peppers, shredded meat, and an egg, along with chili sauce on the side. You need to add the chili sauce according to your preferences mixing it in with the rice and assorted condiments.

While chopsticks are common in Asia, Koreans are the only ones that prefer stainless steel chopsticks to wood or plastic ones. It is not easy to eat with these chopsticks as they are smooth and provide little or no traction. As a result, you will probably spend a significant portion of your meal fumbling nervously to keep your errant chopsticks in place! If you are part of a large group, each person will be served an individual serving of soup and rice but it is customary to share communal dishes.

It is considered improper to leave your chopsticks sticking into a dish. Avoid eating rice with chopsticks as this can be considered to be rude; instead, use a spoon. Additionally, you should not leave a spoon downright in a rice bowl.

When you are out drinking, you should not fill your own glass; instead, fill the glasses of those around you, and they will do the same for you. Do not fill a glass until it is empty, and remember that it is considered polite to use both hands when you pour a drink for another person. When drinking, you should turn your head away from a senior person. It is impolite to refuse a drink handed to you by an older person.

Koreans are among the heaviest drinkers in the world, so it is not surprising that booze is cheap! The national drink of South Korea is soju, which has an alcohol percentage of 20 and is best described as a vodka-like alcoholic beverage. At about W900, it is the cheapest alcoholic drink in South Korea.

Western-style lagers are quite popular here, and cost about W1500 per bottle at the convenience store. The “hof” is the Korean version of the beer pub, and a pint of beer here would set you back by W2000 or more. You are expected to order food along with your drink, and if you fail to do so, you may be served a small meal even if you didn’t order it. This would typically cost you another W10000 or so.