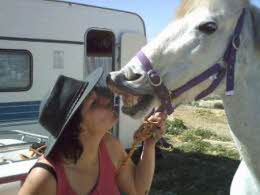 We lived in South Lincolnshire prior to our move to Spain, where we bred Pygmy goats. We had the largest breeding herd in the UK, and it was the building up of that over 6 years that gave us the income to sell up and move to Spain. We live in a little village, Fuente Vera, which is approximately 16kms from the beautiful whitewashed village of Castril de la Pena, in the Granada region of Andalucia.

We moved here in February 2005, after selling our smallholding in the UK. My husband Alan has osteo arthritis in his lower spine, and as a degenerative condition we were aware that it will not improve, but we thought that moving to a warmer drier climate, it would help. We came over on a 12 day holiday during the summer of 2004, having never been to Spain before. After spending the whole 12 days driving around, Alan was amazed that he was relatively pain free. In the UK we could hardly drive two hours away to visit family without him being unable to stand or straighten up for some time after the journey. His treatment consisted of 3 monthly epidural injections for the pain, plus increasing amounts of strong medication which left him at times almost like a junkie!On our return to the UK, we made the immediate decision to sell up and move, lock stock and barrel to Spain – we have always been impulsive! So, the farm went on the market, the herd was sold as a going concern and the rest of our domestic animals were homed to friends and family. The property sold in November 2004 and by the end of January, the sale was completed. We spent a few days then visiting family and Friends saying our goodbyes, and we set off on our journey.* We brought our 2 Shetland ponies with us and traveled over with them in a horse box with some of our personal possessions – everything else was put into storage.

We knew that we would have to work at something in Spain as we couldn’t live off the proceeds of the house sale forever. Alan’s passion has always been horses, and we thought we had found a gap in the market for adventurous horse riding for experienced riders, rather than trekking. With Alan anticipating a vast improvement in his health on arrival in Spain, this is what we decided to do after researching the web for information on setting up a business in Spain.

When we arrived in Andalusia, we had rented a property which had a small amount of land for the 2 ponies. We decided that having the money in the bank from the sale of the house would give us the advantage of being able to buy the property immediately if we saw what we wanted and which met all of our requirements.

During the wait for the sale of our UK property we had done our homework with extensive research into the process of buying in Spain.

We met with a couple of agents, and then the third one actually showed us the property we now live in. We had put enough money aside to be able to live for about 2 years, which is the time scale we had worked around, allowing us to find and buy a property, complete any works that would need doing to accommodate guests etc.

The agent showed us around all sorts of property, none of which was suitable, and we were becoming quite annoyed that he hadn’t listened to our requirements. Then at the last minute he said he thought we might have one which would suit – and it did! Immediately we saw the open land and terrain surrounding the property we fell in love with it. There are views across from us directly into the Cazorla mountains, with the Castril Valley and Rio Castril directly below us.The property itself is situated on a plateau, and although we are at the same height as Mt Snowdon in Wales, it doesn’t feel like we are so high.

Trying not to get too carried away and let our hearts rule our heads, we looked at the rest of the property, and made the decision there and then to buy. – I did say we are impulsive. However we are not stupid, and there is a difference.

Unfortunately when we arrived, he couldn’t ‘find’ the paperwork but said he would have it in a day or two. so we told him to call us when he had it, and although he tried to persuade us to part with the deposit, we refused, knowing that it can be difficult to get it back in the event of a non sale. He became quite irate with us, but as we explained to him, we would have done the same with any agent – it wasn’t personal. After all we had only known the man for a few hours.

Eventually three days later, he called and we went back to inspect the paperwork, only to find it had all been dated for the day before!

Always, always check all the details. Take nothing at face value and don’t part with your money until you are sure you are getting what you expect.

The market here like most of Spain at the moment is very slow, although we have heard of a few sales in the area in the last month. A lot of ex pats have gone ‘home’ to the UK after finding that their rentals are not doing well enough to secure them an income.

Self employed, running our horse riding and family holidays.

During the summer months, we are booked up with families as we have a small pool as well as a large 8 person cave home. During the autumn, winter and spring, we are booked up with horse riders as the weather is so clement. So I suppose in a way we have an all year round income. We get a lot of repeat bookings particularly for the horse riding, which has been great for our business. No matter how lttle money we have coming in, the 8 horses still have to be fed!

This year has been quite difficult with the recession hitting our potential guests, but we are now booking up for 2010, so hopefully we have managed to ride it out and things will pick up early next year. My background is in sales & marketing so we had an idea about how to handle the advertising etc.

The actual setting up of the business was very quick and relatively easy. We met with the local Mayor who was happy to help us with anything. He is very keen on promoting tourism to the area, and has won several awards for it. The paperwork regarding the keeping of the animals was quite straight forward, and we were used to all of the red tape with dealing with it in the UK.

Unfortunately yes! The number is growing quite rapidly, and they are building their own little cliques, which we hate!

Brilliant! We were the first Brits into the village and were naturally apprehensive. The population is only about 300 and the majority are elderly, with all of the youngsters going further afield to find work.

However we have been made so welcome and have even been ‘adopted’ by one family! We feel that if we needed help with anything we could just ask, and it would be there.

Everything! There is nothing we don’t like and wild horses (excuse the pun!) would not drag us back to the UK. We consider this to be our home now, and feel really settled here – in fact we felt like that from the start.

We had moved around so much in the UK. Alan is ex British Army, and has always had itchy feet and never really settled since coming out of the Army – but this is home to us both now. Alan has developed a heart problem, and needed to have a triple heart bypass. Our son asked us if we were going back the UK to have it done. We said definitely not! this is our home now.

Even the language has never been a barrier for us, even though when we first came here, we knew very little Spanish. But in the four and a half years we have been here, we have never needed to use a translator, even in the hospitals. If this is going to be your home, you have to learn the language.

Absolutely nothing – except maybe some other expats who give us a bad name!

When buying a property or business, make sure that all the paperwork is in order – trust no-one!

We know that sooner or later this lifestyle will become too much for both of us but not for sometime yet. In that event we will sell up, but a couple of smaller properties and rent them out.

Then we shall simply live out the rest of our lives here in our little bit of Spanish heaven!