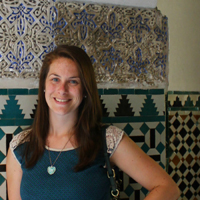 My name is Cat Gaa, and I’m a Chicagoan who moved to Seville, Spain. I’m a Jill-of-all-Trades: I teach, I write, I translate and I’m working on setting up a business!

I finished university in 2007 and wanted to move abroad for a year to improve my Spanish and travel. I had previously studied abroad, but didn’t get everything out of it that I wanted. I applied to a work exchange program for teachers and was placed in a school 15 kilometers west of Seville. I’ve been living and working here since.What challenges did you face during the move?

My first year in Spain was a mix of major highs and deep lows. The added barriers of the language, moving alone, starting a new job in addition to leaving my friends and family and a job offer behind sometimes seemed really overwhelming. I was determined to stick it out for at least one year and met my goal of traveling and learning Spanish.

Meeting my boyfriend right away helped a lot, as he could assist me in the language bungles, and he invited me into his group of friends and family right away. In a closed society like Seville, it helped to have someone who showed me how to act, what to do and how to survive. He’s been extremely patient with me as I’ve learned to speak Spanish and learned to make my own life here, and being in a bilingual, bicultural language is a daily challenge with heaps of benefits.

Originally, I rented an apartment with a Spanish girl and a British girl who was also teaching. I did a lot of research on bus lines to my job, average rents, amenities and such online, and I made a decision based on my gut. I wouldn’t recommend sending money before seeing a flat and meeting roommates, though!

Spanish apartments rarely have a lot of amenities I was used to having back home – washing machines, ovens, clothes dryers, a hot water heater. Now that I can afford to, I have all of those things!

My partner and I have been living together in an apartment he bought outside of the city center for nearly four years, and we’re now looking for a bigger flat so that we can start a family.

Spain has long has a huge draw for expats, and Seville is beginning to have a larger population. There are many Anglos (particularly American), Moroccans and Northern Europeans, but nothing compared to the coasts.

Sevillanos typically have the same group of friends since they’re small, and it’s often hard to break into the social circles. Meeting my boyfriend certainly helped, and he’s introduced me to many friends (and taught me Spanish!). I’m a very open and outgoing person, so I rarely have problems these days!

My closest friends here are other Americans, and for me, having someone to gripe with about Spain is essential.

I love that I feel challenged daily, and I love that my city still surprises me. Seville is beautiful, historical and exciting still.

Apart from missing my family and friends, I miss not having a dog (but travel a lot and couldn’t have one), and I sometimes feel like I am very limited with what I can do, work-wise.

Even though Spain is a Western, modern country, there are tons of idiosyncrasies in daily life. Nothing sticks out in my mind as an enormous cultural difference anymore, but I think that everything now is just life as normal.

I do complain every Sunday that no shops are open!

I live next to one of the largest supermarkets in Seville, so I have everything in one place. I do miss the romanticism of having to get different food products from different shops, of having a grocer and a butcher and a fishmonger, but am so busy these days!

Spaniards love food and drink, so I’m spoiled. I like nearly everything that’s served to me and go out for tapas often. My biggest dislike? The copious amounts of mayonnaise that comes served with everything!

And then, just go.

Spain is my future, and I finally have that clear. We’re talking marriage, kids, new house (but in Spanish). I’m also starting my own relocation firm for North Americans, COMO Consulting Spain, in addition to blogging and writing more.