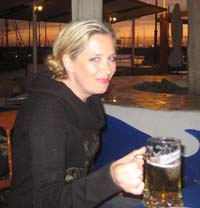 My name is Elle Draper, and I live in a little converted farmhouse on the side of a valley in Almeria, in Andalucia – Southern Spain. I live here with my partner, Alan, and our three very enthusiastic rescue dogs These are Guido (Chief of Security / G Unit), a Beagador. Pepper (Big Face / Big Black Bear), a Labrador, and Billy (Billster / Ginger / Benjamin Button), a boxer.

Originally I hail from Southsea, Hampshire although I was actually born in York. Together with Alan, I provide web design, online marketing and search engine optimisation services (getting sites to number one in Google for example).We have clients all over, including the UK, Spain, Canaries, France, Germany, the US, and even Australia. However we also have a number of our own websites… mainly with a Spain focus. Our most recent is www.spainbuddy.com which publishes daily articles about anything Spanish… food… photographs… tips… local events… and much more.

We originally moved in the summer of 2006. Alan and I had met in Portsmouth, through work – and both expressed a desire for warmer climes. We considered Italy and the Canary Islands, eventually deciding on the Canaries. We lived in Lanzarote in the Canary Islands for 6 years before moving to Andalucia in September 2012. The resort we lived in on Lanzarote (Playa Blanca) is a beautiful resort, and has oodles of restaurants and nice bars… as well as a stunning Marina. However, we had been hankering for a more rural existence for some time – and our current home in Almeria ticks all those boxes.

I have to say that we were really lucky as we didn’t experience many problems with the move. All our friends and family were extremely supportive… with a number of them being surprised it has taken us so long. The only issue, I suppose, was when our household belongings got stuck in Customs for 10 weeks because we used a terrible shipping company.

Oddly, our move from Lanzarote to Almeria was more traumatic. We travelled from Lanzarote to Cadiz by ferry – with the three dogs, and then drove across the width of Spain to get to the far right hand bottom corner. It was quite some journey, and not one we would wish to repeat.

Alan calls me the “Research Queen”. I rarely go anywhere without researching the area fully… so with it being a permanent move, my research skills went into overdrive. I started networking with people in Lanzarote almost immediately, using forums and local publications. There was no Facebook then, but MySpace was still the popular place to meet people online. We looked at hundreds of property websites and sent many enquiries. It surprised me how many of those enquiries went unanswered. However, one day I posted an announcement on a local forum and asked if anyone could recommend a long term rental property. Within minutes I had a private message from a lady in Playa Blanca, Lanzarote who knew of a property that would be perfect for us. We agreed to view it within a couple of days of landing on the Island. We viewed the villa in Playa Blanca when we arrived and fell in love with it. We did look at other areas of the Island, but I had my heart set on that little villa – so we returned for a second look two days later. Within the hour, our paperwork was signed and we were sat on our sunbaked terrace with our tootsies in the pool and a celebratory glass of wine in our hands.

When we decided to move to the Mainland, we thought it would take us a year or so to find somewhere we really liked. However – we both found the same property online ono the same day. It was meant to be… so this sped up our move quite rapidly. We moved within 6 weeks of having found our new home.

There are no expats in our little village – but the nearest town (Albox) has a large number of them. We have friends in the area, but we have steered clear of the Expat social scene to a large extent. Those that we have met with have been extremely welcoming, and there’s nothing I like more than meeting up with the ladies for some wine, tapas and girlie chats. I’d do it more often if I could shoehorn myself away from my desk. I am a workaholic so sometimes Alan has to throw me out of the door to go and have a life outside of the internet.

We get on very well with our neighbours. The limited Spanish that we had in Lanzarote was a little accented… so we’ve struggled a bit with getting to grips with the Andaluz twang. It is like we moved from Glasgow to Cornwall without learning the Queen’s English on our way. But it gets easier the more we practise, and our neighbours are extremely helpful and patient with us. I know the words, but stringing them together gives me some issues at times.

Our views are so pretty, and we love the rural life. Playa We are currently in Almond Blossom season, and soon the other colourful flowers will be blooming and covered our little patch of hillside. The clear starry skies with no light pollution give us some amazing sights. It is blissfully quiet – and all we ever really hear from our home is the sound of chickens and faraway dogs.

The only thing I ever struggle with, is other Expats. There is a nasty BNP element around. They seem to think that Britain is still an empire. They love the sound of their own voice – and like to use it at full volume. We have been horrified to hear some British people being very rude about (and to) our gracious hosts. The only times we have ever been let down by people, has been by other Brits.

Culture – not so much… we’re still in Europe. But I guess the language is obviously different… and the paperwork trail is a nightmare. 17 pieces of paper to achieve something simple. I am exaggerating the number of pieces of paper of course – but it feels that way at times. It is also very difficult to start /maintain a business here. The costs can make it very difficult at first, as they can be so high. It is more than €250 for social security, before you even think of the tax. That is regardless of how much you earn – and is the reason that many people (including the Spanish) work off the cards.

I find it difficult to remember what life was like back in the UK as it was so long ago. I remember the rain, the commute, the cold, and the stress. I have been back just 3 times since we left – and never stay for long. I am always keen to get home to the sun, to Alan, to the dogs, and to work.

In Lanzarote, clothes shopping was expensive, and when we first arrived… food variety wasn’t as vast (or as cheap) as we were used to. However, that has improved a lot since 2006. Here on the Mainland I have to say that the food variety is fantastic… prices are great… and we love the local markets for all our fresh produce – the quality is so much better than we were used to, and a fraction of the price. Also, any online shopping is now a breeze… as most of the retailers ship to Spain without any issues. We don’t get post in our little village – but we pay for a post-box in the nearest town so it isn’t a problem.

I love the food here. I love using fresh ingredients, and the quality is great too. I really enjoy cooking… which I never really explored until we left the UK. Unfortunately Alan prefers more “traditional” fayre, so I have to allow him the occasional pie and mash :o)

– Research research research.
– Rent before you buy a home – a place is very different to live in than it is to visit for a two week holiday.
– Don’t trust someone just because they speak the same language as you. Keep your cards very close to your chest. People seem to leave a lot of their commonsense on the plane and can get burned.
– Make sure that you have a good internet connection so that you can keep in touch with friends and family from your former home.
– And last, but certainly not least, learn the lingo! Even if you are not fluent… being able to hold a basic conversation will help you settle in much faster… and, let’s face it, it’s only polite!

Who knows what the future can bring? Right now we are happy ticking along. Eventually we would like to buy a property to retire in, but we haven’t seen our forever home just yet. We also want to do a bit more travelling before we settle down permanently. Oh yes – and I do want a donkey when we buy a house with more land… I’d call it Derek, or Deirdre if it’s female of course. We’ll probably get Derek a friend too… perhaps a goat, called Gordon. Or a pig… called Peter. Ducks… I like ducks… and maybe we’ll get some chickens too… and… and… and…

Elle may be contacted either by: