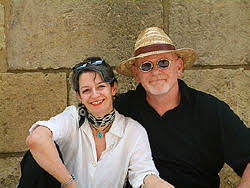 I am Fred Shively – freelance creative director, writer, photographer. Arpi Shively – professional writer. We moved to Spain in 2003 from the USA to the Alpujarras in Andalucia because we wanted to get back to Europe.

Being an American citizen made it slightly more difficult until we found out that, because I was married to a British national, I could come in as ‘familial’. Otherwise the usual stuff: language, bringing a car into Spain (particularly difficult and expensive from the USA), the culture shock (compounded by moving to a small Andalucian pueblo).

We rent, always will as it obviates a whole load of problems. We have neither the need nor compulsion to own. Also, we’re about to take over the management of a totally delightful Finca and casitas which we could never have done had we been tied to a property.What is the property market like at the moment?

As far as we can make out: dire. Although probably a good time for buyers.

Both my wife and I are freelance. We used to do a lot of articles together for various Spain-centric magazines – most of which have ceased to exist. Aside from photography, I occasionally act as a creative consultant for events, seminars, etc. mostly outside Spain. From May, I’ll be offering photo-treks in Andalucia. My wife is a Lonely Planet author having written the Andalucia section of the latest Spain guide. But her main stock-in-trade is marketing/branding strategy and copywriting for clients mainly abroad. Further details about Arpi can be found at her website here.

Quite a few although, relative to coastal areas, not a huge number (we live in the foothills of the Sierra Nevada).

Clean air, stunning surroundings, the people (both indigenous and expat), the location (between Granada and the coast and within easy reach of both), pace of life.

Very little to the point of insignificance.

Visit first, rent second, buy last (if at all), have enough income/savings to at least live modestly, try to learn the language (a little goes a long way), do not try to impose your culture.

Whatever fate has in store – it’s been an interesting trip so far!