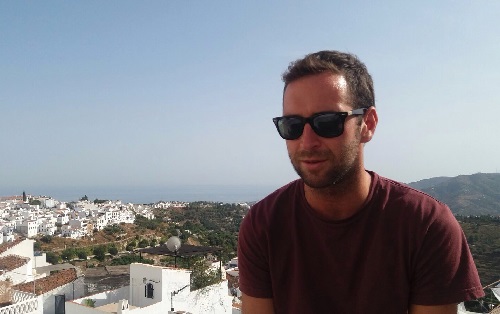 I am Gavin, a 28 year old from Newcastle, who teaches English in Spain and writes occasional blog posts about my adventures along the way.

I originally moved to Australia in 2011 and lived there for almost three years.After some travelling I then moved to Spain in 2015 as I wanted to teach English abroad but also to live in a country with reasonable access to the UK. Developing my Spanish skills was also part of the appeal.

During the move – securing reliable employment before arrival. It’s very much a lucky dip when you do Skype interviews in the teaching English industry.

In our first year here our employer helped us find somewhere, although the poor location of it was one factor that led to us seeking to move within Spain – from Bilbao to Malaga. In Malaga we used idealista and Facebook groups aimed at expats or related to rentals.

Where we live in Huelin, Malaga there aren’t a lot of people from the UK but in Malaga city I have developed friendships with expats through my jobs and also through playing sports.

Similar to that of my relationship with expats, I have socialised with locals and play sports with them. Generally speaking if I go on a ´night out´ it tends to be with expats or native speakers although sometimes it could be a mixed group.

Funnily enough I’ve just written a blog on the positives of living abroad, subjective to Malaga. First and foremost of course are the weather and the beaches. I live 4 minutes’ walk from a beach! I also like the fact that I am immersed in a Spanish community, but that I still have access to international movies in the cinemas/products in shops. Malaga is a European city, so whilst I still feel it is fully Spanish, it definitely caters to its international visitors and expats too.

The most obvious is being away from family, particularly my young nephew. The flipside is that time spent with family and friends during visits is generally quality time.

Another thing that is famously difficult is anything to do with paperwork in Spain – it can be frustrating. Another factor that stems from not being fluent in Spanish, is that things like going to the bank to query a charge become all the more daunting.

Mostly things that stem from the climate. Outdoor eating and a more cafe-style drinking culture, with children staying out very late, very often. The opportunity to play sports/go to the beach as a social event no matter the time or the season really – it presents a lot of options, particularly for young people.

My dislike is more towards the pride that Spanish people often have in their food when accompanied by a stereotypical opinion of British food. I like ham sandwiches, camperos and tortillas as much as anyone really, but they aren’t massively unique cuisine. That said, the shared-dish style of eating here is both very sociable and healthy and makes meal times more enjoyable than they are at home. Fresh fruit, and seasonal, is great as I suppose is fresh fish although I don’t like fish personally. Alcohol is very cheap generally, and not because it is bad quality!

Have an idea of what you want from where you live in terms of location/amenities and the apartment itself. Use this as a checklist, and research on Facebook groups etc for schools/neighbourhoods etc. Places can look very close to the sea on a map and in reality be a bus journey away. Be flexible and adaptable as not everything will go to plan. If learning the language is a top priority, live with people who speak a different language to you!

At least one more year in Malaga, and hopefully get headhunted for my blog! Failing that, perhaps return home to study further and open options up for the future – Malaga or home (or Ireland!)

You can keep up to date with Gavin's adventures on his blog, Geordie Unsure.