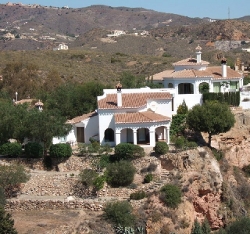 We are the Bowlings, John, Joyce, and the dogs. We always planned to retire early, sell up our house in Barnsley Yorkshire, build a house in Spain and move permanently to Spain to become Residents. We wanted the better climate, the outdoor living, the lower cost of living and all things Spanish.

We never wore “Rose tinted Glasses”. We did all the necessary research- Property shows, exploratory visits to Spain, finding reputable agents etc. We read “You and the Law in Spain” by Searle from front to back and understood the risks. We found a reputable Spanish qualified lawyer who spoke English who was not connected to the local scene and who was a Member of the Notaries Society. We felt nothing was left to chance.Our Story

Eventually we found an excellent building plot, urban land, at the edge of the quiet village of El Pinar near Bedar in Almeria. The plot was too big for us, but our best friends were looking for a holiday home so we all decided to build two houses on the plot. We made an offer subject to Planning Permission, and this was accepted. We found an Architect who produced excellent plans for the two houses and later agreed the building costs with a good local builder.

All was set for the purchase of the plot to proceed when we got the first indications of difficulties. The Mayor in Bedar hinted that there were problems. A mistake had been made at the Town Hall with boundaries, and most of our plot had been included in a Plan Parcial. We informed the Vendor, and after threats of legal action a contract was drawn up between the Town Hall, the Developer and the Vendor which removed our plot from the Plan Parcial, and allowed us to build. With the benefit of hindsight we should have walked away, but by then you are in love with the plot, the dream house, and as well, money has been spent. We believed the Mayor who said everything was legally correct.

We completed the purchase and began to build, waiting for the Town Hall to issue the Building Licence. This was never issued. The Architect who knew far more than he admitted kept away and the build was supervised by his Surveyor.

Work stopped shortly after, when a neighbour denounced the development as “Illegal”. Following further meetings at the Town Hall (who were reminded of the Legal Contract above) work was allowed to proceed until fully completed. No objections were made by the Town Hall over connection to Sevillanas (electric) supply. However no Certificate of New Works or Certificate of First Occupation were ever issued.

Several years passed, and we then received a letter from a Lawyer in Vera representing a Developer called Landsur. When we met him he informed us that all our land was still within their Plan Parcial, which had now been formally approved by the Town Hall in Bedar, and we would be forced to contribute 51% of our land to the Developer and contribute a proportion of the Infrastructure Costs for the Plan (£40,000?).To make matters worse, the Town Hall had altered, without notification or consultation, all the boundaries on our side of the village to accomodate development on the other side. As a result, land on which several houses had been built, including our own, had been retrospectively reclassified from “Urban” to “Rustic” and we were now outside the original urbanization and easy prey for the Developer of the Plan Parcial.

From then on we have fought a prolonged and vigorous campaign against the Plan Parcial, lobbying MP’s, MEP’s, writing to all and sundry including the King of Spain and making an application to El Defensor del Pueblo.

Needless to say we are also fighting this in the Courts and at present we have two cases running, one in Almeria and one in Granada. These are aimed to have the Plan Parcial declared null and void on the grounds that, firstly the approval of the Plan has not followed the prescribed legal basis, and that the proposed development severely affects a large area of land of “ Special Scientific Interest” , that is a Conservation Area. This has not been easy to achieve as it is clear that most of the local lawyers have severe conflicts of interest, as they do work for the developers and rely on good relations with the Town Hall. They are not prepared to rock the boat, or in certain cases do anything at all for the money.

It is difficult to put into words the nightmare we have experienced- the roller coaster ride of emotions as hopes are raised then dashed; the sleepless nights; the endless fruitless meetings with the Developer reaching yet another deal satisfactory to both parties, only for that deal to be forgotten; the promises made by the Mayor (at Election time) only to be broken when he was re-elected. The list is endless, the stress awful, the effect on relationships readily apparent.

At this time we are in remission, but the problems are not resolved. Thanks to our latest and greatest Lawyer we have managed to legalise the houses and pay, retrospectively, the building Licence, so at least the houses are safe. The developer has not gone away, merely adopting a low profile as the Town Hall has decreed that the matter is on hold pending legal clarification. If we wanted to sell, which we don’t, we would have great difficulty unless we can win the Court Cases. Our quiet village is back with us, after a long period of total uproar when hectare after hectare of beautiful hillside was torn apart by rockpickers and bulldozers, as another Developer installed miles of infrastructure that will never be utilised, as the property market in the village is moribund and is likely to remain so.

As a result of our problems we have become politically active with involvement with Levante Sostenible, AULAN, AVEP and other pressure groups. We hope that we can help to make things better for the hundreds of people in the area who have similar or worse problems than us. Only when the Spanish Authorities sort out the awful mess they have created will potential house buyers begin to visit Spain again, and perhaps then the Economy will start to recover.

Are we glad we decided to come to Spain? As with most things in life…yes and no. We have a beautiful house in a superb location; we love the climate (although it’s definitely changing for the worse); we still love all things Spanish, particularly Real Madrid; our relationship with our best friends has survived, and through our political activities we have met many other like minded people many of whom have become friends. On the down side, the financial position has not been as we expected, with high inflation coupled with the weak pound affecting our income which is paid in Sterling. We hate the Spanish bureaucracy, the lies, the lack of principle of politicians, civil servants, and some lawyers, that has caused, and continues to cause, great distress to hundreds of families that have bought legitimate properties in good faith, only to be sold down the river by their elected and legal representatives.

Do we have advice to anyone thinking of coming to Spain to purchase property and live here? Don’t do it now! Who knows what you are buying and what it is worth. Do it when the Government has cleared up the awful mess it has helped to create, and when it is clear what the Banks and Cajas are going to do with the thousand upon thousand of properties they own, which are overhanging the market.

We intend to stay where we are until old age prevents us from keeping the houses and extensive gardens up to scratch. What then? We will have to see then!