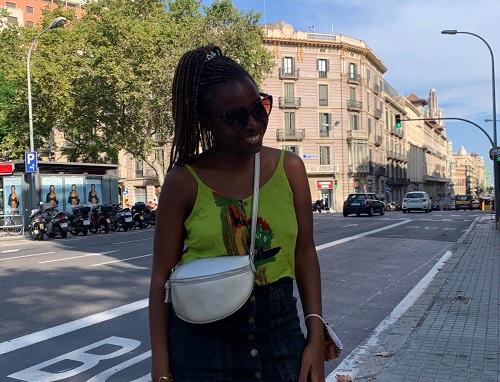 I am Laetitia. I am French-Cameroonian, and I’ve been living in Spain for nearly three years now. Before that, I lived in the UK for about eight years. I’ve been living outside of France for over a decade, and since 2018, I’ve been documenting my move to Spain in a blog, called Coming to Spain.

I first moved abroad in 2009 to learn English. The initial plan was to stay in London for a year and then to come back to Paris to become a cabin crew member. It turned out, after a year in the UK, that I fell in love with the country, and I ended up staying for eight more years. About three years ago, I left London and relocated to Barcelona. This was an opportunity for me to start afresh in a new country, learn a new language, and, more importantly, get a better quality of life.

Well, not speaking the language was a bit of a struggle at first, especially when it came to doing all the paperwork in the first couple of weeks. Other than that, even though Barcelona is a very international city, being the only black woman in my workplace was a bit daunting at first – you can read out my experiences here. Compared to in London and Paris, in Barcelona, there are a lot fewer first-generation African people born here. Most black people here are either Africans who have come to Spain or people of African descent who were born in Europe or in the States. There are not as many Afro-Spaniards as I expected.

There are a lot of good websites to find a place to live in Barcelona. In my case, my partner and I used Idealista to find a two-bedroom flat to rent. The process was fairly quick and easy. Because we both had secured a job before moving to Spain, we were able to provide all the paperwork required, and we moved into the flat within one week of signing the contract.

Many! In my company, for example, lots of people come from all around the world. Barcelona is full of immigrants. Places like El Born or Gracia are full of international students and expats. So, it’s fairly easy to find people in the same situation as you.

I work in Spanish start-ups, which means most of my colleagues, and now friends, are from Barcelona. From day one, I found most of the locals very open and welcoming. I had no problem making friends, even though I did not speak the local languages. The good thing is that most people here speak English and love introducing their culture to others. Although, this is no excuse not to learn Spanish or Catalan.

I love living near the sea. I love the atmosphere, the people, the food, and the weather. To me, Barcelona is one of the best cities in Europe. You are right in between the sea and the mountains, yet you’ve got access to all of the facilities you could expect from bigger cities. I also love that Barcelona is fairly small, compared to Paris or London. You can easily access most places by bike or by foot.

Another thing that stood out to me is the cost of living. Even though the wages are not as high as in other European countries, your money goes a long way here. Things like food, accommodation, public transport, etc. are very affordable here.

I also love the Catalan and Spanish culture. I love the way people live here. People take the time to eat, to spend the weekends away with their families, and to enjoy life.

Not much, to be honest. The only thing is being away from my friends and family. Even though Barcelona is close to Paris, for instance, when COVID broke, it was hard not to be able to go home to see my parents.

In general, I find Spanish people very open, to be honest. Like I mentioned earlier, I love the Spanish sense of hospitality and sense of community. People here are very close to their families. Most of my colleagues spend their weekends away with their grandparents, which I find very refreshing.

I love Spanish food. It’s very rich and tasty, from tapas to seafood and wine, and I couldn’t ask for more. Here, food is sacred. They have like 10 words to describe breakfast, the snack after breakfast, the time after lunch, the snack before dinner, and the list goes on and on. From one region to another, the cuisine varies, and so far, I’ve not found one thing I dislike. And boy, the quantities are generous here, so it’s not for the faint-hearted.

Try to immerse yourself in the local culture from day one. Meeting other expats is great, but you’ll learn so much by hanging out with locals. The language is a big thing too. Here, you can easily get by only speaking English, but I do really believe that learning the language will only improve your experience. You don’t have to be fluent, of course, but learn enough to follow a conversation and to exchange words with people. Trust me, it will go a long way. And first and foremost, be open: open to meeting new people, learning a new culture, and discovering a whole new world.

For now, I plan on staying in Barcelona for the foreseeable future, unless another opportunity comes my way :).

You can keep up to date with Laetitia’s adventures on her blog, Coming to Spain, and on Instagram.