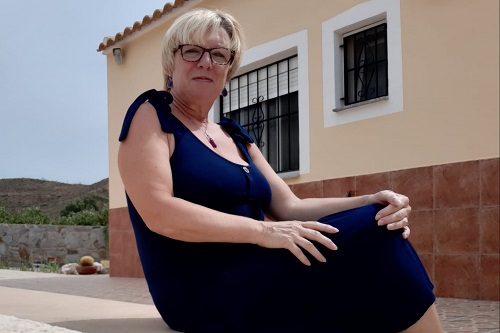 My name is Loraine Marshall. Before moving to Spain, I had my own business in property management and student rentals. I met a businessman in 2009 and started a relationship. I lived in Sunderland in the North East of England, and he lived in York. The relationship seemed good, and we spent weekends together either in York or Sunderland. We had two or three holidays a year. I worked from my home office four days per week, while he travelled the country as a business consultant keeping his weekends free. In 2015, he made the decision to view a Spanish property and telephoned me to bring my passport at the weekend as we were going to Spain.

He had told me he had always thought about having a home in Spain. We flew into Alicante and drove down to Cartagena the next day. The property was in the countryside, 20 minutes’ drive outside of the city. We looked at only one property that he said ticked all of his boxes. He made an offer on that property before flying home. This was January 2015. He expected that the property would be completed by April, but unfortunately, there were some inconsistencies with the legal documents and the property fell through. As we were in La Manga for a week, we then spent the rest of the time viewing lots of different properties in Cartagena in the region of Murcia.

Eventually, when we found something that the two of us thought would be suitable, he was about to make an offer. Then, for some reason, he made a visit to the agency that had shown us the most properties. He was telling them he had made a decision on a place. The agent used a tactic to put doubt in his mind, telling him about issues with the area. They then reminded him of another property that we had viewed that would be more suitable. For some reason, he asked the agent to make another appointment to view that property again.

On the second viewing, he came to a decision to bargain on the price and made an offer. So, from agreeing on something together, he was now flipping to another property.

In three months, the property was completed. So, by June 2015, the property became our first home together. It was to be our retirement home.

The property was purchased as fully furnished, but on arriving at the house, he discovered that the owners had stripped the place bare. There was only an old bed base and some wardrobes that they didn’t remove.  The house was going to be a holiday home until we could both fully retire.  We very soon realised that the house could not be left unoccupied for long. For example, if it rained or there was a storm, the power would cut out. Then fridges and freezers would be left to defrost and fester. This scenario happened a few times.

By January of 2016, we made a decision about the construction of a pool, and work got started not without complication. Does anything go right the first time in Spain? In March, we made the long drive from York through the tunnel to France and then Spain to reach our home in Cartagena, with my car full of items we had brought with us.

I was going to be overseeing the construction work to make sure that it was completed before his son’s 30th birthday later in June. While he returned to his York home and work, I was able to continue with my property business by working remotely from Spain. By this point, I had also been learning about an online business idea to build up an online store, selling via Fulfilled by Amazon, and had started making sales.

Neither of us applied for residency at this point. But we did obtain our NIE numbers, open Spanish accounts, and register at the local authority on the Padron. The process was not very difficult.

Eating out is much cheaper than in the UK. We found that there were a lot of restaurants in the coastal resorts that did menus of the day, ‘menu del dia’, and the prices in 2016 were €10 each. There were four plates of food, starting with a salad, then first course, a second course and dessert, plus a bottle of wine between two people for €20. This is the cheapest end of dining out. Food shopping could get expensive, depending on where and what was purchased, but in general I would say the cost of living is lower in Spain than in the UK.

Some banks employ English speaking employees, and we did not have any issues finding and opening accounts.

There is a community of expats in the Cartagena countryside, but you do need to be willing to socialise. Go to the local bars and talk to neighbours to find out what is happening.

I started to meet with neighbours after being invited to join an exercise class in the local social bar. Eventually, I became friendly and chatted to a number of locals and slowly built up connections.

What I liked most was being in the countryside, the open-air, the slower pace of life, and the proximity of the coastline. I enjoyed learning Spanish and being able to socialise. In 2019, I even took up dance lessons with the locals to take part in the Cartagena Carnival in February 2020.

Right now, I am in a very precarious position.

In August 2020, my partner of eleven years terminated our relationship very abruptly. He basically betrayed me and then abandoned me living in his property here in Spain. Despite him writing me a “Dear Loraine” letter setting out how he would help me financially, things very soon turned quite nasty. Within two weeks, I had gone from being offered not less than 50% of the sale proceeds of the home we were meant to share in our retirement, to him threatening me with eviction within four months.

Then two weeks after he left Spain for the UK court to evict me, and I left with just my personal possessions. Despite trying to cooperate, negotiate and mediate, he kept moving the goals posts. From 50% of the sale price to nothing at all, then £13,000, then £40,000, then down to £25,000. It was an impossible situation.

Last year, he returned to Spain with his new wife, and we had yet another attempt at negotiating. I thought we had a solution and a buyer for the property. His offer was £10,000 in two weeks and £30,000 on sale agreed, and I had some time to find somewhere.

The sale fell through, but he had moved the goal posts again. Plus, I had no legal representation. Instead of the balance on sale agreed, he changed it to balance after I vacate. All the legal advice I received told me it should be money first then move, not move then money. So, back to square one.

Holidays and dining out are huge family affairs. Children are all part of the fiestas and holidays. Before Covid-19, there were lots of free events, music and tourist attractions. Like the very colourful and loud Romans and Carthaginians, which takes up a whole week, the Easter parades with magnificent colour costumes, Jazz music events, and lots more.

I would like to give a warning to couples who are not married – especially women who may be dependent or who come to be dependent on their partners’ income. People need to put protections in place. Relationships are built on trust, and you never start out thinking that you will be betrayed or that your partner is going to leave you or abandon you. Which is exactly what happened to me. Even worse, I had to come to terms with the realisation that I had suffered emotional and psychological abuse throughout the relationship.

I want to remain in Spain and continue to recover from the trauma of the situation I have experienced. I very much hope to be able to earn an independent income through various income streams. My dream is to open a retreat for women and help women to value themselves and work on their mindset to empower them to be independent income earners, and maybe support women who may experience betrayal, loss, grief and trauma in the aftermath of what I call the three D’s – divorce, death of a partner, and discard.