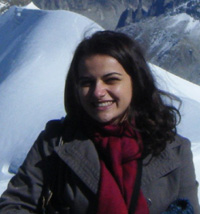 My name is Cristina and I am a Romanian national having lived abroad in at least two different countries for tertiary education studies. Having graduated in Humanities in Cluj-Napoca, Romania, I always thought living and studying abroad is a rewarding experience forging bridges between cultures, people and minds. First, there was a one-year Erasmus experience in France that completely opened my world to new and unfathomed territories. Then, I decided to move abroad in order to complete my postgraduate studies, and what place better than Geneva, Switzerland: an international melting pot of cultures, possibilities and bewildering knowledge.Where, when and why did you move abroad?

After I decided that I needed to continue my studies abroad, I shortlisted my options in terms of university, existing scholarships and local languages.

The latter never seemed to be a problem, since I am fluent in both English and French, with a working knowledge of Spanish. Consequently, I started roaming the external sponsorship opportunities for a set of countries. This proved to be a very tedious process and I recommend to all potential students to start at least one year ahead of their planned studies. The University of Geneva qualified in many aspects to my research proposal, cultural and social expectations. Hence I secured the university’s acceptance letter and applied to the Swiss Confederation Scholarships available for postgraduate studies. In the spring of 2006, I succeeded in getting the scholarship and started clearing the remaining formalities.

As a Romanian national in 2006, I was confronted with the visa process that Switzerland still applied at that time, but which is no longer in place at the present. I had to apply for an entry student visa at the Swiss Embassy in Bucharest and wait a few weeks before obtaining it. My visa application file already included an acceptance from the University of Geneva and the Swiss Confederation Scholarship which considerably facilitated the process in itself. I must emphasize that all these formalities were taken care during the summer way ahead of the planned move to Geneva which took place in October.

This was the tricky aspect of my move over there. Upon receiving the Swiss Confederation Scholarship in the spring of 2006, I was advised to start immediately the process of securing student accommodation in Geneva, being warned that student dorms are limited compared to the existing international needs and private options are considerably more expensive and hard to get on a first arrival. So, while I was given invaluable advice from the International Relations Bureau of Geneva University, I had to apply immediately to a variety of student lodging facilities that are easily to locate on the web. Luckily, international students that are also recipients of the Swiss scholarships do get positive and presumably first consideration in accommodation applications, so after a few weeks of searching, I was granted a positive answer.

Some 40% or more of the population in Geneva is made exclusively of foreigners. It is not uncommon for certain residential areas as Champel or Cologny to have English as the common language spoken on the streets, with French and Spanish ranking in second place. Geneva in particular is an international hub both for students and working professionals: the city hosts prestigious universities and institutes such as the Graduate Institute of International and Development Studies or the European Institute. Both institutions, along with the University of Geneva, provide top graduates and researchers that shine in the United Nations offices located on the exclusive shores of Geneva Lake.

As a student in multicultural Geneva, it is not uncommon to spend most of your studies and work among foreigners that are newcomers just like you or foreigners that liked the place so much that they decided to establish permanent residence. There was also a third case of “local” foreigners that opted for retiring in Geneva and enjoy nature and quiet areas. I found it quite difficult to find authentic Geneva locals because Geneva University also attracted students from the rest of the cantons. Considering that each canton is a state in itself with strong cultural and language particularities (there are four federal official languages), it was quite frequent to find yourself surrounded by Swiss colleagues that reminded you they are from this or that canton, but decidedly not from Geneva. However, you would find authentic locals in small shops hidden through the neighbourhoods.

I spent three years in Geneva and now I am back in Romania. Looking back on my expat experience, I would say that there were some distinctive advantages that outweigh the disadvantages. Among the positive, I must say Geneva is a very rich source of knowledge to anyone who decides to have a stop over either for studies or work opportunities. It is incredible to be able to live and work in two or three different languages at the same time and interact with a diversity of people. From a cultural and professional point of view, Geneva is a must pit stop.

On the other side, there is an administrative hassle that any foreigner has to go through upon arrival and departure from Geneva. While it’s difficult to step in, try stepping out! Having passed that labyrinth on arrival, you become one with the city and blend with the rest. And it is a wonderful experience, although some people find the Swiss spirit a bit too conservative and too toned down for their party appetite. Maybe the Swiss neutrality does permeate everyday life since practically nothing ever happens in Geneva as compared to other cities or capitals in Europe, for instance. Quietness may get annoying.

My expat profile suits a potential student who would want to pursue his/her studies in Romandy region, the French-speaking part of Switzerland or Geneva in particular. To all those who lack French skills and fear this would hinder their chances of studying here, I would say: do not fret! There are hundreds of international university programmes delivered only in English, so you may polish your French skills afterwards. I would recommend checking in advance all sponsorship or scholarship opportunities for studying in Switzerland because either Geneva or cities like Zurich rank high in terms of living expenses. So, unless your parents own a G-500 to fly you over, start contacting sponsors and check your lodging options a year in advance.

I lived in Geneva for three years and completed two postgraduate programmes: an advanced degree in Letters and a master’s degree in Communication and Media along with some top level international professional experience. Upon my return in native Romania, I had the opportunity to apply not only my studies but, most importantly, my multicultural experience in working positions that placed me ahead of the rest through knowledge and skills. At the moment, I am pondering on my professional perspectives over here, but I do not exclude continuing my expat experience somewhere else because it turned addictive in a positive and rewarding way.