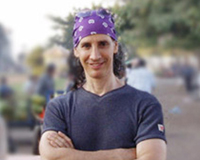 I moved to Thailand in 1999 after visiting several other countries and decided to stay here because it was centrally located in Asia, living conditions were good, people were friendly, prices were low, and the food was great. I lived a hectic lifestyle in LA working in the movie business, and felt a slower pace would suit me.

What challenges did you face during the move?My challenges were low because I was used to living with people of different races and cultures. However, when I first moved here, graft was extremely high and I got hit up for money from officials and police every time I left my house. That has since stopped at that level.

At first, I stayed in hotels because they were so inexpensive, then went through a rental agent and found my perfect place.

After that, I rode around the neighborhoods I wanted to live in looking for rental signs. Some people will try to rip you off, and some won’t. By going to rental agencies and getting a feel for prices, you can keep that to a minimum. Half the time, you won’t get your security deposit back no matter how well you take care of the property. You don’t have recourse to laws here you have in other countries, and it depends on how much you’re willing to pay certain people as to how effective the enforcement will be. Contracts are mostly meaningless here, as it takes a lot of money to enforce one, and people just ignore them. Of course it depends on how much money is involved and where on the social ladder you stand.

I’m the only foreigner in my neighborhood, but there are many in the city I live in. They mostly live in enclosed neighborhoods with walls around the estates and unarmed guards at the entrances. Outside of these compounds, almost every house, except in rural villages, has a wall around it. I live in an all Thai neighborhood.

I get along great with just about everyone now. I’ve learned the hard way not to do business here, so that has taken most of the negativity away. The positives of living here far outweigh the negatives, which are mostly just cultural differences and ways of thinking. People are general friendly and helpful. You can walk around at night and not fear for your life. Women walk alone on dark streets. (I wouldn’t advise this in Bangkok, though.)

Though I live in the second largest city in the country, it’s very small compared to where I’ve lived in the States and other countries. I can get completely across town in 20 minutes. I no longer own a car, but go everywhere on a motorcycle.

Everything except imported goods is very much cheaper here.

Especially medical. And food. And rent. You can buy a house for a fraction of what it cost stateside, but you can’t own the property. You can own a condo, though. I can walk down the street and have great Thai food for a $1, or go American, or European, or almost any other national food for $5 to $20.

Now there are very expensive hotels and restaurants for those who wish to be pampered, but usually tourist and the newly arrived go to those places. There are first rate shopping malls with every convenience, and you’re still only 15 minutes from the countryside. In my case, I live next to the jungle which is mostly undeveloped for a hundred miles. There are hiking trails and ancient ruins fifty meters from my front gate.

There’s an international airport on the edge of town with direct connects to many countries. There are also many activities and programs for foreigners, and special interest clubs.

Mostly, I like everything about my expat life. The things that give me problems are just me having to contend with alternate ways of looking at the world from my host county’s perspective. One thing that every expat dislikes here is two-tiered pricing. This is where they charge one price for Thais, and another, higher price for foreigners. Until I got permanent residency with an ID card, I’d have to pay much more to enter a national park, a temple, and other venues. Some shop and markets will still try to “cheat” you if you don’t understand Thai, or know the prices of things. It happens a lot less than it used to.

It’s a thing call “face.” Everyone’s heard of someone losing face, which basically means being humiliated. Americans have no clue what this really means to an Asian. It controls everything they do, and until you understand this principle, you will not fare well in Asia. Americans are different among themselves, and different from Europeans, but they are really different from Asians. Americans, by culture and nature, are direct and confrontational, which is the exact opposite of every Asian culture.

In the fifteen years I’ve lived here, the city where I live now has gone from third world to first. Just in the past year, three huge shopping malls have opened. The city has almost grown out to where I live, where before I was considered to be in the country. Basically, I can get almost everything people in the States can get, only it’s easier because everything is so close by.

I couldn’t leave in a better place for food, unless I lived in Bangkok. There’s every national food you can think of here. And of course, the best Thai food in the world. Ironically, one of my favorite foods, Cambodian, you can’t get here, probably because of the centuries-long animosity the two countries have for one another. A lot of food here is fusion, a cross between Thai and some other national food. It’s usually really good. Pizza is very popular here, but there are only two places you can get anything that resembles a New York pizza. The rest are facsimile, more like pastry, than pizza, but still good.

Don’t expect Thailand or anywhere in Asia to be America, or Europe, or any other country. Don’t try to change the Asian way of thinking. It will backfire every time. Know that you will always be an outsider, and accept it. Smile a lot. Almost everyone will smile back at you. Most smile at you before you smile at them. It’s engrained in Thais, and although there may not be any pleasant thought behind the smile, I find it it’s much nicer to be greeted by smiles, than frowns.

To have all my books translated into the all the world’s languages, and have the movie I sold to China last year hit the silver screen in a theater near you.

I can be reached directly at writer@stuartland.com