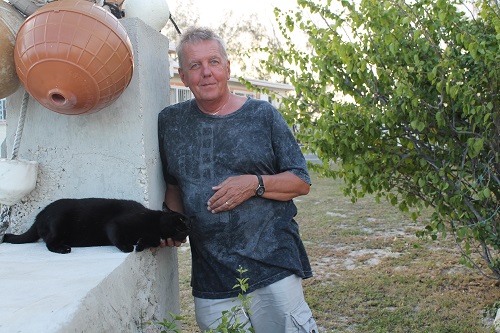 I am a journalist and have been so for 30-odd years. And some of those years have been odd – but always interesting. I spent many years writing for the local newspaper in my home island, Guernsey. That’s a British island off the coast of north-west France.I’m a features writer, which means I don’t do news and I’m not an investigative type. I write about anything that the editor or I feel is interesting. A new band, a charity, self-harmers, people with unusual occupations… whatever. Restaurant reviews is a good gig if you can get it, because it involves free meals. And I wrote a column for the Saturday paper about anything I fancied – as long as it was entertaining and perhaps funny.

My life changed when, having been divorced for seven or eight years, I met the woman who became my new wife. She is Venezuelan, a paediatrician, and like me she has lived in lots of places. We tried England but immigration restrictions scuppered that. We went to Venezuela and, having done a TEFL course online, I taught English as a foreign language in Caracas. But Venezuela was beginning its decline towards the mess it is in now, so we had to think again.

My wife got a contract in the Turks & Caicos Islands (just south of the Bahamas) and we spent a happy year there before moving again – to Tobago, little sister of Trinidad.

The first “challenge” about moving from one country to another is that you have to pack up all your stuff and ship it – which is stressful, time-consuming and expensive. But we put all we had (no furniture, thank goodness) on a big pallet and got on a plane. The pallet arrived a month later and I went to Trinidad to collect it.

The second challenge was settling in and making new friends. We had a nice house high on a hill overlooking the capital, Scarborough.

I wrote to all the Trinidad newspapers and was soon invited to Port-of-Spain to meet the editor of Newsday. She gave me the job of Tobago correspondent and Sunday columnist.

I didn’t meet many expats in Tobago because it isn’t that kind of place, unlike Grand Turk and where I am currently, Panama, but through my work I met plenty of interesting people. Interviewing people is a large part of what I do, and you quickly get to know someone by doing that. Then, if you do a good job and he or she likes it, you’ve got the makings of a friendship.

What do you like about life as an expat?

What I like about being an expat is discovering a different culture. Even if you cook for yourself you find yourself doing different things because the ingredients you take for granted aren’t available and there is loads of stuff you’ve never tried but is cheap and easy when you know how. For a few weeks we tried in vain to find some cilantro (coriander leaves) and were amazed that not only did none of the shops have any, but they had never heard of it. Eventually we were introduced to Shadow Benny, which is not a person but a herb, properly called Chadon Beni and officially culantro, with a u rather than an i. The leaves are long and slim, a bit like dandelion, and it tastes almost identical to cilantro.

Tobago is a quiet, sleepy place that could probably have a decent tourist industry if it had the inclination and the energy, but the blessing and curse of the Caribbean is the laidback character of many people. British and American standards of business basics such as punctuality and even showing up to do a job you’ve accepted are not to be taken for granted in the region. Sometimes, particularly out of town, you get the feeling that if a small garage owner has made enough money to last the week, he won’t turn up on Friday because, as he sees it, he doesn’t need to.

It can be frustrating, then, if you’re trying to get something done that involves relying on other people. The attitude was even more prevalent in Grand Turk, with a tiny population seemingly having little ambition.

Tobago has plenty of beaches and even a good one for surfing, although when I went there to talk to people and write about it, the locals were not keen to help me because they didn’t want the world to know what they had. They didn’t like planeloads of Brazilian lads breezing in and taking over their waves.

Another thing I have experienced in the Caribbean region is a form of discrimination based on my colour. I’m white, middle aged and people seem to think I am wealthy (which couldn’t be further from the truth). So sometimes I can feel resentment against me when I haven’t done anything to deserve it. Tobago also has a dark history of European expats being murdered. The favoured weapon is the machete, known locally as a cutlass.
I don’t mean to alarm anyone, but it’s a reality that in poor countries you should be aware of potential dangers.

I’ve been robbed a few times (not in Tobago, but once in Trinidad, when on a day trip I was somehow separated from the bag containing, among other things, my Kindle and passport).

Of Trinidad itself I can’t really speak because I’ve never spent more than a day or two at a time there. But it does have a shocking murder rate and barely a day goes by without the papers reporting a gang-related murder.

The perception in the UK and probably elsewhere is that all Caribbean islands are quiet and idyllic, with happy locals selling fruit and fish, and although that is true of Tobago to a certain extent, the economy in Trinidad is based on oil and the petrochemical industry long ago replaced the coconut plantations.

I was in Tobago for about a year and I loved it, living a simple life based around going to the beach whenever possible. There are good restaurants here and there, particularly between Scarborough and the airport, but the place is not devoted to the tourist, so don’t expect to walk around the capital at night in a happy throng moving from bar to restaurant to club. If you live there you’ll have to create your own network and social life.

But with a few friends and an accepting nature, it’s real life with tropical heat and beaches.

Since leaving Tobago we have been in Suriname (formerly Dutch Guiana, on the northern coast of South America) and we’re hoping to be back in the Caribbean soon, but as John Lennon said, “life is what happens to you while you’re busy making other plans”.