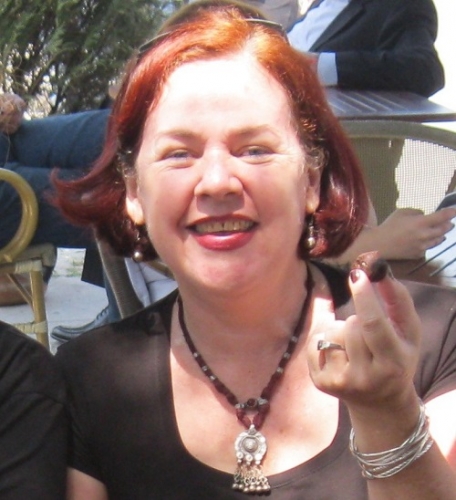 I’m from Australia where I trained as a sociologist but became an English language teacher instead. I started a blog about three years ago and then decided to get more serious about my writing. Three books later, I now also write for international websites and magazines. I’m especially passionate about rice pudding and funiculars.Where, when and why did you move abroad?

Way back in 2000 I moved to Istanbul, but an economic crisis forced me back to Australia a year later. Over the years I spent more and more time in Turkey and I ended up with more friends in Istanbul than I did back in my hometown of Sydney. It made sense to make Istanbul my home so I moved with my husband in 2010.

I didn’t just come to Istanbul with a backpack. No, nothing so simple. We shipped over all our furniture, bought an apartment, got our paperwork processed – all on our own, with no help from an agent, in our very limited Turkish. It was really hard going at times but the result was worth it.

As the majority of my friends are Turkish I chose to live near them so in my suburb there are very few other foreigners. But Istanbul is a big city and there are numerous expat groups to join if you want. A lot of expats only stay a year or two and social media is a great place to get advice and quickly meet up with like-minded people.

My social life. Turks work long hours but spending time with friends, staying in touch and showing that you care are really important to them. It’s not unusual for me to go out on a Saturday morning and get home much later that night. Over the course of the day I might have brunch with one group of friends, meet someone for coffee in the afternoon and do some shopping, catch up with a couple we know for a walk by the water and then dinner out. At the same time other friends might text me and join in whatever I’m doing.

Bureaucracy is the worst part of expat life. In a relatively short space of time you have to register yourself in a system geared to locals who’ve had their whole life to get it done. On top of that you have the extras which only apply to foreigners. Opening a bank account, getting a tax number, registering in your neighbourhood, applying for a resident visa – these things are all very complicated and often chicken and egg in nature. For example, in Turkey you’re supposed to have a local bank account showing a balance in order to get your residence permit, but many banks won’t open an account unless you show them a resident permit first. This is the theory. Until you learn that in practice you just need to keep on asking until you find a bank willing to open an account without said permit, you feel you’re going to go insane.

Australians (at least according to my Turkish friends) are very direct. If we have a problem or need to talk about something we launch straight into the topic. Turks on the other hand, approach things much more indirectly. They’ll sometimes even give up a friendship rather than talk about something you’re doing that bothers them. That’s been hard to adjust to.

This is a hard question to answer. Everyone has their own dreams and their own limits. However, I’d say if you’re planning to move to a new country, make sure you always have a plan B. That way, if you step off the plane and your dream job is actually a nightmare, or the place you’re given to live is horrible, you have the means to stay in the country independently while you look for alternatives.

Continue to write about Istanbul and Turkey, and take advantage of any opportunities that come my way.

You can keep up to date with Lisa's adventures on her blog, Inside Out In Istanbul.