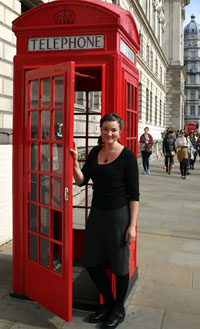 My name is Ariana, and I am an American expat that is living in England– but this is not my first overseas rodeo. My parents became missionaries and moved with their seven kids to the Philippines when I was just eight years old. I grew up on the island of Mindanao, speaking the local dialect (Cebuano) fluently, eating dried fish with gusto, and snorkelling every week until I went to boarding school in Manila. When I graduated from high school, I moved back to California for college, but continued to hop on an international flight a couple times a year, both to visit my parents and to discover new places. I always had a hunger to see more of the world, and to get involved in humanitarian projects wherever I could.

After growing up overseas, I always imagined that I would probably live in another country at some point in the future. It was hard for me to imagine living in America for the rest of my life, since I didn’t feel a particular sense of belonging or ownership for my “home” country.Moreover, it was difficult for me to think of raising a family in America– it would be a childhood I just couldn’t relate to. Since I had married a special education preschool teacher and intended to be a stay-at-home mom, however, I just didn’t know how I would make it back overseas.

After we had our daughter, we moved to Portland, Oregon, bought a house, and settled into the life that is expected of a young American family– paying the bills, looking for good schools, etc… The job that my husband had taken in Oregon was actually different from being a preschool teacher– he became an autism specialist, working with families on how to help their children with disabilities. This turned out to be key for us.

A year or so after we moved for this job, the district endured severe budget cuts, and many at his job were notified that they would be let go at the end of the year. Everyone was scrambling for new positions, and during this time someone mentioned working for the US military overseas. Once this idea came up, I was completely sold! It turned out that Jeff didn’t end up being let go in the end, but by then the seed was planted, and we started applying for different positions in Europe.

A year later (in 2010) Jeff was offered a position in Bavaria, and we moved there in July of that year. That’s not where our adventure ended, though! He entered a really dicey political climate at his new job, and although we absolutely loved living in Germany, the job itself was really awful. It never crossed our minds when we sold everything and moved over there, that his job could be in jeopardy. Yet, seven short months after we arrived, his job ended, and we had to return to the States and start looking for another position.

We were absolutely determined to get back overseas, and our tenacity was fairly quickly rewarded. Jeff had made a good impression with his contracting agency, and he was soon offered a job in England. After five months back in the US, we headed back across the pond again, to start his current job. It’s been almost a year since we arrived here, in August 2011. We are so glad we held on and made our way back– we are very happy here!

If I could make that first move all over again, I would have opted to ship many of our belongings over to Germany. Instead, we sold and gave away absolutely everything. When we arrived in Germany, I was horrified to realize that all the household goods and even basics were incredibly expensive. We literally lived without any furniture for several months after we arrived, since we just couldn’t afford to replace all of the things we needed. And in our little town, there were no second-hand stores or yard sales!

When we moved to England, we were able to ship over many of the things we had bought in Germany, so that was really great, and made settling into a new home much easier. The greatest challenge on this side was not being able to find a home to rent for a couple of months. We had to live in a hotel, and then temporary rentals, which was of course expensive and uncomfortable. But it was worth it to wait for the perfect place– we ended up being thrilled with our home!

One of the hardest parts of living in England is the social climate where we live. People generally tend to be very reserved, seem pretty cold. (Keep in mind that I grew up in California and the Philippines, where people are very friendly!) It has been challenging to try to get to know that other parents at my daughter’s school and even just walking past people and getting scowled at can be wearing. I think it takes a lot of tenacity to make friends and be accepted as a part of the social scene here. We’re up for the challenge, but it’s not easy, and I certainly have days where I just feel so tired of feeling like I’m invisible.

I love the aesthetic aspects of living in Europe. The architecture is so beautiful, and I love the sense of history on every street. Something I love about England in particular is all of the beautiful countryside that surrounds us. It’s easy to get to farms, and the coast is only an hour away. It is just gorgeous here, and taking a drive just about anywhere is a real treat!

Choosing the expat life involves risk. We had no idea what was ahead of us when we made that first move to Germany. It was very scary to feel like we were losing everything when the job fell through, but I think I would do it all over again. The main thing is to be willing to face your fears. You must ask yourself what will happen if it doesn’t work out. Be brave! I believe it’s worth the risk, and can be very rewarding!

We plan to stay in England for at least another year. The thing about living abroad is that you start to wonder what else is out there, and what life would be like in other places. I, for one, would love to end up somewhere warm and sunny someday! So when my husband’s contract here ends, we will have the option of renewing or taking another contract somewhere else. And if there’s a position available in Spain or Italy, we will have to seriously consider that!

Ariana shares more about life in the UK through her blog http://and-here-we-are.blogspot.co.uk/.