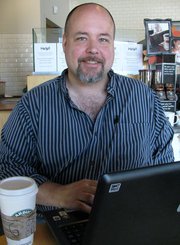 I’m a 49-year-old former RN (Registered Nurse) from the United States. I’m now a writer and sculptor, living and working in Exeter, UK.

I had been working as a nurse in California for four years before moving to the UK in 2010 to marry my wife. We had been engaged for the previous 7 years, living together for most of that time as I finished my nursing degree and she her PhD.What challenges did you face during the move?

I hired a company to handle my visa application, and they applied for the wrong type of visa; they agreed to re-apply at their expense. When they finally got it right, the British Embassy in California claimed that I didn’t include my passport, and I had to pay through the nose to get a new one expedited, and to reapply. After which the Embassy called to apologize – one of their workers had mis-filed it. In total it was a delay of two months, during which I had no income, which reduced my moving budget: I had to leave a lot of books and possessions behind. My then-fiancée had been working in the UK for several years by then. We had been travelling back and forth, one way or the other, every few months, to visit.

I moved in with my wife when I arrived, and we were married within the year.

There was a large immigrant population in Birmingham, where we first lived, including a number of Americans. In the South, where we are now, there are fewer. But we live in a University town that attracts people from all over the world.

I get along well with everyone I meet here, but haven’t made any close friends yet. People seem to welcome the fact that I’m an American.

The UK is a fascinating place. I’m becoming very interested in the history and culture, especially the monarchy and the changes it’s been through. It’s broadened my perspective; by adapting to another culture, literally on the other side of the planet, the world seems more accessible to me. I also enjoy the honesty, and privacy, here. People don’t “glad-hand” you as they might in the USA. Anyone exuding a great deal of charm or friendliness is viewed with open suspicion. The benefit of this is that people allow each other more respect, and more personal space.

At first the population seemed hostile or even rude; but now I view what I thought to be my former friendliness to others as, instead, a kind of imposition. And this superficial coolness melts away when anyone is genuine need: when I witnessed a passenger on the bus who had lost her way, no less than four other passengers sprang to their feet, maps in hand, to sympathetically help her get her bearings. The English are a tough people, but there are hearts of gold, schooled in decency and fair play, beneath those hard exteriors.

It’s been difficult to find work. My nursing degree is no good here, and it took some time to get authorization to work or do business of any kind. The climate is also a shock, coming from sunny California; both my wife and I seem more susceptible to what locals call “the lurgey” – persistent colds and flus.

Accents and idioms were difficult to understand at first. And there is invariably a subtext to conversation, a lot of routine irony and sarcasm, as well as codes of politeness and social distance that must be maintained.

The British penchant for queuing (standing in line) is most well-known.

But it may also take years for your neighbours to be comfortable enough with your presence to speak with you. The codes of social distance preserve individual dignity and peace; it is not so easy to simply strike up a conversation here. One must also never disagree about the weather: if someone says “what awful weather this is,” you must never say “Oh, it’s not so bad, really.” That would be a slap in the face, and the person might tell the whole neighbourhood how rude you were to them. Once you understand the codes, there’s no problem. It’s learning them – the hard way – that can be painful or awkward.

Plan ahead. Apply for your visa FAR in advance of when you think you will get it, and allow for mistakes and delays. Make sure you have enough money to make the jump, and establish yourself as soon as possible. For those entering the UK, read up on the culture. Politeness is very important, and codified, here. There is a Debrett’s guide to British culture, and a wonderful book by Kate Fox called “Watching the English.” Bill Bryson is another author to read. Listen to the words and phrases people use, take note of them, and use them yourself – though faking a local accent is decidedly not recommended. Knowing the culture and language can be the difference between society and isolation, career success and failure.

Rather than retrain as a nurse in the UK system, I’ve decided to keep writing and sculpting, after some very modest but encouraging success. My wife’s career is rooted here, and therefore we are likely to remain in the South of England indefinitely. This is farm country, so we might obtain a “smallholding” (farm) and raise some goats. All of Europe and Asia are closer to us from an English home base, and we plan to explore other places from here in the future.