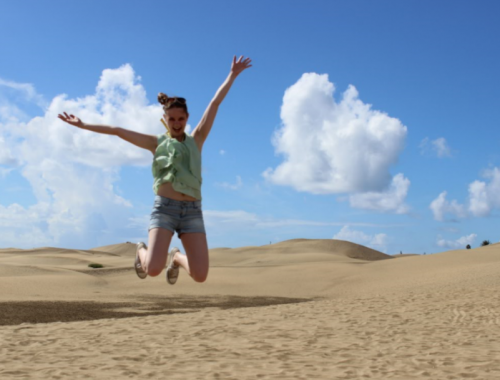 I’m Maaike, marketing executive in the tourism industry, blogger and freelance writer. I’m an expat in London, UK, from the south of the Netherlands.

The first time I moved abroad was back in 2012.That was to London to do an internship for six months. I fell in love with London, which resulted in me moving back to live and to work in London in 2015. There’s so much to see here, so much to do… That’s what made me ‘fall in love’ with this part of the world.

Being ‘new’ in a huge city like London meant that I really had to go out there and try to meet new people and make friends. Loneliness is an easy thing to fall into here in London, and I tried to do everything to avoid that. I joined a dance school, attended expat and blogger meet ups and tried to socialise with co-workers. A very exhausting and sometimes frustrating process, but which resulted in me building up a social network that I still benefit from today.

I feel like most people here are expats. One thing about London is that it’s super multi-cultural. It’s amazing being able to meet people from all over the world.

I love the contrasts of London. The multi-cultural aspect of the city means that not one street is the same. I can go celebrity and rich-people spotting in Hampstead Heath, eat the best Chinese food in Chinatown, try to learn the Cockney accent in East London, or get South American ingredients at Brixton market.

Also the contrasts in old and new here in London is amazing. The Brits love their traditions as well as ‘bragging’ about their cultural heritage, architecture and the like. At the same time they’re very forward-thinking and try to be ‘the first’ with a lot of things. An example: a 15th-century church in London can be neighbours with a brand new skyscraper. I don’t think that there are many places in the world where these contrasts come out clearer than here.

What I dislike most is that the expat life in London is a very rapidly-changing one. I’ve made a few expat friends here whom I consider to be some of my best friends. Unfortunately so many of them have already left the UK. Saying ‘goodbye’ so often does hurt a little every time.

Cultural differences are not that big between the English culture and the Dutch culture I find. However, the most noticeable one is that I find that British are a bit more ‘beating around the bush’ – like when it comes to communication compared to Dutch people. We tend to be much more straightforward and direct in the way we communicate and make decisions. I had to get used to that and adapt my behaviour sometimes, especially on the work floor.

Do what feels right to you. If you’re moving to London, life can get quite overwhelming and hectic. Don’t let it overtake you. It’s very easy to fall into anonymity in a big city like this. If you like that, good for you! If you’re more like me and need company, be pro-active. Join sports clubs, meetup groups or activity groups. There are so many like-minded people here, so it’s easy to build up a social life. You just have to work for it.

I’m planning to stay here for a little while longer, but will eventually move back to the Netherlands.

You can keep up to date with Maaike's adventures on her blog, Travellous World.