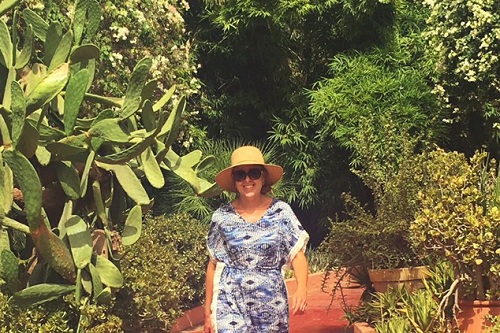 I’m Megan, a 27 year old Australian girl who’s been an expat in London and exploring Europe for the past 5 years.

I moved to the UK in 2012, when I was 22 years old.I was always drawn to England, particularly London as my grandfather was born and raised here so it’s where my heritage lies. I have always been the adventurous type, reading stories like the Famous Five and Robinson Crusoe instilled an enormous sense of wonder in me and so at the age of 19 I made the decision to take advantage of my grandfather’s British heritage, obtain an ancestry visa, and move to London. After 2 years of saving and planning I was on a one way flight to Europe! I travelled across the continent for 3 months before settling in London.

My biggest challenge was finding the courage to book the one way flight! I procrastinated and put it off for weeks, I told myself it was a bad idea. I didn’t know anyone in London and I’d never travelled long term before, if something went wrong what would I do?! My usual saviours (Mum & Dad) would be on the other side of the planet. In the end I told myself that for the sake of having no future regrets I had to at least give it a try and if I didn’t like it, home was only a flight away. Once I’d booked the flight there was no turning back!

The second biggest challenge was leaving my family. We are very close and before my move had never been apart for more than 2 weeks at a time. The knowledge that I wouldn’t see them for 12 months or more created a hurdle that was very difficult to jump! FaceTime helped with this a lot.

Yes, there are expats everywhere! Walking down any street you will hear a cocktail of different languages being spoken, London is the most diverse city in the world.

I love so many things about London, hence why I am still here 4 years longer than I thought I would be! I love the diversity and multiculturalism of it, it’s an open and accepting city where you can be exactly who you are without judgement. I love the electric vibe too, you can almost hear it buzzing in the air, there’s always something happening. I love the history that exists everywhere you look, and I love its close proximity to Europe. I’m able to afford 5 or 6 holidays per year because travelling from London to anywhere in Europe is cheap and the journeys are short.

I must admit that the long winter is sometimes hard to bear! It gets icy cold but rarely snows so it’s just wet and freezing, after two months or so you’re willing the warm weather to arrive! I do love a winter Christmas though. It’s also hard being so far away from my family and friends, but at the same time my parents and I have had two wonderful trips in Europe together, holidays that wouldn’t have happened and places they wouldn’t have visited if I hadn’t moved here.

I think the biggest cultural difference is the way people interact. Without generalising, where I’m from in Australia people tend to be more open and chatty. Here in London I have found people are often quite shocked if a stranger speaks to them! Besides that, the British and Australian cultures are actually very similar with their love of pubs and sport.

The meals here are much heavier, more winter inspired which I love. Nothing beats a hot Sunday roast or a steaming bowl of soup in the colder months! In Australia we tend to eat lighter meals such as salads and seafood as it suits the hot weather.

I love that there is never a dull moment in London, it’s a very youthful and vibrant city. I also love that you’re always doing something different, I have never felt the sense of monotony here that I had in Australia. The only slight dislike I have is how expensive it is! The cost of living is very high, but it’s worth it.

You must come here with an open mind. There are so many things you could focus dislike on but you mustn’t allow yourself to do that. If you see the weather, the cost of living and the busyness as bad things you won’t like it here and you’ll be blind to all the great things about London. It’s so easy to love this city if you keep an open mind and a positive outlook!

I have lived here for 5 years now, in 6 months’ time my plan is to leave London and spend 12 months travelling through Central and South America and then Africa before migrating back to Australia. I’ll miss this crazy beautiful place – I’ll be back though. I can’t wait to show my own children where I spent some of the best years of my life!

You can keep up to date with Megan's adventures on her blog, Foreign Aussie.