Visa Diaries: The Joy Of Forms 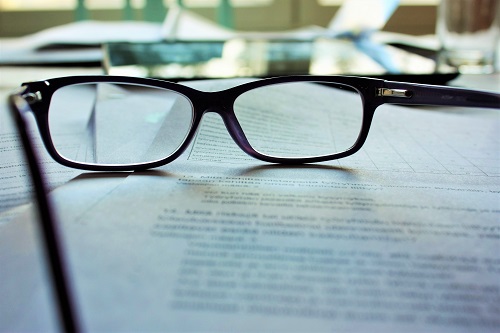 This is part three of Genevieve Rogis’ Visa Diaries series. You can also read part one and part two.

The past two weeks have been filled with all kinds of surprises and anxieties.

All the evidence has been gathered together. Letters have been signed and dated, text messages received, phone logs and photos compiled and printed. Our relationship has been quantified on paper, ready to be dissected and analysed as to its authenticity and economic stability.And so, the time has come to tackle the last, horrific hurdles. Filling out a form, and forking out the cash.

I foolishly thought this would be the easy part. Our plans had, after all, been in place for months. Andy would be sending all of his documentation to me from the UK. I’d go online, fill out the form, pay the money, and hand everything over at the British consulate. The end.

I checked in with a lawyer again in early March, just to make sure we were all on the right track, and that our documentation exhibited a strong and valid case. It’s lucky I did, because she informed me that the application process had changed.

Following what is becoming a Great British Tradition, the visa application system from Australia has been outsourced to a private company. But only partially.

No visit to the British Consulate. No simple handover of all my documentation to one person to be processed in one place.

Instead, I visit a private office, where I hand over my application and passport. Then, I have to ship all of my supporting documents separately to Sheffield in the UK for processing, at my own expense and risk. I won’t go into how angry this makes me. I’m sure you can imagine.

But before I got to that hurdle, there was the online application to deal with.

The application form for a Settlement (Unmarried Partner) visa in the UK is just as fun as you’d imagine. It is filled with questions that seem irrelevant, poorly worded, or just plain idiotic.

Question: When did your sponsor arrive in the UK?

Question: How long do you intend to stay in the UK?

Andy was born in the UK, and I am applying to settle, which implies some permanency. These questions had me stumped for a moment. I grant you, some UK citizens may not have been born there, and some immigrants might not intend to be permanent.

My somewhat facetious answers of Andy’s birthday and ‘indefinitely’, however, are in fact appropriate.

It asked me to list all my travel outside the UK in the past ten years, then only gave me ten slots to do it with. I laugh. I’m an Australian living in the UK. How long have you got?

My favourite part, however, was the guidance provided in the form to clarify each question. Without fail, it simply repeated the question. Word for word. As if to enunciate clearly: this is a test. If you don’t understand, you don’t get to play with us.

And the UK government provides little other help. Guidance notes are almost impossible to find, gathered together in little groups on web pages that are reached by random links scattered like so much fairy-dust that vanish like leprechaun gold as soon as you look away.

So gratitude goes again to my lawyer. Without her, I would have been at a loss to know if I’d answered each question correctly. Which is somewhat terrifying, because the UK is notorious for knocking back applications based on accidental errors. It’s absolutely imperative to get it right first time or, like Ai Weiwei, you might be threatened with a ten-year ban because you ticked the wrong box

But we got through it, together. And then came the money.

I was expecting to pay for my visa. It’s not cheap, at GBP£1,195, but it could be worse. Many countries, including Australia, are far more expensive.

In addition, Andy and I chose to pay GBP£500 or so for a priority service. This could be the difference between me getting back to the UK in April, or having to wait until June, or even July.

These costs were expected. But there were a few more hidden money-sinks getting ready to pounce.

First, there’s the Immigration Health Surcharge. For those who don’t know, this is a fee that was introduced in recent years in order to offset the expense of immigrants using the NHS. The rationale is that British citizens have been paying National Insurance all their lives, while immigrants haven’t.

I was exempt from paying when I last applied for a visa, due to a reciprocal agreement whereby British born immigrants to Australia received free healthcare here under our own version of the NHS. No more. So add a cool GBP£600 to the visa bill.

Then there was the fee I paid for the pleasure of applying for my visa in Canberra. As I mentioned earlier, the application centre in Canberra has been outsourced. And the Home Office isn’t picking up the bill. Applicants are.

Granted, the additional cost was negligible when compared to the whole, at about GBP£60. Still, it’s a little galling.

Finally, there’s the not inconsiderable cost of posting my documents quickly and securely to the UK, at a further GBP£75 or so.

For those playing along at home, that brings my final tally up to GBP£2,430, so about double what it says on the tin.

But it is done! And I have to say, it’s a huge relief. The past couple of weeks have included their fair share of ranting, much to my poor mother’s distress, but I am incredibly fortunate. Not only do I have Andy, but between us we have the will, the proof, and the financial means to make this happen.

There are many out there who aren’t so fortunate. I have married friends who can’t prove that they’ve been living together for the past 7 years, and so are ineligible. Others whose recent investment in a business makes it impossible for them to meet the income requirements.

And so many families are now finding it difficult to live together in the UK, barred simply because they have a low income.

Frustrations aside, Andy and I have a good case. With the preferential treatment I’ve ordered up, I should have an answer by the end of March, and I’ll be back in the country in April.

Gen will be writing a regular column for Expat Focus, detailing her experience of the visa process in the UK. Keep up with her updates here on ExpatFocus.com