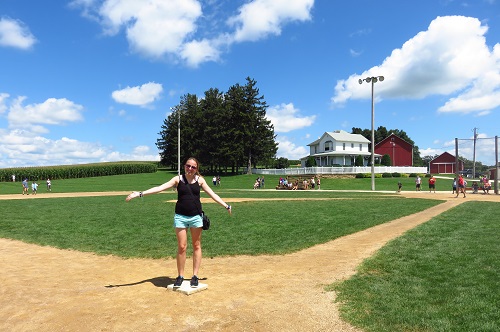 I’m Kylie, a British travel writer and blogger originally from Essex in the UK!

I moved to Iowa, USA back in August 2016.I met an American while on holiday in Jamaica and we ended up getting married (not in Jamaica!) and then went through the year long Green Card visa process

Apart from having to leave my family, it was the silly little things that ended up challenging me. Things like having to switch all my English accounts over to American or even start new ones completely (air miles, PayPal, WordPress etc). Of course I wanted a phone but it turns out a lot of American phone companies aren’t compatible with (unlocked) European iPhone 5s. It then meant I had to either buy a new phone that worked (unexpected expense) or go with a company that doesn’t actually have great signal. For now I’m with the poor signal company and kept my old phone!

There’s another Brit that lives about 10 minutes from me, we’ve met up and had dinner together which was really nice. There’s several nearby that are different nationalities.

The heat in the summer!

Being so far away from home.

Health care insurance/bills are the biggest thorn in my side, coming from a country with the National Health Service (NHS) it was a bit of a shock!

Also the lack of holiday/vacation days from work. The UK has 5 weeks off as standard but in the USA you’re lucky if you get a week off. As someone that’s travel obsessed, I took a job in a school to get round the lack of holiday days!

Even if you move from an English speaking country to another English speaking country, be prepared for culture shock! Just because there isn’t a language barrier, it doesn’t mean there won’t be other challenges. I think people around you just expect you to fit in and understand everything because it’s what they’ve been used to all their lives. They don’t always realise how different it can be for an expat!

I’m not sure what my long term future plans are, but I do know that I’m releasing a book! In December 2017 Between England and Iowa: A Year In The Life of an Emigrating Wife will be available on Amazon in Kindle format (worldwide) and paperback (US and European Amazon stores). As the title suggests, it follows my first year as an expat in the USA. The highs and lows, my travels, day to day life, the cultural differences etc! I hope it’s something that other expats will be able to relate to as well as helping other people or those that are thinking about emigrating understand the process and what it’s like, a little better!

You can keep up to date with Kylie's adventures on her blog, Between England And Iowa.