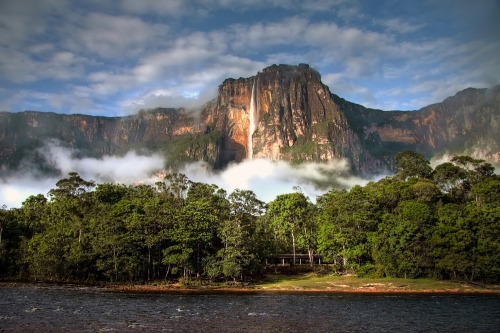 From the Andes to the Great Plains, from the topical Amazon rainforest to the grasslands, you will come across numerous captivating sights and experiences all over Venezuela. This South American country has shorelines on the North Atlantic Ocean as well as the Caribbean Sea, shares borders with Brazil, Colombia and Guyana, and is also close to other popular destinations such as Aruba, Trinidad and Tobago, and the Netherlands Antilles. Because of its natural beauty, modern infrastructure, healthcare facilities, education standards and growing economy, this nation has gained a lot of popularity with people from across the globe. Expats find it easy to settle down in this place since the local people are warm and friendly. Moreover, while Spanish is the official language, English is widely spoken and understood. Capital city Caracas is home to a huge expat population.Once you decide to move to Venezuela, you will have to get your paperwork ready as well as preparing for the actual journey and the procedure of setting up your home over there. While many travelers prefer to carry nothing more than their personal belongings such as clothes, toiletries, accessories, small gadgets and medicines, seasoned expats tend to import a lot of their furniture, electronic appliances and household items to their new homes.

However, do keep in mind that, like most other countries, Venezuela has rules and regulations around importing different products. While some of the goods you are carrying may attract a hefty duty, others may not be allowed in at all. It is therefore essential for you to understand the customs’ laws in this country before you actually move.

There are two ways in which you can bring your belongings into Venezuela. The first is carrying all your possessions with you when you arrive. Alternately, and perhaps more practically, you could choose to have all your things shipped over to you. This second method is more time consuming as it could be several weeks or days before you get all your stuff. However, it is a lot easier on the pocket, and that is why a majority of the expats opt for it.

One of the main criteria for this is that the importer has to be a foreign national who has not been a resident of Venezuela for the last six months. Moreover, your shipment has to arrive into the country no later than six months after you do. When planning, build in a buffer to take into account potential strikes and delays, as these problems are quite common in the region. Also, you will have to be present at customs with your original passport and the other required papers. The entire clearance procedure could take anywhere between five and 10 working days.

It is imperative that you have all the documents specified by the airline or the shipping company you choose. If any of the paperwork is missing, the customs department can levy heavy duties on your cargo or may even refuse to clear the goods. Here is a list of documents you will be asked for.

• Original Passport (with copies of the first and last pages)
• Packing list in original, issued by the origin agent
• Proof of residence visa
• Work permit
• Letter from employer, confirming your work contract
• Certificate of use (certificado de uso) in Spanish, issued by the Venezuelan consulate in your country of origin
• Airway bill and bill of lading (two original sets issued by the origin agent)
• Power of attorney issued and notarized in Venezuela (in case of air shipments)
• Detailed inventory in Spanish, notarized at the place of origin
• Customs form A + B (to be filled out in Venezuela)
• Declaration of value (to be filled out in Venezuela)
• Letter of authorization to the destination agent, for clearing the shipment
• Copy of the tax registration document

Remember that all shipments are subject to inspection by the officials. The keys to all lockers, trunks, suitcases and other locked containers have to be turned over to the authorities. Moreover, document requirements are very strongly enforced, and failure to comply with the regulations could result in your possessions and passports being confiscated.

The Venezuelan government does not levy any tax, duty or VAT on personal household items that have been used by the owner. You will have to present a certificate of use confirming that the goods you are importing are all at least six months old. All the items in this certificate have to match your inventory packing list, although the values should not be mentioned. In the absence of this document, you will be asked to pay import duties on your shipment. Once imported, you could be charged anywhere between five and 41 percent of the Cost, Insurance and Freight (CIF) value, along with an import tax which is one percent of the CIF and a VAT of 12 percent charged on the total of the taxes, duties and CIF value. If you do not have the amount with you, the authorities will not release your shipment.

Ensure that the origin agent lists the exact contents of each carton or box in the comprehensive inventory. Authorities do not recognize terms such as packed by owner or miscellaneous. If any of the items in the shipment are dutiable, those must be identified separately.

Keep in touch with your moving company, so that you will know the exact date your shipment is arriving into Venezuela. The custom’s entry has to be made within five days, and fines are incurred if there is a delay. If the vessel is detained by the freighter beyond a certain point, demurrage charges may also be levied, which are very high. To avoid the accrual of any additional charges due to delays, make sure that you courier the documents to a destination agent at least two weeks in advance. A copy of the airway bill or bill of lading also has to reach the agent about two working days prior to the arrival of your cargo. This allows the containers to be moved from the port into a private warehouse for customs inspection. There is usually no additional cost to the client or the carried for this transfer.

When packing your goods, it is best for you to secure them in wooden crates that cannot be broken, as theft is a common problem in such cases. Also, people often complain about their things getting badly damaged in the process of being shipped, so pack each item as carefully as you can.

The Venezuelan authorities levy no import duties on certain goods, as long as they are shipped in permissible amounts. These include clothes, shoes, accessories, books, DVDs, toiletries, cosmetics, linens and sundries for personal use. Given below is a list of additional items:

Please note that bringing in more than the permissible amounts of tobacco into the country requires a government license. If you exceed the amounts mentioned above for any of the items, import duties will be levied on those items only. Moreover, if any of your stuff is brand new, make sure that you have all their receipts and are prepared to pay an import duty. You are not likely to pay any additional duties on your furniture, electronics (only one of each type) and household appliances, as long as they have been used for at least six months.

The government has set restrictions on the import of certain items. You may have to provide a valid reason for importing such goods or may not be allowed to bring in more than a specific quantity. Given below is a list of the restricted products:

If you are not sure whether an item is restricted or unrestricted, it is best to speak with a licensed and experienced agent in Venezuela, who can provide the required guidance.

There are certain items that you cannot import into this country, no matter what the circumstances. When packing your belongings, make sure that you don’t include:

• Alcohol
• Narcotics and illegal drugs of any type
• Subversive or pornographic material
• Explosives
• Arms and ammunitions of all kinds (even those of a decorative nature, unless you have the required permits)
• Foodstuff and diapers for babies
• Chemicals and toxic products such as fungicides, fertilizers and so on
• Detergents and other household cleaning products
• Live plants and flowers
• Birds or any bird products from Chile

You may have the option of getting a car or bike shipped to Venezuela, but the procedure can be quite complicated for expats. First, bear in mind that only Venezuelans, returning residents and Diplomats are allowed to import a used vehicle. No duties are levied if the shipper has resided overseas for more than a year and has owned the vehicle for at least 11 months in its country of origin. Of course, the car should have been registered in the name of the importer. Moreover, there is a limit of one per family and the value of the automobile has to be below US$20,000. If the car exceeds that amount in value, duties of 40 percent of the CIF and an import tax of one percent of the CIF will be charged. Brand new vehicles are subject to an import duty of 50 percent of the CIF, an import tax of one percent of the CIF and a VAT of 12 percent of the total of the CIF value, taxes and duties. Owners should be aware that automobiles cannot be sold for a period of three years after being imported into Venezuela.

The documents required include:

Diplomats are also required to provide an exemption form from the treasury department if they are importing vehicles. Note that:

• All types of cars and motorcycles have to be manifested as “dangerous cargo”. This applies to everyone, including diplomats.
• Vehicles must be shipped separately from household items, and corresponding charges are levied on the import.
• The owner (who must be at least 18 years old) has to be present at the dock with a valid driver’s license.

Failure to comply with any of the stipulations mentioned above could result in the port officials as well as the government authorities levying heavy fines. Automobiles imported under a temporary permit are only valid for six months. The permit can be renewed for another six months but after that, the vehicle will have to be exported. The owner will also be required to post a bond through an insurance company to cover the value of the duties and must pay one percent import tax.

It is possible to import certain types of pets into Venezuela too. However, domesticated animals may be subject to quarantine and inspection by the department of agriculture when they enter the country. Unfortunately, these facilities are only provided at select airports. The owner will also be required to present the required health certificates at the time of import. Exotic animals are not allowed, unless the owner has a government license and a permit from the department of agriculture.