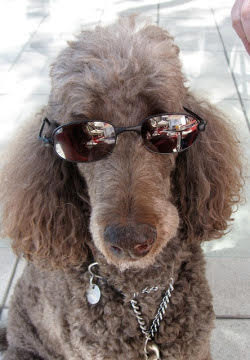 My name is Candice and I am from New York. Originally from North Carolina.

My husband retired early from his work in NY… we moved to Portland Oregon and one day, he said to me, How would you like to go to Buenos Aires?I was shocked, we had never discussed it before… but if he wanted to go, so would I! He was a true “adventurer” having lived in India and Europe etc.
We were there for about 2 weeks and every day we were enchanted with the place and the people. When we got back to the US, maybe a few weeks later, my husband asked me if I would want to live in Buenos Aires. I asked him to get the suitcases down for me and call a mover.

Our dog. He was the only challenge. All we had to do was pack. And the movers did that! But we had to fly to Los Angeles California from Oregon to get paperwork so the dog could fly and enter Argentina. Then there was the matter of a very long flight (2 flights actually) from Oregon to Argentina.
Thanks to American Airlines, he was allowed to fly in the cabin with us from Oregon to Dallas. Then they put him in a very large crate (but with no blanket, water etc) and put him in the special area in the hold where the pilots could see him and where precious cargo belonged, a priceless violin for example. And a Priceless Pup.

Once we got to Buenos Aires, everything was easy. The people were nice, they all wanted to pet the dog and we had arranged for a car and an apartment to be waiting. The first week though, we stayed at the Art Suites Hotel on Azcuenega in Recoleta. That is the hotel where we stayed on our holiday. The owners are so great and the rooms were fabulous, it was a no brainer about where to go when we arrived.

Yes, from all over. There are many Embassies in that neighborhood and it has a few well known landmarks/sightseeing areas and fabulous parks. so when foreigners visit, that is usually the place they see first and where most want to live…

Life is easy if you are an expat and can afford to live there. You have no worries other than the occasional need to renew a paper for the Embassy. We set to work right away on getting our Permanent Citizen papers, it took years… and was not cheap. But it was worth it.

The one and only thing that we both had issues with was the distance for visitors and cost of flying. We had family visits a few times but it is just so far away and costly getting there. The first couple of years we had to renew our visas but after we finally got our Permanent Visas, we were free to just be there and enjoy it as did any other resident.

Buenos Aires has a lot of inherited habits that have come to them over the centuries… they still have tea in the afternoons, there is the South American culture mixed with European and throw in a dash of Asian and the North Americans who call BA their home… my husband had an uncle who had immigrated from Europe to South America many many years ago, so we had Argentinian cousins if we needed someone to call family but basically, aside from the language, the people are like people everywhere who are warm and kind and have a good sense of humor… and generally good manners.

Be open to everything. Be patient. Be polite. Don’t get frustrated and feel like it is not going to work. Stop and take a deep breath, sit in a park and people watch, listen to the music… remind yourself of why you would want to live here. Perhaps it is not a good enough reason but most likely, there are a million good reasons to want to live in Buenos Aires.

We flew back to the US to visit family and while in the US, my husband died suddenly. I am just now getting back to thinking about what to do next and where to do it. I am lucky. I have choices. A small flat in Recoleta is probably the choice I will make.

You can keep up to date with Candice's adventures on her blog, Notes From A Broad.