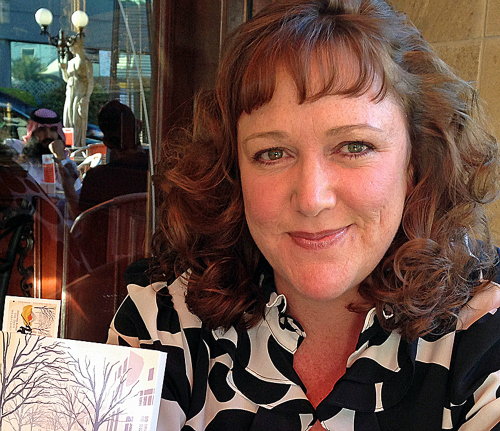 I’m an American writer living in a peaceful bush suburb north of Brisbane, Australia. This is after 30 years in the United States, a year in Germany, five years in Holland, and four years in Singapore. I grew up on the shore of Lake Erie, west of Cleveland, Ohio. As a proud Buckeye, I graduated from Ohio State University in 1994.As a teenager, I dreamed of Europe. In 2000, I joined a global technology firm to search for an open door. In September 2001, the door opened. I was asked to go to Germany. Unexpected romance turned a one-year assignment in Heidelberg into six years in Europe. My job took me to the Netherlands, France, Belgium, Italy, Denmark, the UK, and South Africa. My intense curiosity took me everywhere else.

I relocated to Singapore in 2007 and did my best to navigate the complexities of Asian culture. It was there that the passion to write about my experiences took hold. I began my memoir in 2009, working as an IT contractor. With the vast diversity of Southeast Asia at my feet, it was a natural step to begin travel writing. The Guide magazine in Viet Nam published five of my destination pieces in 2010 and 2011. Travel writing went from hobby to addiction as I explored China, Thailand, Malaysia, Australia, New Zealand, Cambodia, Laos, Hong Kong, & Borneo.

In 2011, I landed in Australia where I initially returned to consulting. In late 2012, I made the leap into writing full time. In 2013, my first web site was launched and I became a full member of the Australian Society of Authors. My first memoir, The Devil Wears Clogs, was published in 2014.

Currently, I’m working on the second book in my memoir series, Singapore Salvation, which will be published at the end of 2015. I’m also taking copious notes about the wonders (and oddities!) of Australian life for the final book in my series. In February 2015, I launched my second web site, www.WorldwisePublications.com, to harness the collective knowledge of my international network and to support young professionals either working overseas or those with ambition to do so.

My firm asked me to relocate to Heidelberg, Germany about three days after September 11th, 2001 because of my experience with Customer Relationship Management software and projects. I stayed in Germany for one year, then moved to Amsterdam. I remained in the Netherlands for five years.

Many! So many that I have written one memoir about the experience, The Devil Wears Clogs, and have plans for two more. As an American, I firmly believed that my way was the “right” way to do things at work. The Dutch and Germans quickly knocked that out of me. The second book, Singapore Salvation, will be published at the end of this year. I write a great deal about navigating various cultures on my web site.

Yes, expats have been in demand in Brisbane, Australia as it is a rapidly growing area with many IT projects needed to support various industries (mining, healthcare, city administration, etc).

There is so much to love that it will be hard to create a comprehensive list. I love that Queensland has hundreds of islands to explore, including those of the Great Barrier Reef. I love that we have around 400 gorgeous national parks to get away from it all, so you not only have stunning ocean views, but mountains and rivers too. I adore living in a semi-rural area with wild parrots, koalas, and an acre and a half of palm trees and tropical plants for company. I’m slightly less enthusiastic about the pythons and giant spiders that come with that, but I’m adjusting! My favorite thing is four-wheel driving and having picnics on the beach.

The inability to attend all the milestones of my friends and family. Things like weddings, anniversaries, and birthdays have to be celebrated by Skype and FaceTime rather than in person. I also hate that I can’t be there just to give a friend a hug during the difficult times that life delivers.

Americans tend to be exceptionally focused on their work life. Australians, while they do work hard, put more emphasis on enjoying life.

Listen more than you speak.

While I love living in Australia, my fourth continent and fifth country, I never really know what will be coming next. I’d love to spend more time in South America and would definitely return to Asia.

Jennifer's first memoir, The Devil Wears Clogs, is available now on Amazon and Barnes & Noble. Her second memoir, Singapore Salvation, will be available in December of 2015. Her third, The Python in My Driveway, is scheduled for 2016. You can keep up to date with Jennifer's adventures on her websites, Worldwise Publications and Jennifer's Jnana, or through her Facebook page.