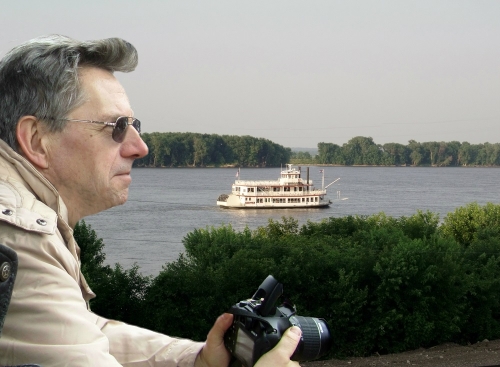 Over the last few months I have had occasion to drive between St Louis, Chicago and Northern Illinois quite regularly, and interstate travelling makes it easy to do these fairly long distances, much easier than equivalent distances back in the UK. One thing that is noticeable as you travel, not just on these routes, but on most of the Interstates I’ve ever driven on, is that at almost every major intersection have grown up little communities of businesses, whose sole reason for being there is to serve the traveler. This was true even back in the days of the now famous “Main Street of America”, Route 66, brought travelers through what had been quiet backwaters. The interstates now bypass those towns, but the tradition continues.A lot of the places to eat you see as you travel are large chains of restaurants that have grown up over the years to meet consumer demand. I well remember the first time I stopped at a “Cracker Barrel Old Country Store” in upstate New York, and how charmed I was by the rocking chairs outside and by the shop selling cute items, a lot of them seasonal. When I got to the restaurant, it was great to see a real fire going (it was winter) and to study the menu with its American country-style foods. The second time I stopped at one –I think I was in Massachusetts – I was still charmed, but maybe less so. It was exactly the same as the New York location, except for the names on the university tee-shirts it was selling.

Now, don’t get me wrong, I totally get the concept of Standard Customer Experience and understand the appeal to the consumer. If I’m driving and want a stop and eat, I know exactly what any Cracker Barrel will have to offer, what it will look like, even where the bathrooms will be. Sometimes that is exactly what I need, just a break and a rest and on my way again. But sometimes it’s good to get away from the expected and be challenged, even if only slightly, by the experience.

I will stop at the chain restaurants, but I have come to see that there are other options too, without needing to do a lot of investigation and research. I came across one of these a while ago when I was driving along one interstate and came to the sign for Delaney’s Family Restaurant in Oglesby, Illinois. It could have been anything, but I had time to stop, and so I followed the signs and found a relatively small restaurant, with a menu but also a buffet. I talked to the owner and found that they had been in business since 1992. As I sat at my table, other people came in, and the owner greeted some of them by name, sat them down, and brought them their drink without asking what it was. Locals I assumed, and what better recommendation than that the locals eat there.

On another occasion, I didn’t want to eat but did need a break, when I came to a sign announcing that the next intersection was home to the Grain Elevator Museum. I was intrigued, and also I was unsure what it meant; was it a museum about grain elevators, or one in a grain elevator? Taking the exit, I found I was in the town of Atlanta, Illinois, which proudly boasts that it was the mid-way point on Route 66 between Chicago and St Louis. Unfortunately the museum was closed when I went there, but I found out that it is a museum in a grain elevator, dealing with agriculture, transportation and commerce at the turn of the 20th century – I might stop again one day when it is open.

Having not been able to go into the museum, I stopped to walk around and found a 19-foot statue of a man holding a hot dog. Once a common sight along old Route 66, these fiberglass statues came in many guises, and this one came from a restaurant in the town of Cicero, IL, where it welcomed guests from 1965 to 2003. I only walked one block of the town, but it was a fascinating block, full of the history of Route 66. Many of the brick buildings were adorned with the painted signage that was a feature of that era, and there were two museums and restaurants.

Another way of breaking up a trip are the rest areas that are along most of the interstates. Most people use these just for the bathrooms and the vending machines, but occasionally I have found other things of interest. On stopping at one rest area, I was intrigued to note a made up track leading into the woods behind the area, and following it soon found myself climbing a steep incline. At the top of the hill was an observation tower, and climbing the steps there gave me a view over the treetops and into the valley below. To this day, I have no idea why that tower was there.

Driving on the interstate can be monotonous, but it can you never know what you will find when you take an exit.