My name is Kris Peter, and I am a Canadian living in Perth, Western Australia.

I am married, and my husband is Australian, born in Zimbabwe. We have two children; our son is three years old, and our daughter is ten months old. My professional background in Australia has included Outdoor Experiential Education, Community Development, and Mental Health.

Currently, I am on maternity leave and using the opportunity to start my online blog and business, Healthy On The Go. The blog aims to reach other families like ours; families that are busy and time poor, but value health, nutrition, being active, adventure, travel, exploring. In particular, I am looking to address these topics in the context of being an expat in Australia and how parenthood so far has been my biggest challenge. With family support overseas, we need to be that bit more creative, and that bit more resourceful when it comes to providing the life we want for our children.


Where, when, and why did you move abroad?

I came to Australia for six months - it will be 11 years ago as of January 5th, 2018! I was working for a company named Outward Bound Canada as an outdoor instructor, leading wilderness trips for youth and adults in the Canadian wilderness. The company offered me the opportunity to participate in an exchange with our school in Australia. I had been planning to accept a job offer in Malaysia, in a similar field. However, the proposal to come to Australia included my flights, which became the deciding factor!

I arrived in Canberra in what was the tail end of the drought. It was burnt and brown and 40+ degrees. I most certainly questioned why I had signed up! Not long after arriving I boarded a plane to Perth, where we hopped on a train to Bunbury, and then a bus to Walpole. I had no idea where I was but sure of one thing - I had arrived in the most beautiful place I had ever seen. Beaches on the Southern Ocean are incredible, and the giant Tinglewood trees are awe-inspiring.

I had a fantastic experience at Outward Bound Australia, that brought me all over the country. I walked from just south of Canberra all the way to the Bass Strait. I paddled the Snowy River. And I explored the coast of the Southern Ocean. When my time there came to an end due to a recurring back injury, I decided to enroll at the University of Western Australia to study my Masters of Education bringing me back to Perth.

At UWA I was in a program with a lot of international students. However most of these students were only in Australia to study, they did not intend on staying. I found it difficult to meet people who lived in Perth, and were planning to still be there when the term ended. I was also struggling to find people who were interested in the outdoor activities for which I was passionate.

I realised I would have to do something if I wanted to expand my social circle and find some friends! After a bit of searching online, I discovered that UWA had an Outdoor Club. They featured activities like rock climbing and kayaking, both of which appealed to me, as well as several social events. I decided to start with joining the rock climbing group at the local climbing gym. They met every Wednesday night. Showing up the first time and looking for the person I was instructed to find was difficult. I almost turned away at the door.

For the first few weeks, I showed up, climbed with whoever I was assigned to, and went home. After I became a bit more friendly with the other climbers, I started joining them for drinks at a local pub afterwards. After several weeks of this getting to know them better, I started getting invited to go outdoor climbing on the weekend, as well as along with other activities like kayaking and windsurfing.

Joining the Outdoor Club and making friends there was the turning point in my experience, and quite literally why I am still in Perth today. After finishing up at UWA, I gave myself three months to find a job. It was 2009, and I was able to get a 457 visa (employer-sponsored) visa and a job I loved in the Community Development not-for-profit sector.

It was through the Outdoor Club that I met my friends, but specifically my Australian friends. The Club was full of other expats but represented a mix of locals as well. Both from Perth and from over east. I found it was easy to make friends with other expats, but much more difficult to get to know the West Australians. I think once my intention to stay in Perth became clear, people were more open to letting me in.

It was through the Club that I met all of the people who form my closest friendship group to this day. All three of my bridesmaids were women whom I met through the club. And while rock climbing with friends from the Club I met my husband. We married in November of 2013 in Perth, in front of an almost exclusively West Australian group of friends. It was on my wedding day that I realized on my own I had created a life and family for myself on the other side of the world.

The move itself was not challenging for me, as it was a slow progression. When I first arrived in Australia, it was only for six months, and I was primarily travelling like a backpacker. Over the ensuing decade, I have slowly filtered my things from Canada to Perth.


How did you find somewhere to live?

Finding a rental in Perth was very challenging in 2009. I was lucky to have one friend who was a local and looking for a flatmate. Back then, applying for a rental was competitive, and you had to put down a large deposit just to apply. However, since the decline of the boom in WA, the rental market has opened up considerably. Prices have dropped significantly, and it is no longer as competitive. Securing a rental would not be difficult. However, a bond is still required, which is a month's rent. 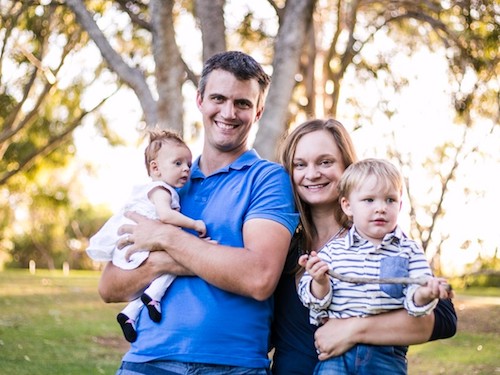 Australia is bizarre regarding its rentals - tenants pay by the week instead of by the month. The standard rental agreements are also written to protect the landlord more so then the tenant. An inspection is conducted every three months, and they can be somewhat invasive (you might get told to do more dusting of the skirting boards!).

There are a lot of expats in Perth, as well as transplants from the eastern States. There is a particularly high concentration from Ireland and the UK, as well as South Africa and Zimbabwe.

My relationship with the locals is excellent! I have made a considerable effort to make sure I am connected to my community, both for myself but also for my kids. I do so by joining local community groups and volunteering. Now that I have children, I am on the committee for both our Playgroups and our Toy Library. Joining is a fantastic way to get to know locals, as well as how you're interested in being connected to the community.

The lifestyle in Perth is fantastic. The weather is beautiful and overall Perth is a very relaxed environment. There are good public schools, and we live somewhere I am confident my children can attend the local neighbourhood school. Perth is also a very safe place to live.

Recreation and community spaces in Perth are unparalleled. The beach is all public space, as is most of the river access. There are parks and playgrounds everywhere, with shade sails covering to protect from the sun.

Being a Canadian in Australia is interesting. The cultures are so similar, it is easy to make the mistake and think you are at home. But you are not.

For me, the most significant cultural difference I have experienced is the attitude towards sexism, racism, and language. Firstly, I want to say not all Australians are sexist or racist. They do get a bad reputation, and there are reasons for that. A lot comes from their language. In Canada, cultural appropriateness and awareness is much more standard. Not perfect by any means, but more present then you would realize until you live somewhere like Australia. However many Australians would (and do) argue that we North Americans are overly sensitive to the words we use and that they are just ‘taking the piss.’ And it’s true - in Australia, many serious topics are often addressed by joking about them.


What do you think of the food and drink in your new country? What you your particular likes or dislikes?

There is a substantial Asian influence on food and culture in Perth - so the food is fantastic! The quality of food available is very high as produce can be grown year round. However, food is costly. Especially when eating out.

The number one tip I would give to any expat looking to move to Perth is get involved in the local community. Australians have a lot of respect for people who are willing to ‘have a go’ and get involved. Volunteering is an excellent way to do that, as it helps you develop a meaningful relationship, as well as shows others you want to contribute. While I still have several expat friends, I found making an effort to create relations with the West Aussies has been what has paid off the most! They are harder to get to know well, but once you do that they are worth it!

The plans for my future and my family are to stay in Perth but be able to travel regularly back to Canada. As my children get older, it becomes increasingly important to me to keep the connection to my family, and the place I am grew up. As an expat, it can be very difficult to be fully committed to life and career overseas, as you never know when you might need to go home, or want to move back. The challenge for me as an expat with a family is not that we live far away, but the uncertainty of when the next trip home will be. It was this motivating factor that prompted me to start Healthy On The Go. It will provide me with a platform to work online, from anywhere. And my goal is to support other expat families to do the same.


You can keep up to date with Kris' adventures on her blog, Healthy On The Go, and on Facebook.