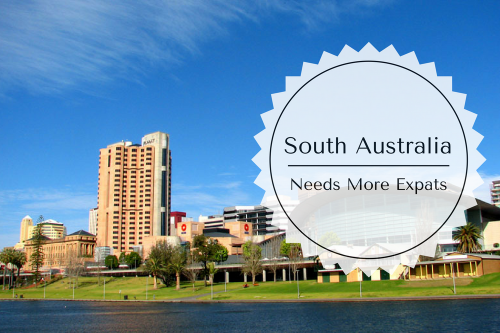 South Australia is an Australian state that shares its borders with all the other Australian mainland states and the Northern Territory, surrounded by Western Australia to the West, the Northern Territory to the North, Queensland to the Northeast, New South Wales to the East, Victoria to the Southeast, and the Great Australian Bight to the South. Often referred to as SA (as well as the Festival State and the Wine State), this region primarily covers some of the driest parts of the continent.South Australia is the 4th largest of all Australia’s states and territories, with a total area of 379,725 sq. miles (983,482 sq. kilometers) and a population of 1.7 million people. It is the most highly centralized state in the country in terms of its population, as over 1.2 million people – 75% of the population – live in Adelaide (the capital city) or its environs. The rest of the residents are settled in the fertile areas on the southeast coast as well as the River Murray. The other population centers within this state are therefore much smaller. In terms of population size, South Australia ranks fifth among the six states and two national territories, as it is home to no more than 8% of the country’s total population.

These statistics have been causing some concern to state government officials. A recent survey conducted by the South Australian Center for Economics Studies at the Adelaide University showed that there has been a rather slow rate of growth in the local population. In fact, with a fast aging population, the growth rate of South Australia’s workforce is almost 50% slower than the rest of the nation.

The report further highlighted that in the last three decades up to 2014, the state’s population grew by 350,000, which is close to 27%. During the same period, the population growth rate across the entire nation touched about 55%.

Unfortunately, the level of employment among the youth here is also at a lower level today than it was back in the early ‘80s. That was the time when South Australia went through a serious economic crisis after the collapse of the State Bank. It was during this period that many skilled professionals moved to other places for better career prospects. Since then, the number of younger working people has continued to dwindle gradually. In 2009 and 2010, an estimated total of 26,300 South Australians migrated to other places. Of this, 50% were between 20 and 39. On the other hand, only around 9,000 people arrived in the region from other places, and 35% were from overseas.

The state is therefore in dire need of skilled professionals in order to revive its flagging economy. According to experts from the South Australia Center for Economic Studies, the government can fulfill this requirement by promoting skilled immigration strongly. They further add that skilled migration is a very important option for the entire state because while the foreigners would benefit from their employment in this state, the local population would also, as a whole, benefit from their contribution to the economy.

The Executive Director at the South Australia Center for Economic Studies, Michael O’Neil, believes that the state should also take extra steps to make vocational courses and higher studies more affordable for local and foreign students. He claims that the authorities are trying to transform the country’s economy from old manufacturing to new, advanced manufacturing, as well as renewable resources; these are areas of specialization for the younger generation. Unfortunately, in the current situation, the state is losing out on this population.

In addition to immigrants and local migrants, there is no denying the fact that South Australia needs more skilled expats too. To streamline things for potential foreign workers, the Government of South Australia has compiled a State Occupation List and Supplementary Skilled List. If you think you could be one of the skilled workers that Australia needs, this is a useful list to look at.

The occupations mentioned in the Consolidated Skilled Occupation List are considered “high demand” across the state. In order to seek state nomination under the South Australian General Skilled Migration Program, your occupation must feature under one of these lists. The broad categories of occupations on this list are:

Take a look at the Australian government’s website to find out exactly which positions are open under each category on the Consolidated Skilled Occupation List.

Of course, even if your occupation is mentioned on the list, there is no guarantee that you will get a job. It is necessary for you to meet a minimum skill level and also compete with other applicants who are interested in the same position. Moreover, you may require additional registration or licensing in order to work in South Australia.

This reflects all those occupations available on the Commonwealth’s Consolidated Sponsored Occupation List, which may not be mentioned in the State Occupation List. These include:

A number of open positions have been listed under each category. To view the detailed list, log on to the site mentioned above.

These are available to limited applicants only. In order to qualify, you need to demonstrate employment outcomes or family links to support human capital as well as the economic objectives of South Australia’s skilled migrant program participation. This list is mainly available to people who meet certain criteria.

The government has been inviting applications from skilled and business migrants. The authorities have provided a list of services online, which include assistance in seeking employment, finding a migration agent, viewing occupations’ availability and registering for an information session.

If you are interested in migrating to South Australia as a skilled worker, it is important for you to meet certain nomination requirements, which include:

Occupation – Check if your occupation has been listed as “available” on the State Nominated Occupation List or the Supplementary list. You need to meet the eligibility criteria

Work Experience – Make sure that you have at least 1 year’s skilled work experience within the last 3 years.

Commitment – You are required to commit to living and working in this state for a period of 2 years from the time you arrive.

You will be required to submit certain documents to initiate the migration process. Below is a summary of the paperwork required.

For chain migration, applicants have to submit all the documents mentioned above, along with:

Why move to South Australia?

There are several reasons why moving to South Australia could be beneficial to you and your family. Apart from the fact that Adelaide is often ranked as one of the most livable cities in the world, it is also arguably one of the cheapest mainland state capitals of Australia to live in. For example, rents in this city are almost 50% cheaper than they are in Sydney and Melbourne. Below are some of the other important reasons why families choose Adelaide over other Australian cities.

Relaxed lifestyle – Residents of Adelaide say that a strong feeling of community exists in the city. The locals are known to be friendly and welcoming. The pace of life across Adelaide is quite moderate. The lack of traffic also contributes to this feeling.

Low crime rate – Decades ago, Adelaide was given the moniker, “the murder capital of the world” after a series of unsolved cases. However, things have changed a lot since then. In 2012, crime rates in the city fell drastically and have been on a steady decline since then. According to a recent survey conducted for the Suncorp Bank Family Friendly City Report, Adelaide ranks as the safest city in Australia. In the last year the city reported only 2,364 incidents per 100,000 residents.

Mediterranean climate – Adelaide has warm temperatures throughout the year. In general, the weather remains sunny though the area receives a fair amount of rainfall during the winter months. The temperate climate gives people the opportunity to spend more time outdoors.

Education system – The Government of South Australia generally markets Adelaide as the Learning City. Students (local and expat) have a wide range of renowned schools, colleges and universities to choose from. The city’s public education sector is of good quality too. Some of the most popular educational institutes in Adelaide are Carnegie Mellon & Cranfield Universities, University College of London and the Royal Institution of Adelaide.

Things to see and do – There are more restaurants and wineries per capita in Adelaide than in any other city in Australia. When it comes to the cultural scene, this city has a lot to offer its residents, from the major festivals to impromptu street performances. Some of the most popular cultural events hosted are the Adelaide Festival of Ideas, Tasting Australia and the Royal Adelaide Show. Every year performing artists such as jugglers, magicians and musicians gather at the Rundle Mall and put on a show for onlookers.

Do bear in mind that not everyone who is eligible to move to South Australia will find it easy to get a job in the state, even if their occupations are listed in the State Skilled or Supplementary Skilled lists. You will have to go through rigorous selections rounds in which you compete with other applicants that may be just as qualified and well-experienced as you. For more information and personal guidance, it may be a good idea to get in touch with a local agent who is experienced in dealing with migrations for South Australia.