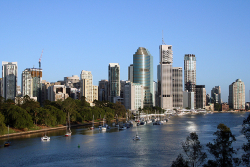 I was only 4 years old when the 1974 floods swept through Queensland and I really can’t remember a lot about the actual event, apart from the fact that there were a lot of the round plastic garbage cans (common at the time) floating around the streets. Following that time, everyone just rolled up their sleeves and got on with the clean up. There was a real no nonsense approach to getting things back to normal. Yes, it was devastating to many, but people realised that the only thing to do was to fix matters and move on.

Since 1974 the population growth in South East Queensland has been enormous, as has improvements to infrastructure. Things have been ticking along nicely despite the GFC. In fact, with the mining industry booming here we have been expecting big things in Queensland over the next few years.The first images of the 2011 floods flashed onto our television screens on Monday last week when footage of tsunami like waves were seen pushing cars like boats down rapidly flowing rivers that were, minutes before, Toowoomba streets. Toowoomba is a regional Queensland town, approximately 100kms West of Brisbane, and high up on a mountain. Much of the devastation occurred in this area along with the Lockyer Valley down the hill from Toowoomba. It has been a very sad time for many of these Queenslanders.

Back in Brisbane on Wednesday it was evident the Brisbane River was going to flood, due to the fact that rainfall levels had been beyond expectations for weeks on end, and our dams were well over ideal capacity levels. People in low-lying areas were told to expect major flooding and prepare by removing their possessions and evacuating their homes.

Whilst the flooding affected 11,900 homes many of these were situated on the banks of the Brisbane River or in close proximity. The flood water has since subsided, in the majority of these areas, quite quickly and the big cleanup has been supported by many volunteers from surrounding regions like the Gold Coast and Sunshine Coast, who were unaffected by flooding.

The Australian Bureau of Statistics estimates the population of Brisbane, as at 30 June 2009, to be in the vicinity of 2 million people. As at the 2006 Census, Brisbane’s number of households was 641,039. This indicates only a very small portion of Brisbane homes were flooded in 2011. This may come as quite a surprise to those overseas residents who heard about the flood situation via the media. Yes it has been devastating to those whose homes and families were affected and there have been major repercussions across Brisbane and the rest of Queensland in terms of power supply, damage to businesses, ruined crops, transport logistics, supply of some food items, but there were also many residents whose homes and businesses did not experience any flooding at all.

Another important factor to note is that there have been only 3 major floods since colonisation. The first occurred in 1893, followed a long time after, by the 1974 flood. In 1974 major flooding was a result of many weeks of heavy rain culminating in Cyclone Wanda hitting the Queensland coast. At that time too, Brisbane did not have the number of dams it has today.

Arising from the flood it is apparent that there will be some short to medium term upward pressure on the cost of renting property in Brisbane. Not only will there be flood affected residents seeking temporary accommodation whilst homes are being repaired but there was already evidence that many people are choosing to rent due to affordability. Coinciding with this is school leavers and university students also seeking accommodation ready to start new jobs and university courses in Brisbane. This will create a shortfall in available rental properties thus pushing prices beyond previous estimates.

For anyone considering purchasing property in Brisbane for either owner occupier or investment purposes it is still very much a buyers market. Many vendors, who have had their homes on the market for some time, are being forced to drop prices to obtain contracts on their homes. Investors, who are looking to purchase, have the added incentive of better rental returns due to supply shortfalls.

In addition, the economy may very well receive a kick along as rebuilding will boost the under performing construction sector. More jobs and more disposable income may in turn assist in improving the property market in the long term.

There are a few checks you should undertake if purchasing property in Brisbane. They would include checking the council flood maps so you have an understanding of the affect of any major flooding on the property. Furthermore, obtaining relevant flood insurance would also be highly recommended if you are purchasing in an area which has been known to flood. For those who are adequately insured, the devastation of the flooding will not be as great.

Brisbane is still a great place to live. It is possible that our state will be an even better place to live as people have displayed such determination and strength and in may cases selflessness.

The good old Aussie sense of humour was out in full force when in one newspaper I read that someone had been to Suncorp Stadium, which was like an Olympic swimming pool during the flood, and placed floaties and goggles on King Wally (legendary rugby league player – Wally Lewis). We all had a chuckle over that one!

Tracie Hocart lives and works in South East QLD with her husband Damien (a Certified Practicing Valuer) and young family. Tracie and Damien own and operate Residential Property Solutions assisting home buyers and investors locate the right property, in the right location, at the right price.