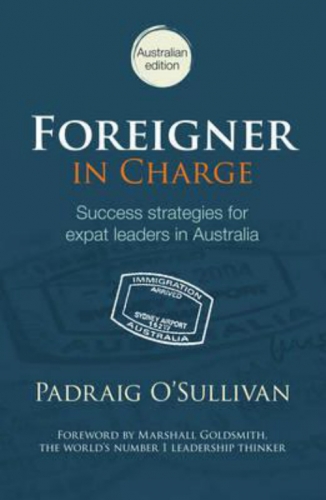 Foreigner In Charge is the first book in a series that will focus on various expat destinations. This one looks at Australia – one of the most popular expat choices – and the challenges and opportunities faced by managers who move there to further their careers.

One of the best things about the book is its realistic outlook. Right from the start, it explains that the expat life isn’t for everyone, and that not all managers will enjoy working in Australia specifically.This doesn’t intuitively seem like the best way to start a book about how to be an expat manager. But contained within this anecdote, and the others you will find scattered throughout, are gems of wisdom that will help expat managers to understand how to lead an Australian team properly.

The book is set up in such a way as to include a general overview about being a manager in a new country – any new country – and then to move on to the specifics of Australian team management.

One of the main pitfalls of expats who move abroad to manage teams is that they assume that whatever worked in their old country will also work in their new one. But expat life brings multiple surprises, and even if you’re moving to a country which shares your native language, it doesn’t necessarily mean you’ll immediately get along well there.

The UK, for example, has quite a hierarchical management structure. While direct reports on the whole are allowed to question decisions if they feel there is a good reason for it, ultimately what the boss says goes. In the US this is even more pronounced; people work very long days and are rarely away from their business emails. In Israel, where the manager mentioned at the beginning of the book had previously run a team, the structure is very “top-down”, and employees do not question what they are told to do.

Australia is different. People will work hard, and they will do what has to be done, but generally they will not be found working excessive amounts of overtime. Managers are expected to prove their worth when they join a team, rather than simply being obeyed without question.

As a historically quite isolated place due to its location and nature as an island, Australia has had to build up an excellent management culture, and this makes them suspicious of expat managers coming in from elsewhere. It can also be a cause for cynicism on the part of employees: being an English-speaking country with a Westernised culture, Australia tends to be one of the top destinations for expat managers on their first assignments. This means that a country that is rich in management skills of its own often ends up with new, relatively untrained expat managers who, at least initially, perhaps do not match up to the standards Australians generally expect.

Foreigner In Charge isn’t just about management anecdotes and notes about the country, though. There are step-by-step instructions on how to help yourself to become a better manager, and various tried and tested methods which are laid out neatly and concisely throughout the book.

The use of bullet points and numbered lists is helpful, as it breaks things down for the reader and makes it easy to pick out the salient points of each chapter.

The chapter on ‘Transition Overload’ guides the reader step by step through various things that can go wrong after their move, refusing to shy away even from touchier subjects such as family values and gender differences in the workplace. Once again the honest writing style pays off and the chapter makes a useful addition to an already practical guide.

It’s not all about the challenges, though. The description of the culture, both in business and in general, was such that it painted an accurate picture of both the good and the bad, which of course can be found anywhere. By the end of the book I was scribbling things in the margin like “I might have to move to Australia” and “Maybe in ten years’ time?”

The PALDER framework plays a large part in the book’s structure and provides a useful method for breaking down the expat experience into several steps, rather than making it sound like one huge challenge that has to be overcome.

In the middle of the book a few pages are devoted to examples of interview questions. This is doubly handy as an expat manager, as it gives an idea of the kinds of questions you might be asked before making the transition, but also provides some ideas about what to ask potential employees once you’re there.

The ‘Look, Listen and Learn Phase’ chapter is fantastically useful, especially for those who might be feeling a little overwhelmed by their new roles and countries. It guides the reader directly through the elements they should be taking into consideration, both in terms of business – understanding your role, your boss, markets and customers – and also in the personal sphere: understanding and communicating with your peer group.

Towards the end of the book, there is a table of ‘Cultural and behavioural issues’ which includes some common misconceptions and points of confusion between expat managers and their employees. Covering such subjects as urgency, discipline, accountability and innovation, it is certainly worth reading this section before you start your management journey, even if you don’t have time to read the whole book.

Foreigner In Charge is the kind of book you can dip in and out of, but it also reads easily from cover to cover and is nicely broken up with its stories and straightforward layout. The ‘Resources’ section at the end provides further reading for anyone who wants more information about moving to Australia.

Overall, I’d certainly recommend this book, not just for those moving to Australia as managers, but to anyone who is considering the next step on their expat journey.

Foreigner In Charge is out now and available to buy here.