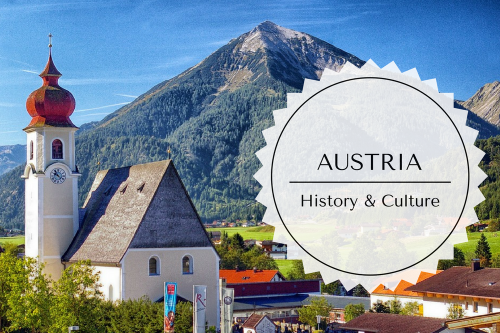 Austrian culture is often mistaken for that of its neighbour Germany’s, a faux pas that expats living in the region should be careful not to make. With German being the official language of Austria, some of the country’s literature, art and even people can be (and often are) wrongly labeled by outsiders.Austrians are quite proud of their nation’s rich history, traditions and cultural heritage. Over the past few centuries Austria has enriched the world with the work of famous writers, composers, philosophers and scientists – from Sigmund Freud to Christian Doppler and Erwin Schrödinger – each of whom left a lasting mark on their respective fields.

A large part of the landlocked country is a mountainous Alpine region and about a quarter of the land is flat. The capital and largest city, Vienna, lies in the north-eastern lowlands on the River Danube. The five biggest cities of Vienna, Graz, Linz, Salzburg and Innsbruck house approximately a third of the country’s population, while the rest inhabit a vast rural countryside. Austria’s total population of close to 9 million people benefits from a modern, efficiently-run infrastructure that boasts of excellent systems for transport, healthcare and housing, along with a modest cost of living.

If you’ve recently moved to Austria or plan to do so in the near future, here’s an opportunity to familiarize yourself with the country’s rich history and culture. Let’s take a closer look at some of the notable periods in Austria’s history and the significant cultural aspects that expats might want to explore further.

The south-central European land which is today Austria has been ripe for civilisation ever since prehistoric times. The fertile Danube Valley plains and lush Alpine valleys rich in mineral deposits allowed populations to prosper in the region. From around 400 BC, Celtic tribes from Western Europe flourished here before the area was conquered by the Romans at the end of the 1st century BC.

The Celtic kingdom of Noricum was absorbed by the Roman Empire and became an imperial province. The Romans ruled this region for almost 500 years, building roads and establishing important settlements and towns such as Vindobona (Vienna) and Carnuntum in Pannonia (Lower Austria today). The impressive remains of Carnuntum have been preserved in an archeological park and are worth a visit for their historical significance.

The Romans eventually yielded to an onslaught of tribal invasions and were driven out of their once-thriving cities. Control of the region passed through various migrating tribes of Bavarians, Slavs and Avars amongst others, until it was conquered by Charlemagne, King of the Franks in the 8th century.

In 976, the administration of this territory which was then known as marchia Orientalis (Eastern March), was entrusted to the House of Babenberg, a Bavarian noble dynasty. It was in 996 that the word Austria (Österreich in German) was recorded for the first time, written as ‘Ostarrîchi’ in reference to the Babenberg’s territory. Over the next couple of centuries, the Babenbergs grew in power and extended their dominion, becoming one of the Empire’s most important families. In 1156, Austria was elevated to the status of a Duchy and so bestowed with significant privileges by the Holy Roman Emperor, while its ruler became a Duke. Also in the 12th century, Duke Henry II shifted his family’s residence from Klosterneuburg to Vienna, which has remained the country’s capital and centre of power ever since. Impressive structures built at the time such as the Cathedral of Saint Stephan and the Schottenstift monastery (which has a statue of Henry II in its courtyard) are still standing in Vienna to this day.

The last Babaneberg heir, Friedrich II, died in 1246 and the region was seized briefly by Ottokar II, a Bohemian King. In 1278 Rudolf I of Germany defeated Ottokar II in the Battle on the Marchfeld, which was one of the most immense knight battles of the Middle Ages. Rudolf I assumed control of the Austrian lands and began the prosperous age of the House of Habsburg, which continued for over 600 years until World War I.

The Habsburgs expanded their power through a series of strategically planned marriages and built a great Central European empire over the next few generations. They extended their vast territory to include Burgundy, the Netherlands, Spain, Bohemia and Hungary as well. In the 16th and 17th centuries they faced a powerful threat from the Ottoman Empire, who had to be fought back twice from the gates of Vienna (in 1529 and 1683). Despite the unsuccessful Turkish sieges, the Austrian Empire continued to expand and wield increasing influence in Europe during this time.
19th and 20th Centuries

At the end of the 18th century, Austria was warring with revolutionary France and was twice defeated by Napoleon. The Holy Roman Empire was dissolved in 1806 following the Napoleonic wars and the Emperor at the time, Francis II, renounced the Roman Imperial Crown. Two years prior, in 1804, he had declared Austria an Empire.

Following Napoleon’s abdication in 1815, the Habsburgs reclaimed most of their territories but were facing a rising wave of nationalism from within the country. There was a growing sense of dissatisfaction with Austrian rule from amongst various ethnic groups such as the Czechs and Hungarians. In 1848 the wave of French middle-class revolution reached Austria, but the uprising was swiftly squashed by the Emperor’s armies. However, Austria was at war and suffered defeats at the hands of France in 1859 and Prussia in 1866, following which its power in Europe started to wane.

Subsequently in 1867, Emperor Franz Joseph I accepted the Austro-Hungarian Compromise (Ausgleich) which established the Dual Monarchy of Austria-Hungary under his rule. This multinational empire included a number of diverse ethnic communities, and their persistent drive for independence contributed to the state’s eventual collapse after the First World War.

The event that actually triggered the War was the assassination of Archduke Franz Ferdinand, which happened in Sarajevo in the June of 1914; in retaliation, the Emperor was persuaded to declare war on Serbia, which in turn led to the outbreak of World War I. Before the War even ended in 1918, the Austro-Hungarian Empire began to dissolve as various races declared their independence. In November the Emperor abdicated and the Republic of Austria (Republik Österreich) was proclaimed, thus ending 640 years of the Habsburg dynasty.

Austria had been reduced to a small republic after its defeat in the war and was close to financial collapse, suffering from high levels of inflation and unemployment. A weak and polarised political climate also existed during the economic depression in the early 1930s and civil war soon broke out. Austrian troops then fought off an attempted coup by the Nazis, who assassinated Chancellor Engelbert Dollfuss in July 1934, but Adolf Hitler was determined as ever to absorb Austria into his German Reich.

On 12 March 1938 German troops occupied Austria and the next day the annexation (Anschluss) of Austria was declared, which meant that it was incorporated into Nazi Germany and ceased to exist as an independent country. After much suffering through to the end of World War II in 1945, Austria was occupied for the next decade by the victorious allies (the USA, Soviet Union, United Kingdom and France) who restored the country to its pre-war borders.

The occupation ended in 1955 following the ratification of the Austrian State Treaty which recognised the country’s independence and prohibited unification with Germany. The Austrian Parliament also passed a constitutional law which declared the country’s ‘perpetual neutrality’, and that same year the country became a member of the United Nations. Since then, Austria has prospered as a democratic nation, having joined the European Union in 1995 and the EU Economic and Monetary Union in 1999.

The Habsburgs and the Roman Catholic Church were ardent supporters of the arts, and during the 18th and 19th centuries Vienna became a global centre of culture, particularly in music. Many of the most famous composers of the time were born in Austria, including Wolfgang Amadeus Mozart, Joseph Haydn, Franz Schubert and Johann Strauss, amongst other greats. The patronage of the Habsburg family further drew the very finest composers from all over Europe to come and make their mark in Austria, including Ludwig van Beethoven and Johannes Brahms, who spent most of their lives in Vienna.

Today Austria is host to some of the most spectacular annual music festivals which draw crowds from all over the world to breathtaking settings around the country to hear orchestras, choirs and other groups. The Vienna Philharmonic Concert for Europe is attended each year by over 100,000 people in the stunning open-air setting of Schönbrunn Palace park. The Salzburg Summer Festival started in 1920 featuring opera, concerts and drama, and is recognised globally as one of the most exceptional classical music events today. The Vienna Opera House, home to the Vienna State Opera, is known to be one of the most opulent in the world, with a rich history dating back to the mid-1800s. It’s no surprise the country is sometimes referred to as the ‘Land of Music’, such is the respect afforded to the classical art.

In the era of silent films (1894-1929), Austria was one of the foremost producers of cinematic art. The most famous filmmaker of the time was perhaps Fritz Lang, known for his epic masterpiece, Metropolis. After Germany’s annexation of Austria in 1938, many famous Austrian-born filmmakers and actors such as Billy Wilder, Peter Lorre, Hedy Lamarr and Otto Preminger emigrated to the USA and became globally renowned for their work. More recently, Vienna-born Christoph Waltz received worldwide acclaim for his 2009 and 2012 Academy Award-winning acting performances in Quentin Tarantino movies. But the most famous Austrian actor has to be Arnold Schwarzenegger of Terminator fame, who became a Hollywood icon and also served two terms as the 38th Governor of California.

While religious dramas were popular during the Middle Ages, Vienna became a hugely important centre for German-speaking theatre in the eighteenth century. The Burgtheater was opened in 1741 by Habsburg Empress Maria Theresa and has been host to Europe’s most eminent playwrights, directors and designers throughout the ages. Max Reinhardt was considered one of the most distinguished directors of German-language theatre in the early 1900s, and in 1920 he established the Salzburg Festival with the play Jedermann (Everyman), which continues to be performed there annually.
19th century painters Ferdinand Georg Waldmüller and Hans Makart were the most famous of the time and held in very high regard by Viennese society. Makart influenced a number of artists including Gustav Klimt, who was one of the most important members of the ‘Vienna Secession’ movement that was founded in 1897. Oskar Kokoschka, Herbert Boeckl, Anton Kolig, Josef Mikl, Ernest Fuchs and Anton Lehmden are some of the best known Austrian painters of the 20th century.

Situated in the Hofburg quarter of Vienna is the Albertina museum which features a world-renowned collection of graphic arts, including artworks by legendary artists such as Michelangelo, Leonardo da Vinci, Peter Paul Rubens, Paul Cézanne, Édouard Manet, Amedeo Modigliani, and Egon Schiele.

Austria is famous for its historic castles, cathedrals, palaces and magnificent examples of Baroque architecture. Many of the noteworthy buildings were created during the Habsburg era and influenced by broad styles and cultural movements that arose throughout European history. Gothic and Romanesque styles are most visible in churches and monasteries that date back to the Middle Ages, such as in two of the oldest cathedrals in Vienna, the Minoritenkirche and the Stephansdom. Two of Austria’s most famous Baroque-style palaces are also located in Vienna, namely the Belvedere and Schönbrunn.

The Historic City Centres of Vienna, Salzburg and Graz have been listed as World Heritage Sites in recognition of the extraordinarily rich architectural styles and movements that have been preserved here since the Middle Ages. Some of the other prominent historical styles to be found in Austria include Renaissance, Rococo, Historicism, Greek and Modern. Much of the rural countryside is made up of small towns and picturesque mountain villages that feature farmhouses, generally made of stone and wood, that have been owned by families for many generations.