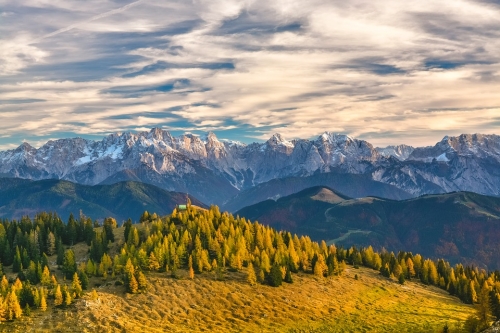 Bright blue skies, high green fields, glassy lakes, fresh mountain air, and rolling countryside will all immediately remind you of the picture perfect Austria. However, there is a lot more than meets the eye to this forward-looking, landlocked European nation than its scenic beauty. This country is located in Central Europe and is bordered by Germany, Switzerland, Italy, the Czech Republic, Slovakia, Slovenia and Hungary. It has a high standard of living and is regarded as one of the safest places in the world.Austria has an interesting past and a vibrant, colorful culture. It has an impressive intellectual heritage, being the birthplace of renowned personalities like Sigmund Freud, Wolfgang Amadeus Mozart, Ludwig Wittgenstein and Franz Schubert. Legendary composers like Ludwig van Beethoven and Johannes Brahms also spent a major part of their lives in Vienna.

Along with its neighbor Switzerland, this country is often referred to as the winter sports capital of the continent. At the same time, this nation attracts thousands of tourists every summer, mainly because of its historic cities and villages. Foreign investors and businesses are also drawn towards Austria’s favorable commercial environment, access to the single European market and private banking sector.

Vienna, the capital, is home to a number of key international entities such as the Organization for Security & Cooperation in Europe (OSCE), the Organization of Petroleum Exporting Countries (OPEC), and the International Atomic Energy Agency (IAEA). At the same time, this city has become the cultural and entertainment hub of the nation, as it is full of museums, concert halls and theaters. Each year, more than 200 functions are held in Vienna alone. You will find amazing architecture from the Baroque era onwards all across the capital.

This breathtaking place has so many diverse experiences to offer that it may be difficult for you to take them all in within a short span of time. It is therefore important for you to list some of the attractions or sites that you must see during your stay. Below are nine places that you should definitely visit while you are living in Austria.

Hallstatt is one of the most beautiful and picturesque towns in the country. From this location, you can explore the spectacular region of Dachstein Salzkammergut, a UNESCO World Heritage Site. A trip to this area is definitely worth the time and effort, as it gives you the chance to explore Europe’s most impressive network of caverns, the Dachstein Caves, which are up to 1174 meters deep in a couple of places.

The main highlight is the Giant Ice Cave. Because of the sub-zero temperatures even during summer, the massive caves are filled with gigantic ice curtains, icicles and sculptures. These mystical grottos of ice and rock can enchant just about anyone with their beauty and magic. 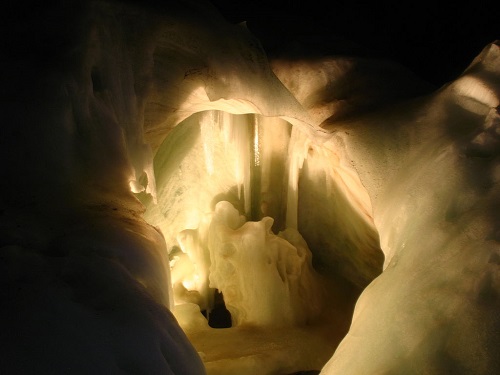 The Mammoth Cave is another interesting spot, because of its pipe-shaped galleries that have been formed by an ancient underground river. Above that, you can tackle the 5-Fingers view platform to admire the stunning vista of the Alps.

The Dachstein Caves aren’t just a gem for nature lovers; music and art enthusiasts can also enjoy the world of ice, especially during August, when the Parsifal Dome transforms into a concert hall unlike any other.

For centuries, Vienna’s Imperial Palace, the Hofburg, was the main hub of Austrian rulers, called Habsburgs. A great amount of European history has therefore been written in these buildings, particularly by Empress Maria. However, things changed towards the end of World War 1. Today, the complex is the official seat of the Austrian Head of the State, the Federal President.

One of the most interesting features of the Imperial Palace is that its major structures represent over 7 centuries of architectural history, because almost every ruler that the country has had since 1275 has ordered some alterations or additions to the buildings. You will therefore find a number of architectural styles, from Gothic to Renaissance, from Baroque to Rococo and even a bit of Classicism, reflected in the Hofburg.

Along with its 18 groups of buildings, 19 courtyards, 2600 rooms, squares and gardens, the complex occupies almost 60 acres of land. Many therefore refer to this place as a city within a city.

As a visitor to the site, you should be offered 3 choices: the Imperial Apartments, the Sisi Museum and the Silver Collection.

There are numerous other interesting attractions in the area surrounding the Hofburg Imperial Palace. Try to fit in a visit to the Austrian National Library, the Natural History Museum or the Imperial Chapel while you are there.

Standing at 1998 meters tall, the Kitzbüheler Horn in the region of Tyrol is one of the most prominent summits in the country. It is easily accessible via Pletzeralm by cableway. You could also choose to climb your way to the top from the village of Kitzbühel.

The view from the summit is nothing short of panoramic, no matter which direction you choose to look in. To the south, the vista extends all the way from the Radstädter Tauern to the Ötztal Alps. You can also see the nearby Kaisergebirge to the north, the Lechtal Alps to the west and the Hochkönig to the east. 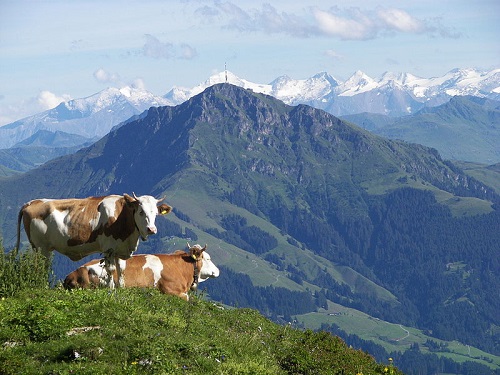 To the south of the Kitzbüheler Horn rises Hornköpfli, a 1772-meter high mountain, which can also be reached by cableway. Its summit has a great view too and it offers visits to Gipfelhaus, a unique mountaintop home featuring an Alpine garden, a restaurant and a chapel.

In summer, this area tends to attract hikers, trekkers and mountain bikers because of its clear path. During the winter months, both mountains are packed with skiers from all over the world, who are interested in testing their skills on the Austrian slopes.

Austria’s tallest waterfall, Krimmler Ache, is an absolute delight for any nature lover, as it plunges down 380 meters in 3 mighty cascades. The tiered waterfall begins at the top of Krimmler Ache Valley or Krimml Achental. Its first drop is 140 meters deep, the second is 100 meters deep and the third is 140 meters deep. Its highest point is 1,470 meters above sea level.

For those who are interested in mountain climbing, it is best to go on an excursion trip for a couple of days, from Krimml Village, which is perched at an altitude of 1076 meters, above the Salzachtal, in a wooded valley.

Apart from the dazzling view of the waterfall, this trip will also reward you with a trek to Schettbrücke, from where you can continue to Krimmler Tauernhaus. However, only the expert mountain climbers should attempt the Glockenkarkopf, which stands 2911 meters high, at the Italian frontier.

The Burg Hochosterwitz is one of the most historically important castles in all of Austria, as it was captured by the Khevenhüllers. In 1570, it was enlarged in the face of Turkish invaders. Since then, the fortress has never been captured by a foe and it has therefore remained with the Khevenhüllers family. To get into this stronghold, there is only one access road, the Burgweg, which is quite steep. It winds its way up 14 defended gates, before opening up into a courtyard. These gates are the landmark of the castle as it was their clever and technically right construction that made the structure impregnable. As enemies tried to conquer gate by gate, they were attacked from different sides.

When visiting this strategically placed complex, it is best to take a guide with you so that you avoid the “fools’ stairs”. Burg Hochosterwitz has numerous interesting sights and it would take you a couple of days to cover them all.

One of the most famous Monastic sites in the world, Melk Abbey’s buildings are laid out around 7 different courtyards. One of the more prominent features of this 325-meter long complex is the western part and its twin-towered church, which rises over a semicircular terrace. 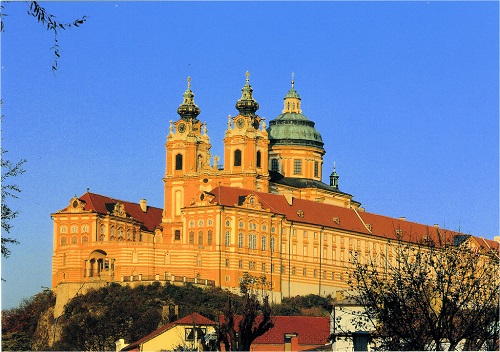 This abbey is perched on a rocky outcrop, quite high above the town of Melk. It consists of many interesting sights like the House of Babenberg, Imperial Corridor and Imperial Rooms. You can easily spend several hours learning about Austria’s past as you tour this complex. Today, this impressive spiritual center is regarded as one of the best examples of Baroque architecture.

A number of cities claim to be connected to the legendary Wolfgang Amadeus Mozart but none of them are as important as Salzburg. This is the place where you will find No. 9 Getreidegasse, the house in which Mozart was born on January 27, 1756. The rooms that were once occupied by his family have now been converted into a museum called Mozart’s Birthplace and are filled with portraits, mementos and instruments. The Mozart Residence has interesting artifacts related to the times and the composer’s life. After getting your fill of history, head to Mozart Square to take a picture with a monument of Salzburg’s favorite son.

While you are in the area, don’t forget to make a trip to Hohensalzburg Castle, one of the largest and most well maintained medieval structures across the continent. The mighty fortress is strategically located on top of Festungsberg Mountain, from where it towers over the whole city, breathing life into the impressive skyline. Inside, you may get to see the Salzburg Bull, which is an organ that has over 200 pipes. Hohensalzburg Castle is a magnificent piece of architecture that represents the heart and soul of Salzburg. No wonder it is one of the top tourist attractions in the country!

Constructed between 1930 and 1935, the Glossglockner Alpine Road is one of the most splendid mountain roads in Europe. This panoramic alpine route takes you all the way up to the Kaiser Franz JosefsHöhe Visitor Center, from where you can get an unobstructed view of the Glossglockner, Austria’s highest mountain.

Being a toll road, a drive through the route can be quite expensive, but the scenery will more than make up for it. While its significance as a route through the Alps has decreased, it is still a fantastic highway that takes you through the country’s highest mountain massif, the Hohe Tauern.

Located right in the middle of the capital city, the Vienna State Opera is nothing short of a stunning architectural wonder. The building is the most celebrated opera house ever and its orchestra is regarded as the best in the world.

If you are an admirer of the performing arts, make sure that you catch a famous opera or ballet here.

The places that have been mentioned above are just some of the most popular spots in Austria and a must-visit for everyone. However, there are many other interesting things to see throughout the country, including the Swarovski Visitor Center, the Museum of the Future, Schonbrunn Palace, the Hohe Tauern National Park, Hofkirche or Court Church, the Spanish Riding School, Seefeld Cross Country Skiing Center, the Golden Roof (Altstadt, Innsbruck), St. Anton Am Arlberg (Tyrol), Graz, Gurk Cathedral, Carnuntinum Archaeological Museum, Faaker See, Krem An Der Donau, Mostviertel, and Eisriesenwelt, to name a few.

Online resources and tourist guides will also give you more information about the spots that are worth seeing. However, it is best to check with your local friends and colleagues about other interesting attractions in the area that you should visit.

What are your favourite places to visit and things to do in Austria? Share your recommendations in the comments!