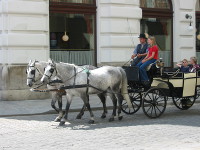 Internationally known for Freud, Mozart and The Sound of Music, Austria is a hub of arts and culture and often quoted as one of the best places to build a new life. If anything, it can feel like there are too many options here; flicking through guidebooks on each city proclaims all of their advantages – of which there are many – and very few downsides. But of course, finding a place that feels like home isn’t just about the number of attractions and facilities that can be packed into one place; it’s about the feel of a city, the way you can walk through the streets and understand that you’re somewhere that makes you feel comfortable.

There is always the option of moving to the countryside, of course, if what you’re looking for is a more peaceful, isolated situation. Moving to somewhere like Schoppernau, a mountainous town in eastern Vorarlberg, affords beautiful views – the town is over 800m above sea level – and a culture of peace and quiet, with only 900 individuals living there in total. But most expat life in this land-locked federal republic focuses around its four main cities: Vienna, Graz, Linz and Salzberg. Which is best for you and yours? We’ve compiled a short guide to each city to help you decide.Vienna is perhaps the most obvious choice for anyone considering a move to Austria. It’s the capital city and the one with the largest population; over 2 million people live in the metropolitan area. A far cry from Schoppernau’s tranquil nine hundred! Famous for being the home of Sigmund Freud, the father of psychoanalysis, Vienna has a thriving arts and music culture, with a wealth of historic buildings only adding to the city’s beauty. But it’s not all art and splendour – it also plays host to a number of international organisations, including the United Nations and oil cartel OPEC. There is an international airport, a good train service and a wealth of buses and taxis available for transportation purposes, so commuting to pretty much anywhere shouldn’t pose too much of a problem. A number of people living in Vienna work in neighbouring countries, and it’s fairly easy to find car pooling services online for people who want to travel into Berlin on a weekly basis. As a place to keep a pied-a-terre, it’s probably unrivalled; the quality of living is excellent, as voted in Mercer’s annual survey, and the thriving arts and culture scene means there’s always somewhere to relax at the weekend.

If you have children who are at university age and you want to keep them close by, Graz and Salzberg are two thriving university cities, both with large populations of students. Salzberg is situated north of the Alps, and has been listed as a world heritage site due to its well-preserved natural beauty. It is also the birthplace of Mozart and the film set for much of The Sound of Music, so if your family ever fancied themselves as a modern-day Von Trapp ensemble, this is a great place to live. Its climate is temperate, but it gets a lot of rain, particularly during summer. Graz, on the other hand, is sheltered from the mountains and closer to the Mediterranean, with more hours of sunshine each year than any other major Austrian city. It is also a world heritage site, and its Old Town is one of the best preserved city centres across Europe. With a population of just over 300,000, it is small in comparison to Vienna, but is still the second largest city in the country. It also has a wider choice of university education than Salzberg, with six universities playing host to over forty thousand students.

Linz is the third-largest city in Austria and the closest to the Czech border at just 19 miles away. It is home to the Danube, the longest river in the European Union and one of the main transportation routes through Germany, Austria, and a number of neighbouring Eastern European countries. Linz has a thriving music and arts culture, with its two main attractions being the Lentos gallery and the Ars Electronica Centre. It’s also worth noting that unless you already have work lined up before you arrive, finding English-speaking jobs in Linz will be difficult. The city is more traditionally-minded than Vienna, and even finding an English-speaking doctor can be difficult.

Each city has its own charms and its own challenges, but Vienna will probably provide the smoothest move for those who don’t speak the language. It’s worth noting as well that Austrian German is different from the language spoken in Germany; although it will be possible to understand the gist of most sentences if you speak fluent German, expect to have to learn local words for some things in order to be able to communicate properly. Being open to learning new things and trying new experiences are essential qualities of expats everywhere, though, and as long as you’re willing to give it a go, there’s no reason why Austria shouldn’t be the perfect new home for you and your family.