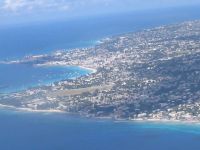 The warm, breezy and picturesque isle of Barbados is well established as one of the major tourist destinations in the Caribbean (coming in at #4 in U.S. News and World Report's current rankings). It is politically untroubled – ranking only behind spotless Canada in Transparency International’s trusted index on corruption – and offers a very high degree of personal freedom (with very minor exceptions like the ban on civilian wear of military fatigues, which are reserved for the Barbados Defence Force).

The administrative divisions of Barbados are known as parishes, of which there are eleven in all. Many visitors, residents and travelers, however, ignore this method of carving up the island and prefer a more simplified division: in this scenario, the island is broken up into Northwest, Southeast, Bathsheba, Bridgetown, and Central Barbados. Whatever one chooses to call them, most of these divisions feature pockets of high luxury typified by panoramic scenery.Bridgetown and environs

The capital of Bridgetown is the most populous region of the island, claiming nearly half of its total residency, and this makes it the obvious choice for expatriates who want to be as close to their work as possible – although the island’s small size does make it so that the average commute is rarely longer than 30 minutes. There are at least ten distinct neighborhoods in Bridgetown, with Fontabelle being one of the liveliest (or, for the pessimists among you, the most tourist-swamped). Fontabelle is brimming with bars, eateries, and music joints, while also hosting the Kensington Oval cricket stadium and – more importantly for expatriates with some connection to maritime businesses – the Deep Water Harbour, which takes in the vast majority of the country’s international shipping. Two other ports exist on the island, but Deep Water Harbour remains the most essential to international trade.

Just a mile and a half away from the busiest areas of Bridgetown, you can come across breathtaking residencies in Christchurch, such as a beachfront villa on 3 acres of land that is now valued at over $22 million. Nature lovers are sure to enjoy being in close proximity to the Graeme Hall Nature Sanctuary and the nation’s only mangrove swamp. The area also offers easy access to an international airport, which boasts direct flights to most international hubs of commerce outside of the Asia/Pacific region.

The western central coast of the island is where you’ll find the parish of Saint James (a.k.a. the “Platinum Coast”), which certainly can’t be ignored in discussions of desirable Barbados neighborhoods. If you’re game, it is home to some of the priciest real estate the country has to offer, as well as being the site of the island’s earliest British settlements in the 17th century. However, if it is exclusivity and separation from the rest of the island’s activity that you’re after, then the individual neighborhoods of Saint James need to be explored in more depth.

Far from being a walled-off enclave for the island’s highest earners, Saint James villages like Fitts Village are known for their busy social life (though social exchanges here are more associated with close friends rather than with a steady influx of strangers). Having said that, though, the prime beachfront real estate in this area is, like many of the residencies in Christchurch, the domain of billionaires. Luxury properties here vary from a stunning Italianite palazzo to multi-building properties containing 9,000 square feet of living space.

Saint James is also notable for its convenient positioning relative to the neighboring parishes of Saint Peter, Saint James and Saint Lucy. Saint Peter’s Speightstown district contains most of the shopping and banking amenities you’ll need if they are not readily available in Saint James itself.

If you are more interested in beachcombing, surfing, and outdoor activities than in maintaining a palatial property, the parish of Bathsheba may present an alternative to some of the locations mentioned above. Beachfront condominiums here are available for rental prices hovering around $20,000 annually, and there are numerous other multi-bedroom properties that, while not reaching the stratospheric pricing of the Saint James and Christchurch residencies, are still very worthy investments of several million dollars, and highly likely to increase in value. Farley Hill National Park is also located in Bathsheba, where numerous musical festivals take place, and many natural wonders are on hand nearby in the Flower Forest and Andromeda Botanic Gardens.

The South Coast is another major tourist area where – you may notice a pattern here – you can count on lively and/or noisy nights in the commercial and entertainment centers. It is a prime destination for snorkelers and windsurfing enthusiasts. Luxurious rental villas here seem to be quite common – starting at around $250 a night – which make this area a good one for visitors to temporarily reside in while seeking out more long-term living arrangements and getting their bearings on the island.