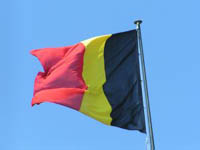 This co-educational school includes preschool, prekindergarten, kindergarten, elementary, middle and high school.Founded in 1967 and located in Antwerp, it began with just 65 students. Antwerp International School, which celebrated its 40th anniversary in December 2007 has about 450 students today.

Established in 2000, the British International School of Brussels is a primary school with separate infant and junior departments. Located in the south of Schaerbeek, it follows the English National Curriculum and has students belonging to more than 30 nationalities.

Situated near Brussels at Sterrebeek in the municipality of Zaventem, this school opened in 1967 and serves as a Department of Defense Dependents Schools (DoDDS) private school for the dependents of US diplomatic and military personnel. It also enrolls European students from countries that are part of the NATO Partnership for Peace initiative.

European School of Brussels I

Located in the Brussels-Capital Region of Belgium, in the municipality of Uccle, The European School of Brussels I opened in 1958 and has the reputation of being the second European school in Europe.

The European School of Brussels II is among the 14 European schools in Belgium and among the four that are located in Brussels. Situated on Avenue Oscar Jespers, the school has about 3000 students enrolled across the nursery, primary and secondary years. It also has Dutch, English, French, German, Italian, Finnish, Swedish, and Portuguese sections.

Located in the municipality of Ixelles (Elsene), the European School of Brussels III has approximately 3000 students and is headed by principal director, Antonio Pino. Apart from the curriculum, the school also provides a range of extracurricular activities.

Located in the municipality of Mol in Antwerp, the European School was started in 1960 for children of Central Bureau for Nuclear Measurements (now Institute for Reference Materials and Measurements) and Belgian Nuclear Research Centre personnel. It also enrolls children from other overseas families who live and work in Belgium.

Approximately 1500 students between the ages of 2 ½ and 19, and belonging to 62 different countries, study at the International School of Brussels. The school has a 40-acre campus and is located at Watermael-Boitsfort.

A US Department of Defense Dependents high school for students in grades 7 to 12, SHAPE American High School is situated at Casteau and imparts educated based on the United States curricular program. In 2014 – 2015, the school will be separating into the SHAPE Middle School and SHAPE High School.

The new name of this school is ISF Waterloo (ISF. It is located in Sint-Genesius-Rode and imparts international education in English. The primary years follow the International Primary Curriculum (IPC). Students of the Middle Years are prepared for the University of Cambridge International Certificate of Secondary Education.