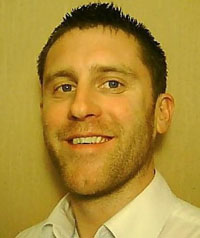 My name is Oli Duncan, I’m 34, and a freelance writer.

My work to date includes sports documentary scripts, feature articles for travel magazines, and content for luxury services websites. I’m currently finalising the script of an off-beat thriller, planned as a 6-part TV series.
I’m from Suffolk, in South East England originally, and I’ve lived in Scotland, France, Italy, and Belgium.
I’m a sporty type, with a passion for music, and a love of stand-up comedy.Where, when and why did you move abroad?

I moved to Scotland in 1998 to study at the University of Aberdeen, but I don’t think that really counts as abroad.

My first real move abroad was in 2002, after graduation, when I moved to Brussels, in Belgium. I moved to take up my first proper job, as a technical writer with a European institution. I had always planned to move to France or Italy after graduation, as I fell in love with both countries following a study year in the French Alps.

In the end I headed to Brussels as the job opportunities are so good, and I’d heard great things about the city and its people. I was also intrigued by a country divided by language, yet with a capital that was home to the European Union.

I’d say the biggest challenge was adapting to the more relaxed, less pro-active approach to customer service that I encountered at every turn. I was disappointed by the slow pace of tradesmen, service providers, and customer support in general.

It certainly takes longer to get things done, and the customer is certainly not king in Belgium, indeed at times the customer can seem to be no more than a distraction between coffee breaks. I found that an extremely polite and respectful attitude would help to get things done, and that building a personal rapport was far more effective than any contractual obligation, as indeed it should be.

I found an apartment online, using a local property search engine. It took a while to get used to the local terminology, and rental conditions regarding deposits, contracts and so on, but I found that this more integrated approach allowed for a far wider selection of properties.

I also spoke to local colleagues for advice as to suitable neighbourhoods. This allowed me to broaden my search area, and to make sure I was close to a Metro underground station. I moved to a relatively unfashionable district, but with great value for money, access to fantastic parks, and excellent transport links.

Brussels is a city of many small villages, each with its own distinct character and inhabitants. My neighbourhood was not so popular with expats itself, but was a short stroll from the European district, centred around the site of the European Commission building, the Berlaymont. This neighbourhood is extremely cosmopolitan thanks to the numerous European Institutions and their organisations.

Brussels is a compact city so it’s possible to go from upmarket international neighbourhoods, through an unfashionable, relatively disadvantaged area, and then back to the plush surroundings of the diplomatic quarter, with imposing embassies and chauffeur-driven limousines, and then on to the royal palaces and their parks, all within a 20 minute stroll.

A culturally diverse city with excellent public transport, Brussels is a city of expats with something for everyone, in a truly global sense.

Belgium enjoys a truly unique culture and character, and I found that the people of Brussels in particular have a delightful sense of humour, with a love of the absurd, and a playful, irreverent streak which I found very appealing. They also embrace alternative cultures and lifestyles, making for a refreshing innovative cultural landscape. This suited me well, so I got on well with the locals.

Belgium also enjoys a rather special relationship with its proud tradition of Trappist beers, which certainly helps to break down cultural and language barriers! Brussels is a truly international city, and one really senses that the locals appreciate the cultural wealth that this brings to their city, making for a tolerant, welcoming atmosphere. Inevitably this applies less to the provincial areas to the North and South.

I enjoyed 5 fascinating years in Brussels. Besides the humorous, fun-loving attitude of the city, I also enjoyed the variation of the country’s landscapes and cities as a whole.

The subtle landscapes of the North Sea coastline are a great escape from the city, and they are accessible through a network of canals that are ideal for a Sunday bike ride on safe, well-maintained cycle paths.

The beautiful cities of Flanders are also a delight, and Bruges is a notable highlight, increasingly enjoying the acclaim it deserves, for its sublime medieval architecture and tranquil atmosphere.

To the south of Brussels, the rolling hills of the Ardennes provide a slower pace of life, characterised by Spa, and its luxurious therapeutic bath resorts. Meandering rivers marked by ancient castles make for some truly delightful sightseeing and peaceful boat trips.

The legendary Spa-Francorchamps race circuit is also found here, and a trip to the F1 Belgian Grand Prix is a memorable high-octane highlight.

A country with such a complicated political make-up can be hard to navigate. Even in Brussels a remarkably international city, you must be careful not to step on toes. Certain neighbourhoods are officially Flemish-speaking, despite a majority of French speakers. Speak French to an official here and you are likely to get a very frosty response.

This is one of the world’s rare places where you are better off just speaking English than attempting to speak the lingo. You get used to these issues, and learn to work around them, but there is a negativity that underscores these reactions, that is to Belgium’s great detriment – a shame for a country with so much going for it, and a paradox in such an exceptionally tolerant and open city.

Embrace the diversity of this unusual and varied city, and this maddeningly schizophrenic, bilingual country. Don’t live in the expat bubble, dare to live outside your comfort zone and the traditional expat neighbourhoods. Take public transport, get to know the city properly, and venture off the beaten track.

I got so much from my stay by simply immersing myself in the city, adapting to their way of doing things, and leaving any preconceptions at the airport. This tolerant approach will allow you to enjoy so many new experiences, and to enjoy so many unexpected and unpredictable delights. I left Brussels with an undying love of Turkish cuisine, and I certainly never expected that when I decided to move to Belgium!

I now live in the South of France, near Monaco, where I continue to work as a freelance writer. My decision to move here from Brussels was largely a lifestyle choice, as I wanted a warmer, gentler climate in order to enjoy a more active, outdoor lifestyle.

I now have easy access to the Alps and the Mediterranean, ideal for a keen skier and beach lover. I plan to stay here for a while, as I enjoy a balanced lifestyle here, thanks to the same immersive, tolerant attitude that I take to any adoptive home.

There is a significant expat community here too, and a 90 minute flight takes me home whenever I miss the delightful sense of humour and slightly less charming weather of the British Isles.

One day I may decide that I miss living in an English-speaking country, with the ease of communication and cultural harmony that goes with it. I have always been attracted by Australia, a destination that ticks so many boxes, so Down Under may well get the thumbs up if I decide to move on.