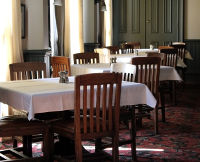 The Belgian capital of Brussels offers rich culinary fare through its many Michelin-starred restaurants that can be found in almost every part of the city. In fact, Brussels stands proudly alongside Paris, New York and Honk Kong as one of the finest cities for eating. Here are five great restaurants in Brussels that will allow expats to indulge in an exciting gastronomical experience.

Christened by its founder, George Cuvelier, in 1926, to mean ‘like home’, the restaurant has remained in the family through the years. Today, a passionate chef, Lionel Rigolet, has the reins.The proud recipient of two Michelin stars and membership to the prestigious association of restaurants, Les Grandes Tables du Monde, Comme Chez Soi has enjoyed a respectable reputation for its Belgian fare for many generations now. You can avail of their renowned three-course or à la carte menu. If you prefer a more intimate dining experience, there are private rooms and banquets. If you want to be where the action is, sit at their ‘kitchen table’, which places you literally in the kitchen, where you can watch the chefs doing what they do best.

Here, the emphasis is on freshness, and chef Christophe Hardiquest plans his menu based on the fresh produce available in the local market. In addition, Hardiquest is inspired by molecular gastronomy and likes to transform familiar ingredients using new preparation methods. The restaurant opened in 2001 and received a star in the 2011 Michelin Belgium guide. Located in the upscale neighborhood of Uccle, it has now become so popular that you may have to book a table for dinner several months in advance. Bon-Bon has a relatively small dining room that seats just 40, but there is also an adjoining bar which opens into the kitchen, where you can sit while you watch the delectable eats being created.

When Chef Yves Mattagne started cooking at the Sea Grill restaurant, located inside the Radisson Blu Royal Hotel in Brussels, he focused his attention on seafood. The result is a seafood menu filled with robust flavor and characterized by impeccable technique. As of 2013, the restaurant can boast of an award from Les Grandes Tables du Monde and two stars in the Michelin guide. Even though Yves Mattagne is known to keep his menu dynamic and fresh, one specialty always remains – Homard à la Presse. If you love lobster, be sure to try this dish that uses a special device to press the lobster and collect the juices, which are then blended into a mousse that goes along with the lobster.

At La Truffe Noire, the truffle is king. The menu features inventive truffle dishes created through dedicated attempts to blend black and white truffles. This Michelin star restaurant offers a range of tasting menus with inventive recipes sure to tickle any connoisseur’s taste buds. These include the carpaccio of bleue des près, which is a special type of Belgian beef with shaved black truffles. Even the deserts are truffle-themed, with dishes such as black chocolate truffle in a spun sugar nest with fresh raspberry sauce. The owner, Chef Luigi Ciciriello, is known to be passionate, not only about truffles, but also about his guests. Not only is he involved in the preparation of dishes, but he also makes it a point to chat with his guests. The restaurant is not centrally located, but does stand in the middle of a luxurious neighborhood. It is also quite close to the Bois de la Chambre, an urban forest and a great place to relax before or after meals.

Alexandre was opened to guests in May 2010, and received a Michelin star later that same year. The young founder, Chef Alexandre Dionisio has trained with some of the top chefs in the city, and has already gained much recognition for his exciting menu that emphasizes fresh, seasonal produce. Some popular dishes include oysters in chicken gravy, salmon marinated in soya, and marshland broad beans.

A few other restaurants that are quite popular among expats include Noordzee / Mer du Nord – known for its seafood; Jaloa – for its fine dining experience; and Le Coin des Artistes – which is more like a cozy neighborhood restaurant.